Reliving Super Bowl LII and the magic of Nick Foles 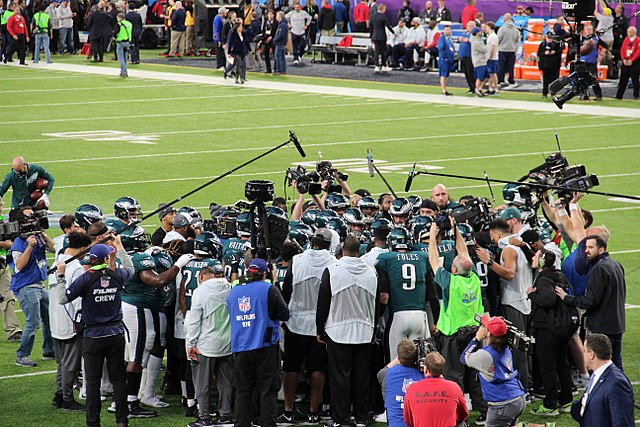 What happened in Super Bowl LII?

The Philadelphia Eagles were not expected to win a Lombardi trophy in the 2017-2018 season after Carson Wentz suffered a torn ACL and PCL in Week 14 against the Los Angeles Rams. Wentz held an incredible 11-2 record while throwing 33 touchdowns to 7 interceptions in the regular season. It was clearly a tall task for Foles to step in to replace the strong MVP candidate at QB and lead the Eagles to playoff success. Well, it was safe to say the Rocky Balboa-like underdog in Nick Foles rose to expectations in the QB1 chair.

Foles did a superb job of replacing Wentz in the Rams exhibition — as he unveiled a crucial completion to Nelson Agholor on 3rd and 7 with 1:45 remaining. After the Rams showdown, he tossed four touchdowns and led his team to a victory against the despised NY Giants. He would pick up his second victory as a starter against the Las Vegas Raiders the following week and then he only threw 11 pass attempts in the Eagles meaningless last game against Dallas — which resulted in an Eagles loss.

Foles wasn’t a rockstar in the Eagles divisional contest, but he did mop the floor against the Minnesota Vikings in the NFC Championship game. He threw three touchdowns and ousted 26 completions on 33 pass attempts against a Vikings defense that did a nice job of rattling Drew Brees in the divisional round (as Brees tossed two interceptions and failed to throw a touchdown until the third quarter).

After Foles and the Eagles squashed opponents left and right without their field general in Carson Wentz, Foles would then prepare for the grand finale against Tom Brady and the loaded New England Patriots. The Pats were sincerely an AFC juggernaut heading into the big dance. The Brady bunch beat the 11-2 Pittsburgh Steelers late in the season and demolished the Tennessee Titans in the divisional round by a score of 35-14. They opened up as 4.5 point favorites against the Eagles. It would be an understatement to say Foles defied expectations and played lights out in Super Bowl LII — as he unleashed 3 passing touchdowns and even caught a touchdown from Tim Trey Burton on the infamous “Philly Special”. The player that nearly walked away from football deservedly won MVP of Super Bowl LII and earned a non-handshake from Tom Brady.