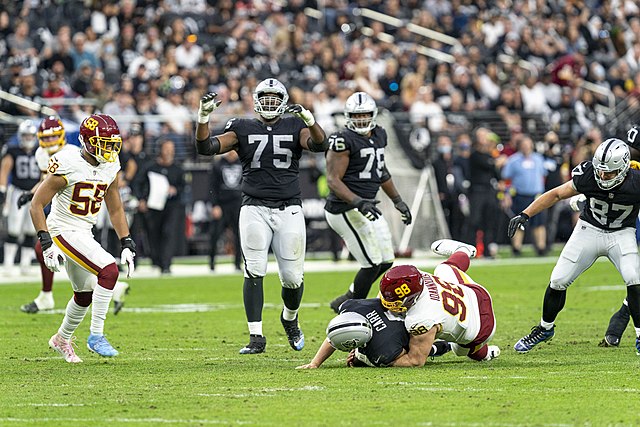 What is the Raiders offensive line outlook?

The Las Vegas Raiders have lots of firepower on offense (Davante Adams, Darren Waller, Josh Jacobs, and Hunter Renfrow), but they haven’t had close to successful offensive line play as of late. The Raiders sadly allowed the 12th most sacks last season. It’s safe to say that the Raiders current OL is drastically less impressive than its prior unit with Rodney Hudson, Trent Brown, and Richie Incognito.

It’s clear that the direction with the Raiders OL still isn’t inspiring, to say the least. The current starters are slated to be Kolton Miller, Denzelle Good, Andre James, Dylan Parham, and Alex Leatherwood. PFF didn’t give the Raiders OL a generous ranking (29th in the league) heading into the season.

Miller was actually a stud last season – as he garnered an 84.0 grade by PFF. Marcus Mosher of Raiders Wire noted how Miller surprisingly wasn’t ranked as a Top-10 OT heading into the 2022 season. Nonetheless, there isn’t any reason that Miller doesn’t oust a Pro Bowl spot if he can play well against the daunting AFC West pass rushers. John Simpson really needs to find consistency moving forward. Simpson did improve in the back-end of last season, as he did a fantastic job against the All-Pro Deforest Buckner.

The center Andre James hasn’t been the righteous replacement for Hudson. He garnered a 64.1 grade by PFF last season. I believe the Raiders will likely target a center in the 2023 draft. The RG Denzelle Good has struggled in his young career. He has been a bottom-half guard in each of the past two seasons. In poetic fashion, the Raiders have a weak link at RT, as well. Alex Leatherwood hasn’t been a reliable force – as he snatched a very lousy 45.0 grade by PFF. Although, the 2021 first-round pick undoubtedly carries more potential than the other lesser proven OL.