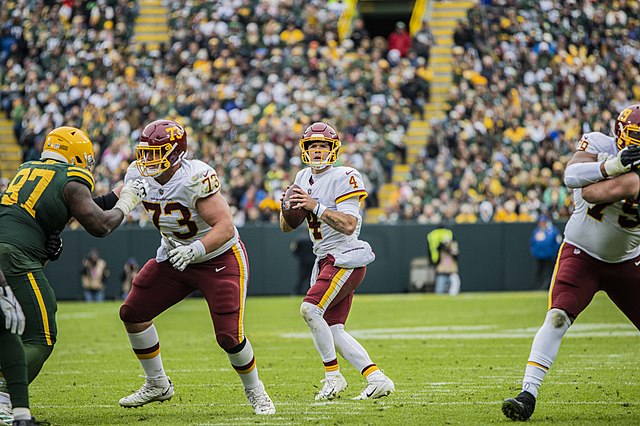 What is the outlook for the Commanders offensive line?

The Washington Commanders offensive line lost some pork this off-season (after losing Trent Williams in the 2020 off-season) – as they witnessed the five-time Pro Bowl selection Brandon Scherff exit the team. Scherff inked a hefty contract extension for three years worth $49.5 million with the Jacksonville Jaguars.

The current offensive line starters for the Commanders are Charles Leno Jr, Andrew Norwell, Chase Roullier, Wes Schweitzer, and Sam Cosmi. PFF ranks the Commanders OL as the 15th best OL unit in the league. Charles Leno Jr. was easily the most underrated Commanders player last season and a saving grace for Taylor Heinicke. Leno Jr. garnered an impressive 81.2 grade by PFF for his 2021 performance. They will also anticipate immediate production from Andrew Norwell, who inked a two-year contract worth $10.2 million dollars with the Commanders. Norwell was really a smart replacement option for Scherff (as both guards swapped teams).

Roullier will plan to be a force and x-factor for the Commanders OL. Commanders Wire noted how Roullier was pegged as a Top-10 center by PFF heading into the 2022 season. Wes Schweitzer is a modest people mover and pass blocker (1 sack allowed), who notched a 78.7 grade by PFF last season. He is bound to hit free agency after the 2022 season. The Commanders will also anticipate that Cosmi can be an effective RT – as he obtained a 74.9 grade by PFF in 2021. Cosmi will be a FA in the 2025 off-season.

The Commanders allowed the 10th most sacks last season. Their OL wasn’t potent, but Heinicke also wasn’t exactly the most aware signal-caller. I trust that the Washington pass protection should noticeably improve with experience and a somewhat wiser QB. I anticipate may not have the “Great Wall” for an OL, but they can certainly shine against any pass rush if they stay healthy. The Commanders new field general won’t be going back in time to a previous porous OL that he was a part of, to say the least.