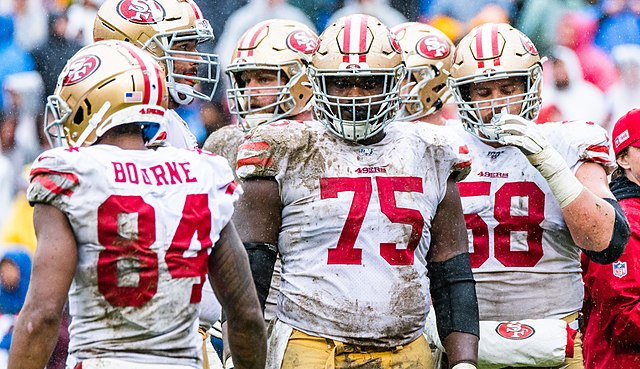 Reflecting on the 49ers depth chart

The offensive wiz Kyle Shanahan recently released the 49ers first depth chart. The 49ers obviously have a new face at quarterback with their switch from the savvy veteran Jimmy Garoppolo to the young, dual-threat QB with unearthly expectations: Trey Lance. Nonetheless, there are plenty of other fascinating observations revolving around their depth chart. Hence, I’m going to untwine five takeaways from the 49ers depth chart.

The San Francisco 49ers moved on from the off-side devil, Dee Ford, with aim of having Drake Jackson (2022 second-round pick) be an immediate impact player in his first season. The 49ers All-Pro LT Trent Williams has been very impressed by the rook DE. Per NBC Sports, Williams stated, “He’s always got his book in his hands, he’s always doing a little extra. I notice him. I think he’s going to be an outstanding player. Especially having a coach like Kocurek and learning from a guy like Nick, (Arik Armstead), all those guys he’s got right at his call, he’s going to be an outstanding player.”

The 49ers RB Trey Sermon was a bit of a disappointment in his rookie campaign (167 rushing yds and 1 rushing TD), but he has actually been impressive this off-season as of late. It should also be noted that he has been training with none other than Dalvin Cook, so his progress shouldn’t be a complete surprise. Sermon is a wildcard – as he could be the RB2 or RB4 in the 2022 season. However, he’s definitely looking like a nice complement to Elijah Mitchell at this point in time.

The 49ers seventh-round pick in the 2020 draft, Jauan Jennings, unveiled 282 yards and 5 TDs last season. He’s one of the x-factors in the 49ers offense moving forward and his growth will be vital for his young QB. Jennings will undoubtedly have quality match-ups w/ Deebo Samuel, Brandon Aiyuk, and the mythical George Kittle next to him. Jennings is also in the last year of his contract, so it’s vital that he shows out in 2022.

The 49ers have really been patient with the talented, injury-riddled, Jason Verrett. The former Chargers CB is still trying to work back from his season-ending ACL injury that occurred in Week 1 of last season. Shanahan wants him ready for Week 1 and that’s Verrett’s mindset, as well. With that said, Shanny has expressed that they won’t rush him back & that they will insert him at the right time – whether it’s Week 1 or even Week 8.

The 49ers aren’t only talented on offense and defense, but they also exhibit a special kicker by the name of Robbie Gould. The former Bears K ousted an 87% completion percentage (missing three FGs) in 2021. He will be a free agent after this upcoming season, so it will be important that he has a strong 2022 season at this stage in his career.