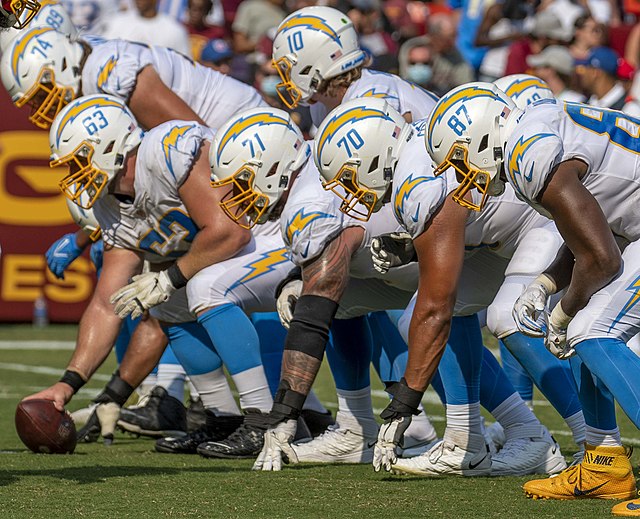 The talented blind-side LT Rashawn Slater had an amazing rookie campaign — via allowing only four sacks last season, while garnering a potent 83.6 grade by PFF. His efforts led him to make the Pro Bowl, second-team All-Pro, and even fourth in the OROY voting. Slater will continue to improve his craft by going up against the mighty Khalil Mack in practice.

The ole-reliable center Corey Linsley will aspire to be the second-best OL in 2022. He impressively obtained first-team All-Pro honors in 2020 and then cracked second-team All-Pro honors in 2021. Linsley obtained a quality 85.7 grade by PFF. Linsley (who has only missed three games in the past four seasons) is under contract with the Justin Herbert-led team until the 2026 off-season.

The former Green Bay Packers center has spoken highly of the rookie right guard Zion Johnson. Per “Bolts From The Blue”, Linsley said the following about the Chargers 2022 first-round pick, “He’s living up to the Bill right now. It’s the first day of pads but everything we thought was true. He’s a really good player. He’s got a ton of raw talent that you can see he’s already put a lot together and honestly, the sky’s the limit. He’s very talented and I’m excited to play next to him.” It’s clear that Linsley may see more in Johnson than the rookie sees himself. The other guard, Matt Feiler is likely the weakest link on the Chargers OL and he’s still a modest player – as he garnered a 74 grade by PFF last season.

I expect the Chargers starting RT to be none other than Trey Pipkins in Week 1. He improved in the back-end of last season after struggling in the early portion of the year. It will be crucial that the former D2 legend that has yet to play 16 games in a season can stay healthy and be lethal against the impressive AFC West pass rushers.