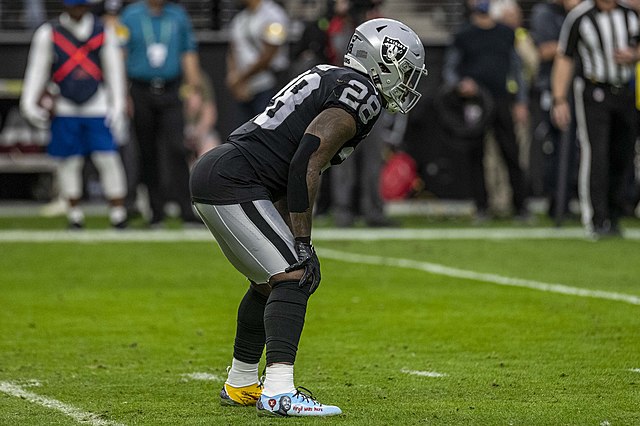 The Las Vegas Raiders running Josh Jacobs has been a rumored trade candidate after having seven touches in the HOF game. The amped-up Josh McDaniels has clarified that they have no intentions of trading Jacobs. With that said, I’m going to untwine three reasons why McDaniels isn’t bluffing and why it would be sacrilege for LV to ship away Jacobs.

The Raiders undoubtedly compete in the most sinful NFL division: AFC West. I already have pegged the Raiders as the worst team in the division that features the Greek God-like QB Patrick Mahomes, Super Bowl MVP signal-caller Russell Wilson, and the ascending, mega-arm Justin Herbert. It would be more difficult for the Raiders to thrive in their heavy-weight division if they also traded away a pivotal piece of their offense in Josh Jacobs. He ran for 1,065 yards and 12 TDs in 2020 & 872 yds and 9 TDs in 2021.

Jacobs hasn’t only been a productive ball-carrier, but he is still a young gun (as he turned 24 years old in February). He’s four years younger than the Incredible Hulk-like RB Derrick Henry and two years younger than the utterly imposing RB Nick Chubb. Jacobs can be a monster RB for the Raiders for many years to come. Davante Adams is also 29 years old, so it’s crucial that they have a pivotal play-maker for many years during the demise of Tae’s career.

Jacobs is the thunder ball-carrier amid the Raiders RB group. He is the downhill RB that can break a defense down by a thousand cuts. Meanwhile, Kenyan Drake is the all-purpose RB that excels in space. Drake notched more receiving yds (291) than rushing yds (254 yds) in 2021. Zamir White has the make-up to be a talented RB, but he’s also an unproven rookie. It would be risky for McDaniels to pull the plug on the talented, young, bull-dozing RB at this point.