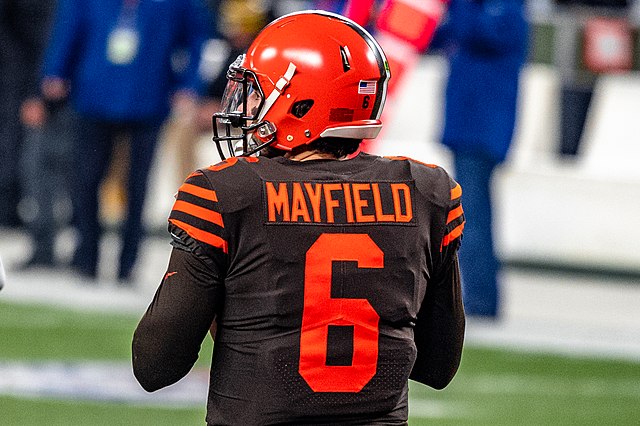 As most if not all of us know by now, former Cleveland Browns #1 overall pick Baker Mayfield was traded to the Carolina Panthers this offseason.  With this, we will now get to see Baker with some more offensive weapons, such as Christian McCaffrey and DJ Moore this season.  However, for those of us interested in fantasy football, he is somewhat of an enigma.  For two seasons he has been really solid, two seasons he has been very bad.

In this article, I will be covering the overall outlook of his season, both a ceiling and a floor, as well as my prediction as to what range of QBs he might score nearby.  So, without further ado, let’s start with his absolute peak:

The absolute ceiling of Baker Mayfield would be roughly what we saw in 2020, except give him more weapons on offense.  Baker can play up to the level of a top 10 QB, as in that season he put up the following stat line:

This is below his ceiling still, as that was with weapons that were good, but not amazing.  In order for Baker to hit his peak, he would need Christian McCaffrey to remain healthy for a good portion if not all of the season.  Having a top 5 back out of the backfield who is easily one of the best satellite backs in the league makes your job much easier as a quarterback.

The Panthers offensive line would also need to see improvements from last year, which it certainly should with the draft addition of Ikem Ekwonu.  They also need to find their true WR2, as Robbie Anderson is good, but had a down year last season without a doubt.  Potentially look for Terrace Marshall Jr. to make this leap next year and give Baker a shot at being this top 10 QB in fantasy football scoring.

The absolute worst I could expect Baker to do would be something like last year but partially worse.  There are a few reasons why this could happen:

These would be the main four reasons as to why I could see Baker failing this season, or at least not performing at a high level for fantasy purposes.  His floor could go even lower than 25th for sure if some combination of the above issues occur, specifically his injury being a bother and allowing Darnold or Matt Corral to start for a portion of the year.

My expectations for Baker – QB13-QB18

I personally believe there is a median between his ceiling and floor that is where he will find himself this season.  A new scheme to learn, a head coach who has not proven much at this level, and some question marks at TE and WR2 lead me to believe he will struggle early in the year.  However, there is a good shot he finds his footing later in the season and recovers his fantasy value, especially for the fantasy playoffs.

Baker is a good player to pick up in a dynasty league if available in case he performs well this year, as he could be used as a trade piece or even be used in a rotation, potentially in a 2 QB league.  In re-draft, he holds some value as a backup in case your starter performs to a low level, but other than that I would not rely on him as a full-time starter unless proven otherwise.