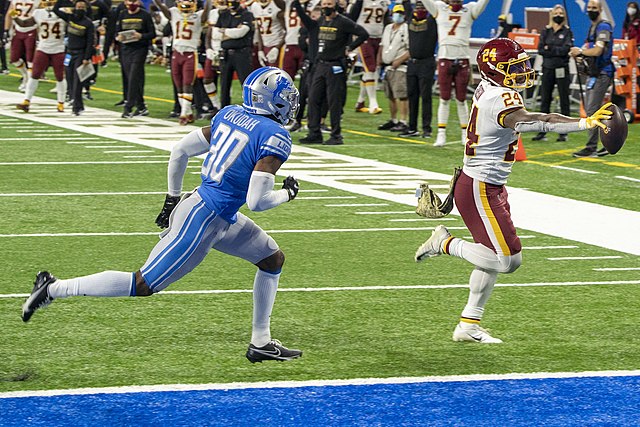 What to expect from the Lions secondary in 2022

I honestly don’t love the direction of the Lions pass defense (although, let me finish). They have a young secondary and there is certainly potential with the Lions secondary. Amani Oruwariye (fifth-round pick in 2019) hauled in a very impressive six interceptions while ousting 11 pass deflections. PFF handed Oruwariye a 59.0 grade – which come off as a bit of a surprise given his interception count. The other (current) starting CB, Will Harris, was a dreadful (which is a nice way to phrase it) safety in 2021 – as he unleashed a 42.6-grade last season.

The growth of Jeff Okudah might not reflect his draft worth, but he should help the Lions pass defense improve from 2021. He’s expressed how he is hungry this off-season. It needs to be noted that he is essentially a sophomore CB – due to the fact that he missed his entire second NFL season. Okudah may even start over Hill as he combines his experience with talent.

The FS DeShon Elliot was a fine pick-up by the Lions this off-season. The 25-year-old had a modest 65.6 grade via PFF last season. He expressed that he felt confident in Aaron Glenn – which led him to ink a deal with DET. Meanwhile, they also carry a modest safety in Tracy Walker (who turned down heftier offers to stay in the Motor City). Walker unveiled a 63.8 grade by PFF last season. The Lions safety tandem is unequivocally the highlight of the Lions pass defense.

It’s clear that Lions fans should know their secondary won’t be built in a day. The Lions pass defense will likely be floating around the 20th best all-around unit next season, but I want to conclude a few positive aspects of the Lions secondary. The Lions secondary (and a fired-up Aaron Glenn) should be more potent than last season, Oruwariye could realistically punch a ticket to the Pro Bowl, and the future is honestly bright for the Lions pass defense.