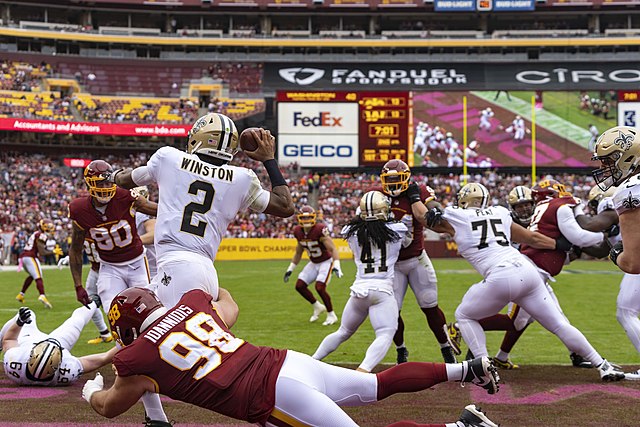 Who is the most overrated quarterback?

The NFL has profoundly magical quarterbacks in Tom Brady, Aaron Rodgers, Patrick Mahomes, Russell Wilson, Josh Allen, Justin Herbert, Joe Burrow, Lamar Jackson, Matthew Stafford, Dak Prescott, and Matt Ryan. After the first wave of gifted quarterbacks, there is an abundance of quarterbacks that have made flashes of greatness but are still regarded as overrated in my opinion. With that stated, I’m going to untwine five overrated quarterbacks entering 2022.

The Tennessee Titans signal-caller, Ryan Tannehill, looked worse than the 2020 version of Mitchell Trubisky last season. Tanny only unveiled 21 passing touchdowns (to 14 interceptions) & completely sunk in the playoff contest against the Cincinnati Bengals. The Titans QB threw one touchdown, three interceptions, and finished with a QBR of 66.7. I believe the Titans made a mistake hanging onto Tannehill this off-season, especially after shipping away A.J. Brown and witnessing Derrick Henry age a bit more. I foresee Malik Willis having the keys to the offense by the mid-point of the season.

I believe the Carolina Panthers made too desperate of a choice to bring in Baker Mayfield this off-season. Mayfield hasn’t made a single Pro Bowl in his career. He’s also thrown 13+ interceptions in three of his four seasons. I don’t believe the outlook is pretty for Matt Rhule and Mayfield in the loaded NFC South. I have an itch that CAR will bring in a new, offensive-minded HC and a QB early in the 2023 draft next off-season.

The New York Jets quarterback receives a ton of hope and buzz (mostly for his infamous hand gesture and touchdown), but he honestly had a dreadful rookie campaign: nine passing touchdowns, 11 interceptions, and 2,334 passing yards. It was a complete surprise to me that the Jets only brought in Joe Flacco to pair with the former BYU signal-caller this off-season. Wilson must have a 2022 season similar to the 2021 version of Mac Jones (at least) with the Jets weapons (Elijah Moore, Corey Davis, and Garrett Wilson).

I am jumping from the bandwagon on Jameis Winston being an underrated QB to him being an overrated QB. He undoubtedly was an efficient QB in his seven-game stint last season. However, it is yet to be seen if he can be consistent and clutch over a 17-game span in the upcoming season. Furthermore, he doesn’t have Sean Payton in his corner moving forward. Let’s not forget that he will certainly miss LT Terron Armstead – as the rookie Trevor Penning has already displayed growing pains as a pass-blocker. Winston should continue to be better than his days in Tampa Bay, but can he bring the Saints back to the post-season?

The Philadelphia Eagles QB Jalen Hurts has garnered a lot of praise and very favorable projections. Nonetheless, it’s vital to remember that he didn’t exactly blow defenses out of the building in 2021 (3,144 passing yds, 16 passing TDs, 9 interceptions). With DeVonta Smith AND A.J. Brown, he needs to crack his first Pro Bowl nod and bring his team back to the NFC playoffs.