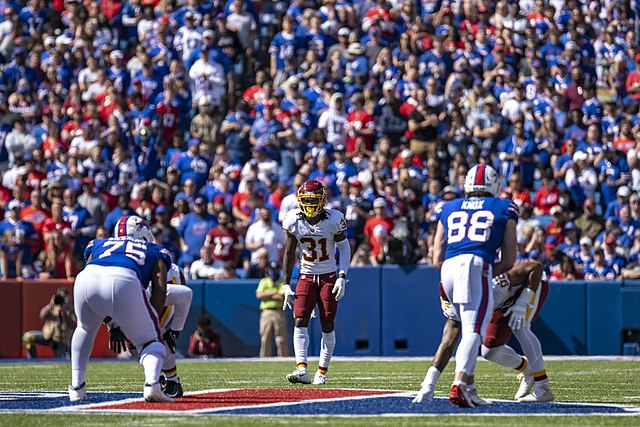 The San Francisco 49ers TE George Kittle is still a talented profile, but he doesn’t have the sexiest outlook in my opinion. Kittle is coming off his worst season of productivity and he has an uncertain QB as his starter. If you feel iffy about Trey Lance (similar to me) then you should sell Kittle to someone that is head over heels for Lance.

I also expect Brandon Aiyuk to be a major factor in the 49ers offense moving forward.

It may seem blasphemous for a lot of fantasy die-hards and Iowa fans to pin Kittle and Hockenson on this list. Nonetheless, I don’t foresee a pot of gold on the other side of the rainbow for the Lions TE. The Lions will have more magic lined up for Jameson Williams, D.J. Chark, and D’Andre Swift. Of course, Jared Goff isn’t the most reliable cannon, as well. He is still catching a lot of buzz for his Pro Bowl nod in 2020 – which was a 723 yd and six TD outcome.

The Bills TE Dawson Knox had an impressive nine touchdown catches last season, but his new teammate, O.J. Howard, should slightly dock Knox’s popularity and attract a lot of attention from Josh Allen. According to ESPN stats and information, the Bills only ran 100 plays with two TEs last season – which was the lowest in the league. It would be an understatement to say the Bills will use a lot more two TE sets in the upcoming season and Howard will eat up a big part of the TE pie.

The Atlanta Falcons made a very bold move in making Kyle Pitts the highest drafted TE in NFL history. Pitts had a modest rookie campaign – as hauled in 1,026 receiving yards. Although, I foresee Pitts taking a step back w/ the QB switch from Matt Ryan to Marcus Mariota. It’s also an uncertain long-term outlook for the Falcons QB group.

It could be said that Seattle is where TEs go to die. The Seahawks have a shaky QB situation, to say the least. It should also be noted that the Seahawks QB1 will key in on DK Metcalf and then Tyler Lockett in the offense. Noah Fant has had modest performances (600+ yards in each season) in each of the past numerous seasons, but he shouldn’t climb the ladder with the Hawks.