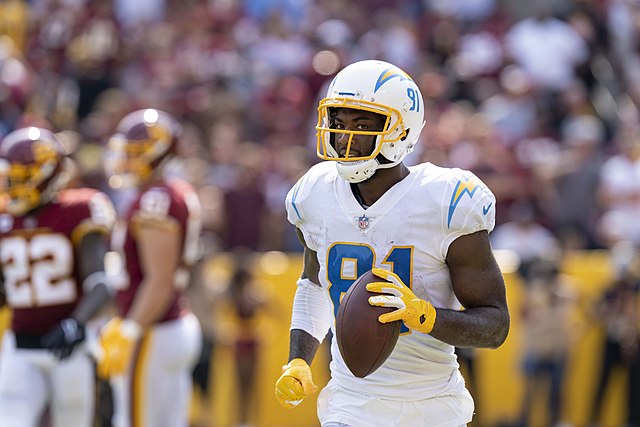 What is Williams’s dynasty outlook in 2022 and beyond?

2021 was a breakout season for Mike Williams, but what does 2022 and beyond look like? Let’s walk through his situation and what his outlook is, starting by reliving last year. Williams finished as a top 12 fantasy WR in 2021 in half PPR scoring. It was a little Jekyll and Hyde situation though, as Williams was the WR3 going into the Chargers week 7 bye, and just WR29 afterwards. Which is the real one?

Let’s start with Williams’ contract status. Scheduled to become a free agent this past offseason, he chose to return to the Chargers on a new 3-year, $60M contract. The deal guarantees the receiver a cool $40M over the first two years, and he’ll likely either be extended or cut before year three.

That’s fantastic news for Williams’ outlook, as he’s locked into the top role on an offense with an elite young QB and an aggressive analytical head coach. Assuming Williams can stay healthy, there’s no reason to expect much to change from last season. Expect some volatility, but massive weekly upside, which is par for the course with most top WRs.

Williams saw a huge swing in utilization from 2020 to 2021. Going into last season, he was primarily viewed as a deep threat and red zone guy. A new OC, Joe Lombardi, came from New Orleans and put his into the X WR role that some guy named Michael Thomas thrived in for years. As a result, his average depth of target dropped dramatically and 39 more targets than his previous high.

I don’t have a true explanation for what happened as the season went along, but even after “struggling” down the stretch last year, everything from the tweet above has me excited for the future. Plus, Williams is nearly three years younger than teammate and target hog Keenan Allen. As Allen plays over 30 years old, his production will decline and Justin Herbert will rely on Williams more.

Here’s the best explanation out there. A late game injury led to a down 5-week stretch with several poor finishes. Once the injury started feeling better, he bounced back to WR18 over the final eight games. While not utilized at the same high level as early in the year, he was still a top-end WR2. It’ll be fun to see how he continues in 2022.

Now that we’ve covered the background, what does this mean for the present and future? Williams has a wide weekly range of outcomes but is tied into an elite offense and a big-time role in it. That is exactly the type of WR2 you should want on your rosters. Throw in an aging Keenan Allen and it only makes me more excited for the next few years with Mike Williams.

In 2022 and going forward, not only did Williams come back, but the other teams loaded up in their division. Expect shootouts, and with an aggressive head coach, a lot of touchdowns. He’s due for a bump in targets and is a near lock for double-digit touchdowns the next few seasons. With the addition of JC Jackson from New England, he’s been practicing against elite coverage and getting better.

I wouldn’t be surprised to see 140 or so targets to Williams for the next few years, 80-85 catches, 1200-1300 yards, and 8-12 touchdowns. That rough projection would equate to the WR8 or so last season. A WR1 if needed, but I’d rather him as my second guy. I love him going forward, and will definitely try to get him after writing this.

Unless in a multi-year rebuild, I’m not looking to trade away Williams. I would try to acquire him though, especially as a contender. KTC has Williams as WR31, behind Jerry Jeudy and George Pickens. Jeudy has yet to finish above WR44 on a year, and Pickens hasn’t played a regular season game. As a contender, give me Williams all day and enjoy taking down a title in your dynasty league this year.