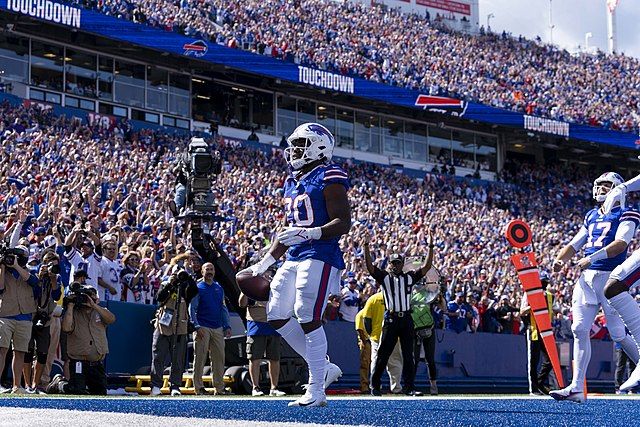 Football is back & Scott Hanson is also back! Week 1 of the 2022 NFL season kicks off with the reigning Super Bowl Champions (Los Angeles Rams) squaring off against the 2022 Super Bowl favorite (Buffalo Bills) tonight!

There are also other intriguing match-ups on the plate this weekend —- such as the Tampa Bay Buccaneers vs the Dallas Cowboys, the Green Bay Packers at the Minnesota Vikings, and the Las Vegas Raiders at the Los Angeles Chargers. Well, I’m going to take an exotic angle by delivering five bold predictions for Week 1.

I picked the Chargers to win the frigid AFC West this season and I believe they will make an unusually positive early impression by blowing out the Las Vegas Raiders on Sunday. I expect Justin Herbert (5,014 passing yards and 38 passing touchdowns in 2021) to be a potent MVP candidate & the Chargers defense to be a cream-of-the-crop unit with Khalil Mack and J.C. Jackson leading the charge.

The Saints were seen as a mediocre NFC team by countless analysts in February. Over the past couple of weeks, Peter King pegged the Saints to be the first seed in the NFC and Bart Scott believes Jameis Winston will win MVP. With that said, I expect Winston to blow the roof off the Falcons in their first battle. He has a Top-5 WR trio (Michael Thomas, Jarvis Landry, and Chris Olave) and he’s facing a medicore Atlanta Falcons defense.

The Carolina Panthers may be the third-best team in the NFC South, but they could sneak into the playoff dance with a healthy Christian McCaffrey and a hungry Baker Mayfield. Mayfield and “Reunion” by Bon Jovi are lacing up their cleats for a fight against the Deshaun Watson-less Cleveland Browns this weekend. I simply believe an extremely blood-thirsty QB-RB tandem on the Panthers will lead them to mop the floor against the Browns.

Joe Flacco will also have a taste of revenge this weekend – as he faces the superb and somewhat confusing Baltimore Ravens. It doesn’t appear that Lamar Jackson’s mind is completely devoted to the Ravens. Furthermore, I expect the Jets to have a ton of energy at home, and with new offensive toys (Breece Hall and Garrett Wilson). I foresee the Jets losing against the Ravens, but I wouldn’t be shocked if they only lose by a field goal (yes, it makes a (slight) difference).

The Jaguars possess a maniac with a lot of upside in Trevor Lawrence. T-Lawrence was gifted Evan Engram, a healthy Travis Etienne, and Zay Jones in the 2022 off-season. I really expect the former Clemson unearthly signal-caller to hit the ground running against the less-than-talented Washington Commanders in Week 1 by unveiling 5+ touchdown passes!