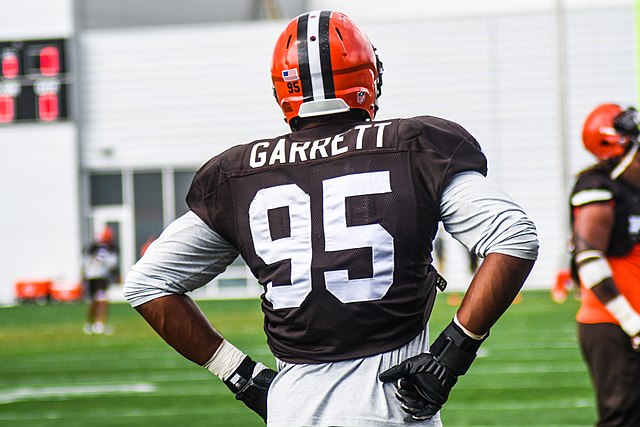 Who has the best pass rushing duo?

The NFL has countless bloodthirsty quarterback hunters in the year 2022. The ultimate question is: which team has the best pass-rushing duo? Well, I’m going to go under the microscope and rank the Top 5 pass rushing duos. Let’s begin.

It may seem like the New Orleans Saints are a bandwagon team at this point. Yet, I still feel sincere, deep love for the Saints edge rushing duo (Cameron Jordan and Marcus Davenport). The Saints edge rusher from UTSA (Davenport) is arguably the Saints best defender when healthy. Davenport had a monster 88.8 grade by PFF a season ago. I trust that he will take another step forward and play through potential minor injuries to have an unearthly output in his contract season. Of course, Cameron Jordan will prey on opposing signal-callers across from Davenport. Jordan (who is coming off his fifth-straight Pro Bowl) had 12.5 sacks, 22 QB hits, and 13 tackles for loss in 2022. Per CBS Sports, Jordan also has the second-most pressures (behind Aaron Donald) in the league over the past five seasons.

The former Defensive Player of The Year Khalil Mack was on pace for one of his finer seasons in 2021 until he had to undergo foot surgery – which put the last season for him in a coffin. Mack had six sacks, seven QB hits, and six TFLs in seven games. The former Buffalo defender will also be playing with a Chargers secondary that is superior to the cornerbacks and safeties that Mack played with in Chi-town. Mack’s pass-rushing pal, Joey Bosa, will also look to cause headaches for opposing QBs. Bosa, aka the DROY winner in 2016, is coming off his fourth Pro Bowl nod in six seasons. I simply can’t wait to see opposing offenses struggle to account for both Prometheus-like edge rushers.

Aaron Donald will mop the floor against his opponents at any spot on the DL. AD nicely picked up a sack and had an 81.7 grade for his performance last night against the Buffalo Bills. The John Wick-like DT somehow made first-team All-Pro in each from 2015 to 2021. Leonard Floyd will seek to bring nightmares to opponents alongside Donald, too. Floyd has honestly been consistent for the Rams over the past two seasons (10.5 sacks and 19 QB hits in 2020, 9.5 sacks and 18 QB hits in 2021).

The Hulk-like edge rusher and last defensive player not named Aaron Donald to win DPOY, T.J. Watt, was unstoppable last season. The younger Watt brother unleashed 22.5 sacks – which tied Michael Strahan’s record. He also had an 89.5 grade by PFF a season ago, which was quite impressive. His pass-rushing mate, DT/DE Cameron Heyward, has been like fine-wine as he continues to get better with age. Heyward had 11 sacks a season ago. Furthermore, he’s also had four seasons of at least 8+ sacks over the past five seasons in his career.

The Browns DE Myles Garrett is undoubtedly a game wrecker —- coming off his second first-team All-Pro season. PFF handed Garrett an unusually impressive 92.0 grade, too. Despite his incident with the helmet, Garrett has found a way to be a consistent force on the field & inspiring person off the field. The other former first overall pick on the Browns DL, Jadeveon Clowney, resurrected his career in 2021. Clowney had nine sacks, 19 QB hits, 11 tackles for loss, and two forced fumbles. It should still be noted that the former Houston Texan has had three or fewer sacks in two of his past three seasons.

The Dallas Cowboys have a mythical, young LB in Micah Parsons. The former Penn State LB can dismantle opponents’ passing plans at ease – which is evident from his 13 sacks and freaky 30 QB hits as a rookie. Parsons has been dubbed as the next Lawrence Taylor by countless NFL fans (especially from Dallas area). Demarcus Lawrence, also known as Tank Lawrence, has been quite good at stomping QBs for a long time. Lawrence showed how important he was when healthy with a pick-six a season ago.

Tom Hardy Mad Maxx Crosby was a wrecking ball last season – as he obtained second-team All-Pro honors. Crosby notched a potent 30 QB hits and eight sacks for the Raiders. He was given a new (toy) friend this off-season in Chandler Jones. The former AZ Cardinal registered 10.5 sacks, 26 QB hits, 41 combined tackles, 12 TFLs, in 15 contests last season. The Chargers may have an ultra-superior pass-rushing tandem, but don’t lose sight of the Raiders hungry pass-rushing tandem.

The ageless Von Miller started the 2022 season on a high note by unleashing a pair of sacks against the reigning Super Bowl Champions/his former team. It’s clear that Miller has been breathing fire over the prior 10 contests. He may very well win a third Super Bowl ring with a different team. His teammate, Gregory Rousseau, should have a breakout season in 2022. The Bills 2021 first-round pick had a sack against the Rams, too. The Bills possess the right combination of experience and youth in Miller and Rousseau.

The first player to sack an opposing QB with the same name belongs to none other than the Jacksonville Jaguars Josh Allen. Allen quietly had 10.5 sacks and 23 QB hits as a rookie —- then nicely unveiled a modest 7.5 sacks and 14 QB hits last season. He will anticipate help from the 2022 first overall pick Travon Walker. The former Georgia pass rusher stole the show this summer and in pre-season. I undoubtedly expect the sky to be the limit for the most underrated pass-rushing duo in the league.