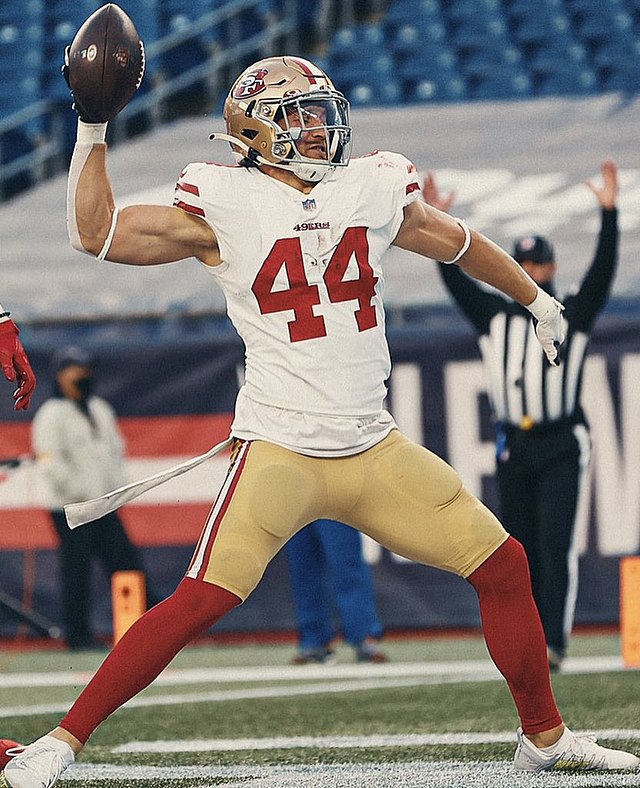 The offensive wiz Kyle Shanahan handed the keys of the offense to Trey Lance this season & he will certainly anticipate magic from the former North Dakota State signal-caller. Lance has only thrown for 603 passing yards and 5 touchdowns (to two interceptions) in his career. Nonetheless, the dual-threat QB that is seen as the chosen one by 49ers fans has made a ton of growth this off-season. He flexed his arm talent in the preseason opener by converting four of five passes and even completing a 76-yard touchdown to Danny Gray (as shown below)!

Besides Gray mopping the floor against opponents, the 49ers still arguably display a Top-3 WR-TE tandem in the league with Deebo Samuel and George Kittle. Samuel is coming off a season with 1,405 receiving yards, 365 rushing yards, and of course: first-team All-Pro honors. Meanwhile, the Thor-like 49ers TE unveiled 910 receiving yards and six touchdowns in 14 contests a season ago. PFF gave Kittle a very impressive 90.9 grade for his performance.

At the RB spot – I really, really like Elijah Mitchell. I slotted Mitchell as a Top-10 RB entering 2022 after he unleashed 963 rushing yards and five touchdowns in 11 contests a season ago. He will certainly mow down opponents behind the Trent Williams-led OL. Williams picked up his first first-team All-Pro nod in 2021.

The two x-factors in the 49ers offense are unequivocally Brandon Aiyuk and Kyle Juszczyk. The 49ers WR2 didn’t exactly transcend into a 1,000+ yard WR last season, but he should really evolve into a Pro Bowl wideout with a big-arm, young QB in Lance. The 49ers FB from Stanford is the jack-of-all-trade for Shanny & he made his sixth straight Pro Bowl last season. Yes, you read that correctly.

Assuming the 49ers don’t have a walking dead-like squad, which occurred in 2020, I foresee the scrappy NFC West squad being a Top-3 rushing offense and a Top-15 passing attack. It would be difficult to deny that the 49ers boast the right combination of youth and experience on offense. I expect Lance to have growing pains, but he should be able to have more high-end performances than Jimmy G – to say the least. It’s unclear if Lance will be overly efficient or clutch, but I believe the QB that holds high expectations for himself will steer his offense to be quite successful moving forward.