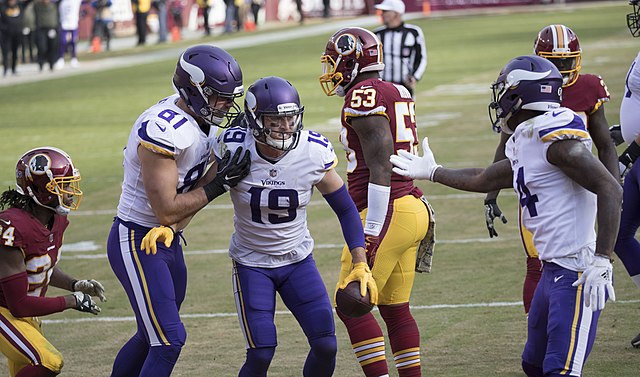 Will Thielen be cast into Canton?

The talented, utterly scrappy Adam Thielen has been amazing since entering the league as an undrafted free agent in 2014. The former Minnesota State wideout unleashed an incredible 113 receptions, 1,373 receiving yards, and nine touchdowns in 2018. Furthermore, Thielen has been like fine wine in the late stage of his career by obtaining 14 touchdowns at the age of 30. A year later, he ousted 10 touchdowns in 13 contests. He will still aim to be a threat across the extremely authentic WR Justin Jefferson this season.

With that enunciated, there has been a fascinating, pivotal question surrounding the Viks WR: Is Thielen a future Hall of Famer?

Thielen has a story that may be as inspiring as Brandon Burlsworth (please watch the film “Greater”) while being a dominant player for many seasons in his career. It’s also undeniable that he’s a Vikings legend.

I don’t believe Thielen is on a path to making it into Canton. He has only punched two tickets to the Pro Bowl (although, he questionably failed to garner PB honors in two seasons with 10+ touchdowns). He hasn’t garnered any All-Pro nods in his journey & he hasn’t been overly lethal over a long span. In addition, Thielen hasn’t won a pivotal SB ring.

If Thielen can have a few more Pro Bowl nods & a Super Bowl ring, he deserves to be cast into football heaven. So, it’s clear that the Vikings WR1 needs a lot more success to garner a gold jacket. Everybody loves Thielen, but it won’t be easy for him to get a key to the Hall of Fame.