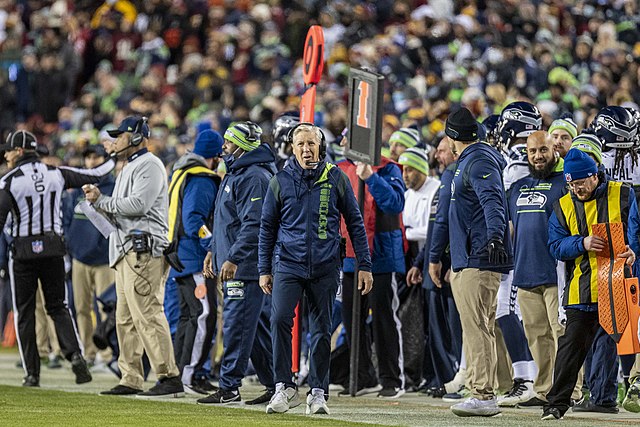 Pete Carroll vs Kyle Shanahan: who will win tomorrow?

The Seattle Seahawks slayed their Goliath-like foe in the Denver Broncos last week. The Hawks will square off against their archnemesis in the San Francisco 49ers tomorrow. Well, I’ll take a fun, critical angle by untwining whether Pete Carroll or Kyle Shanahan is the more dangerous ring leader in the showdown tomorrow.

Besides being a dominant face in the league for a long-time, Carroll is coming off a victory that really showcased his insane level of grit and preparation. The Bobby Wagner-less defense in the rainy city limited the Broncos offense to 16 points (which included a mere one TD from Russell Wilson).

The 71-year-old HC for the Hawks will face off against Kyle Shanahan, also known as Shanny, for the 12th occasion tomorrow.

Shanny has been a methodical genius for SF over the past five seasons, to say the least. George Kittle & Deebo Samuel have risen to become All-Pro profiles under the 49ers HC. Although, it’s unclear if Shanny can ignite Trey Lance to have a performance similar to the 2016 MVP season by Matt Ryan. Lance was undoubtedly one of the biggest duds last week: 164 passing yards, 0 passing touchdowns, 46.6 completion percentage, 1 interception, and 54 rushing yards.

I actually love Carroll’s success from his defensive unit that wasn’t led by Bobby Wagner and didn’t have Jamal Adams for nearly three quarters in the contest yesterday. The Hawks were able to bottle up their old friend, Russell Wilson, and they should be able to contain the dual-threat signal-caller for SF. Shanny has swag and talent on his roster, but I believe the experienced face in Seattle deserves more props than Shanny right now.