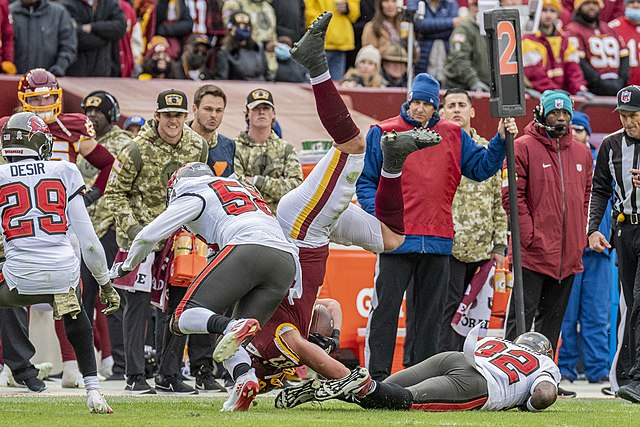 The Buccaneers pass rush feasted on Jameis Winston in Week 2

The Tampa Bay Buccaneers weren’t ruled with an iron fist by Tom Brady in their victory against the New Orleans Saints in Week 2. The Bucs pass rush was the key reason why they defeated their old pal, Jameis Winston, and a Saints team that had a 4-0 record against TB12 in a Buccaneers uniform in the regular season. The Bucs were able to register an unearhtly six sacks against the Saints QB Jameis Winston.

The Buccaneers pass rush was led by none other than Shaquil Barrett in Week 2. Shaq Attack, who once had 19.5 sacks in a single season, had two sacks against Winston. Devin White, Vita Vea, Joe Tryon, Lavonte David, and Antoine Winfield also contributed sacks on the former Bucs QB.

It’s important to note that the Bucs pass rush was the second biggest reason why they were able to win Super Bowl LV. In their mighty show-down against Patrick Mahomes, the Bucs were able to unleash three sacks & an incredible nine QB hits on Patrick Mahomes. They have a slightly different front seven from their Super Bowl-winning squad — as they moved on from Ndamukong Suh and brought in Akiem Hicks.

Of course, Todd Bowles will anticipate magic and a potential MVP season from Brady, but the Bucs absolutely need their front seven to unleash hell against opposing QBs if they want to win another Lombardi trophy with the GOAT. Hopefully, they can also have a healthy Akiem Hicks (who didn’t return against the Saints) back in the line-up soon.