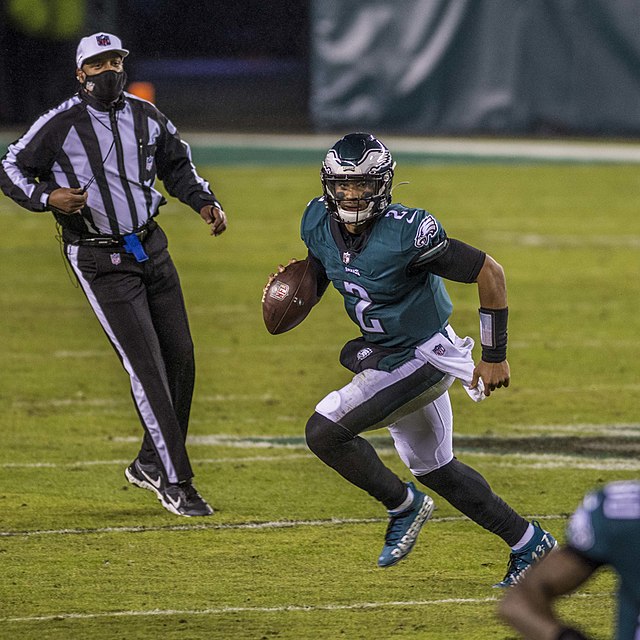 Does Jalen Hurts or Tua Tagovailoa have a higher ceiling?

The NFL showcases a breathtaking group of signal-callers in Patrick Mahomes, Aaron Rodgers, Tom Brady, and Josh Allen. It’s hard to ignore the annual faces of Sunday Night Football that regularly deserve MVP praises. There are also other QB faces that could dazzle and somewhat surprisingly win an MVP ring or Super Bowl title — such as Justin Herbert, Lamar Jackson, Matthew Stafford, and Joe Burrow. Yet, let’s not forget about a couple of gifted dual-threat signal-callers in Jalen Hurts and Tua Tagovailoa, who are really darkhorse MVP candidates, and could honestly lead their team to secure a Lombardi trophy in the future.

With that said, I’m going to untwine the outlook for each Generation Z QB and conclude which signal-caller has the higher ceiling.

The former Alabama Championship winner is off to an incredible 2-0 start. He has only thrown one touchdown to one interception, but he already has three rushing touchdowns on the season. Furthermore, the Eagles QB possesses an impressive completion percentage of 69.8% (eighth in the league). In his first two contests combined, Hurts has thrown 576 passing yards (seventh in passing yards). It’s clear that the arrival of A.J. Brown has been helpful — as Brown ousted a whopping 155 yards in Week 1 against the Detroit Lions.

The 24-year-old signal-caller is coming off a 2021 season where he owned an 8-7 record, unveiled 3,144 passing yds, and unveiled 16 passing TDs to 9 ints. Of course, he ran angry for 10 rushing TDs and 784 yds, as well. Unfortunately, the Hurts-led squad was defeated by the Brady bunch in the 2021 wild-card round. Hurts was also swept by the Boys last season — which was undoubtedly frustrating for Eagles fans.

Moving forward, Hurts has one of the top WR duos in the league (Brown and Devonta Smith), an unbreakable TE named Dallas Goedert (830 yds and 56 receptions in 15 games last season), and an offensive line unit that was ranked the best OL in the league by PFF this off-season.

It seemed like Philly had a cake-walk schedule, but it can’t be understated that the Giants defense has been shockingly lethal & the Dallas Cowboys defense is a bit more talented than expected with the very early 2022 DROY favorite Micah Parsons.

Tua Tagovailoa, also known as the AFC player of the week (against a mythical Baltimore Ravens pass defense) in Week 2, has registered seven passing touchdowns to two interceptions in two match-ups thus far. The Phins QB has also ousted an impressive 71.1% completion percentage and a whopping 739 passing yards in 2022. It’s obvious that the hiring of Mike McDaniel and the signing of Tyreek Hill have dramatically improved Tua’s potential.

In particular, I really love the brains and persona of McDaniel. Andrew Hawkins did a fantastic job of describing the eccentric Dolphins HC and his ability to innovate football strategies on the Rich Eisman show (as shown below).

It’s exciting that Tagovailoa and McDaniel, who may be the Nikola Tesla of football coaches, are both an ascending, young duo. Jaylen Waddle is still a sophomore and let’s not forget that Hill will also be under contract with his squad until the 2027 off-season. Hill (284 yds and 2 TDs) and Jaylen Waddle (240 yds and 3 TDs) will undoubtedly be a Top-3 WR duo for many seasons to come.

Hurts may have slightly more success than Tagovailoa in their young journies, but I honestly like the direction of the Phins QB more than the Eagles signal-caller. They both may have Pro Bowl-caliber seasons, yet struggle to make a deep playoff run in 2022 or 2023. However, I strongly feel they can both (at least) have a Russell Wilson-like career.

The Eagles QB had eight games where he threw under 200 passing yards last season, while Tagovailoa had four games thrown under 200 passing yds last season. I like Tua’s floor as a passing QB more, but it should be noted that Hurts can hurt defenses with his legs as he just ran for 2 TDs against the Vikings in Week 2. I do believe that it’s quite scary that Hurts can be lethal with his explosive rushing ability, stay efficient, and rack up the stats through the air with Brown & Smith.

However, I still feel there’s a magical feeling with the Phins shiny passing attack, particularly because they embarrassed a very talented pass defense (Baltimore Ravens) in Week 2. Hence, I believe Tua deserves a higher rank and jaw-dropping expectations than the Eagles QB at this moment.

Tagovailoa will surely not sustain his Week 2 magic, but they should be able to mop the floor against a few more pedestrian foes. I blatantly love the overachieving Phins QB, his Da Vinci-like HC, and his flash-like WR duo moving forward.