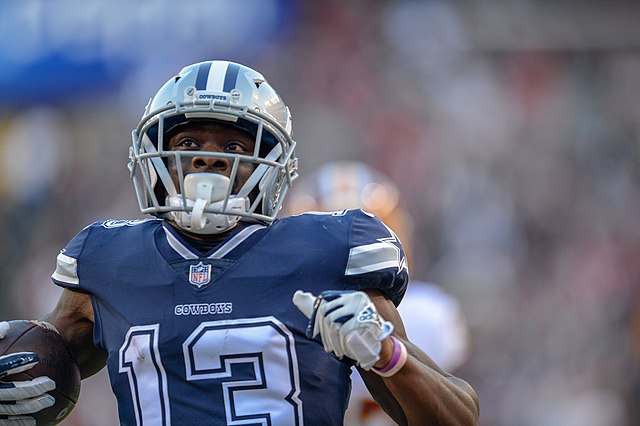 Dynasty leagues can be won and lost through savvy maneuvering at the flex spots. As a competitive team, boring vets can be highly valuable flex options that won’t break the bank. In a rebuild, trading those guys to chase upside while bottoming out for a high pick is a smart choice. So who are some players to target for flex options in a dynasty league?

Starting the column off with an injured WR is not ideal, but this is how I’m hunting value. Michael Gallup is getting closer and closer to making his 2022 debut off the torn ACL that ended his 2021. Just in time for a Cowboys offense in desperate need of playmakers. CeeDee Lamb has yet to truly take over as an alpha, and the next highest valued player is a rookie who hasn’t been dressed for a game yet.

Gallup struggled as a young player in the top role, but I’m interested in him now with a veteran QB and Lamb there. After that struggle from Gallup, the Cowboys added Amari Cooper. Cooper finished his three full years in Dallas as WR10, WR15, and WR27. The last two were with both Gallup and Lamb as teammates. With Lamb playing his same slot role, Gallup has upside to grow into the Cooper role and be a top 20 guy.

Who are some other solid flex options at WR that I’d target? Jakobi Meyers just continues to beat anyone in his way in Foxboro and will put up numbers. Allen Lazard is the de facto alpha in Green Bay, and showed to end 2021 what that means by being top 20 WR over the final 5 weeks. Curtis Samuel is healthy again and being used similarly to 2020 when he finished top 25 at WR.

If targeting flex play RBs, Rhamondre Stevenson is just a prototype of the player I’m after, but he’s a smart buy. Starter Damien Harris is still the top guy in Foxboro, but he’s a free agent at the end of the year. The Patriots don’t pay for past performance, and spent picks on two rookie RBs in the 2022 NFL draft. I don’t see Harris back, which means Stevenson ascends into the role.

Additionally, Stevenson has a solid playable role this season. He is not likely to be consistent but can give you a multiple TD week any given week and has a top 15 or higher upside should Harris go down. As for 2023, it’s likely to be wheels up on his stock and will be viewed as a top 20 guy. While the WRs and TEs I’m selling as a contender, these RB types need to be held until they hit that higher level then sold off.

Who are similar RBs I’d target with similar long-term upside? Tony Pollard in Dallas, while he’s a free agent at season’s end, I love what he’s shown on the field and Ezekiel Elliot could be cut this offseason. Brian Robinson hasn’t played yet, so the unknown in Washington presents upside to push Antonio Gibson out the door for good. Rachaad White is Stevenson just one year earlier, as Fournette is likely there until the 2024 offseason. Khalil Herbert is Stevenson but with a lesser 2022 role and potentially returning starter ahead of him next year.

I’ll be honest, I missed on Tyler Higbee for 2022. I wasn’t interested and thought he’d be at best the 3rd option in a balanced offense with an injured QB. Through two weeks though, the running game is a mess and Higbee is the second option in LA. If he continues to hold off Allen Robinson, he’ll be a viable flex for rosters, especially in any TE premium (TEP) leagues.

Even for cheap DFS, he’s labeled as gross despite leading the position in targets. He is only still as cheap as he is because of the lack of TDs, which is not a sticky stat. In his two games, he’s seen three red zone targets, which is second at TE. If the usage remains he’s a likely top six TE this year, which plays in your flex even non-TEP leagues.

Who are some other solid flex options at TE that I’d target? Gerald Everett for the Chargers has been busy at TE as well, and is tied to Justin Herbert for 2023 as well. Tyler Conklin is running a nearly full-time role for a Jets team playing a ton on offense, which is a good indicator that the stats could follow. Deepest cut option is Juwan Johnson in New Orleans, who’s a TE on multiple platforms and has taken the top TE option from Adam Trautman and can put up a few points with TD upside.

This is where we’ll speculate on some guys who are still unknown and have potentially fruitful roles in late 2022 and beyond. Sterling Shepard is currently the top option for the Giants, after taking a pay cut to return from an injury in 2021. Enter rookie Wan’Dale Robinson, the only WR the Giants regime has much invested in having taken him early in round 2 of the 2022 draft.

Rookie in an offense without a true alpha target hog and a coach who’s willing to showcase talented players? Sign me up for that. Add in the injury discount that he likely carries, and I’m buying regardless of contender or rebuilding, offering a healthy middling flex type like discussed above even, if I need the upside shot. He played RB and WR in college and might see some Deebo Samuel-type role.

Who are some other upside young flex options at WR that I’d target? Skyy Moore tops the list, tied to the best QB in football, and no pass catchers standing out there yet. Tyquan Thornton is nearly a copy-paste of Robinson’s write-up, but Meyers is better than Shepard. Romeo Doubs blew up camp but has stumbled through two weeks, but expect a breakout soon. Rondale Moore isn’t a rookie but Greg Dortch is playing his role and is a playable flex with less athleticism.

Who I target depends on the situation. With a rebuild I’m after the RBs or younger WRs, as a competitive team with strong starters I might chase cheaper options at WR or TE. Obviously, know where you’re weaker and stronger and add to those weaknesses to make a more well-rounded roster. I gave lots of options, and while I like the main person in each group best, I’m not overpaying for them over others I discussed, so do some shopping and know the easier managers to deal with! Best of luck!