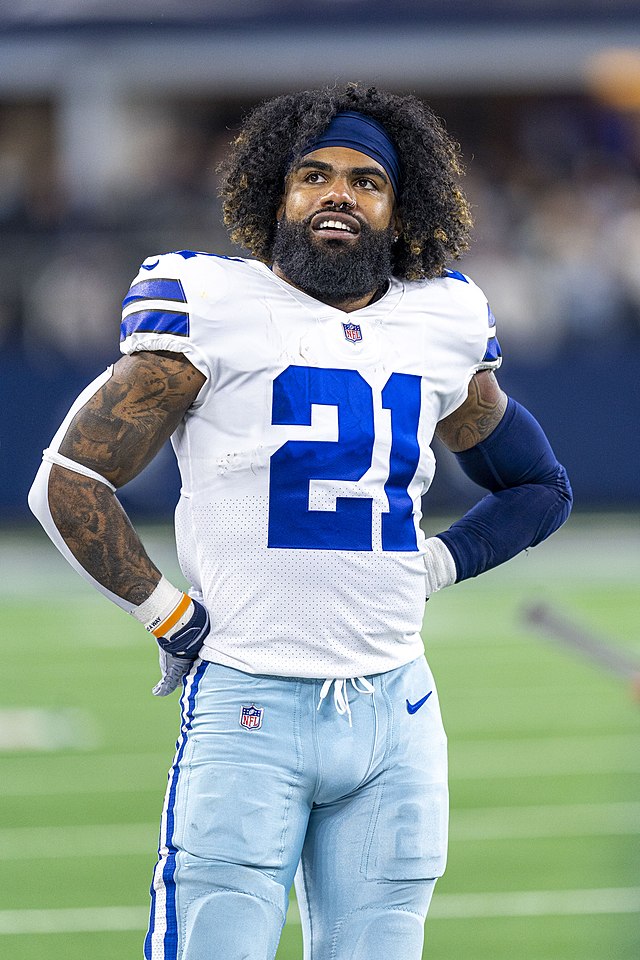 Will Elliot be cast into Canton?

Coming into this article idea, frankly, I thought there was absolutely no viable way Ezekiel Elliott is remotely a Hall of Fame caliber player, as many of you may be thinking at this moment.  After delving into some more research on the topic, I am not 100% convinced he will make it, but frankly, there are a few players who compare exceptionally well to Zeke who made the Hall of Fame.  In this article, I will be comparing him to two Hall of Fame players who had relatively similar careers to this point in time, as well as gauging his legacy on the sport to determine if he is someone who should be considered for enshrinement.

The first thing I did when researching for this article is looked at every current Hall of Fame running back who was enshrined and taking into account their statistical success in comparison to Zeke.  As surprising as this may be, Zeke not only compares exceptionally well to one of these players but also seemingly surpasses another in many metrics across the board.

The first player he compares well to is Hall of Fame Cleveland Browns running back Leroy Kelly, who played from 1964-1973. In his 10-season career, he had 7,274 rushing yards (217 less than Zeke as of the writing of this on 9/24), 74 touchdowns (18 more than Zeke), 4.2 yards per carry (0.3 less than Zeke average), 2,281 receiving yards (44 more than Zeke), and 13 receiving touchdowns (1 more than Zeke).  They compare almost identically except for rushing touchdowns, which Zeke would likely surpass in 3 more seasons if he is to play that much longer.  For those saying that seasons were shorter in this era, while that is true, Leroy played in 46 more games (20 more starts) over the course of his career, and rushed 52 more attempts in his career.  While they are relatively far apart in games played and started, the rushing attempts are very close as of right now, which shows efficiency per run as well as how productive Zeke has been in his 90 games to date.  Kelly did have 3 more pro-bowl appearances than Elliott, as well as 2 more first-team all-pro appearances.

The other player worth mentioning in this topic would be Hall of Fame Denver Broncos Running back Floyd Little, who played from 1967-1975.  During this span of 9 seasons, he would play 117 games (27 more than Zeke), start in 105 (15 more than Zeke), have 1,641 rushing attempts (34 more than Zeke), had 6,323 rushing yards (1,168 less than Zeke), 43 rushing touchdowns (13 less than Zeke), 3.9 yards per carry (0.6 less per carry), 2,418 receiving yards (181 more than Zeke), and 9 receiving touchdowns (3 less than Zeke).  Floyd had 2 more pro-bowl appearances in his career than Elliott, and the same amount of first-team all-pro team appearances.  Ezekiel has the upper hand in nearly every major statistic compared to Little aside from receiving yards, which he could surpass this or next season.  Both of these players did play in an era where defense was significantly more dominant though however, which is worth noting, however backs were utilized at a higher level as well so it evens out to an extent.

Does Zeke deserve to be in the HOF?

The answer for now, despite all this, is no.  While Elliott has performed at the level of other HOF backs so far, he needs to play out at least 3 more seasons and have a pretty decent level of production.  The main reason is legacy, a Super Bowl would go a long way for his resume, or a few more pro-bowl appearances.  Statistics do not carry all of the weight in the world, legacy takes about half of the weight for Hall of Fame inductions.  Zeke does not have a ton of legacy under his belt aside from a phenomenal rookie year.

I would say breaking into the top 30-35 backs in terms of rushing yards would put him on a good track, which would be Marshawn Lynch (30th all-time – 10,413 rushing yards).  To put that into perspective, that is 2,922 yards, or almost 1,000 a season if he only plays 3 more years.  Is this attainable?  Absolutely.  Breaking the 10,000 yards mark, getting his touchdown numbers up a bit more, and continuing on the track to at least some deep playoff appearances would put him in HOF talks.  For now, he is a good quality player, but if he retired today, he would not be inducted.