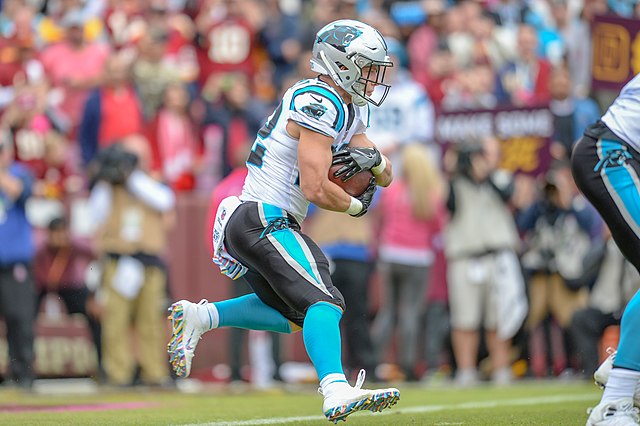 The Carolina Panthers unsurprisingly cut ties with Matt Rhule, who was sadly only dealt the loose cannon QB, Baker Mayfield, this past off-season. It’s clear that Rhule is having a bad day (by Daniel Powter) & that the Panthers could opt to rebuild their roster at this early point of the season. The well-reputable RB Christian McCaffrey is one of the Panthers figures that could be shipped away soon. Hence, I’m going to untwine attractive trade destinations for CMAC.

I don’t believe that the Bills have been on the phone to acquire CMAC yet, but it would still be sexy for the Billa Mafia to still bring in the all-purpose threat. Similar to the Los Angeles Rams last season, the Bills should be pedaled to the metal to win the Super Bowl this season. James Cook (the brother to Dalvin Cook) has had great flashes, but he hasn’t been overly impressive this season (17 carries, 89 rushing yds, four catches for 37 receiving yards, and 1 rushing TD).

Let’s be honest — the Bills GM Brandon Beane may be more tempted to acquire a shiny face after losing to his archnemesis, the Miami Dolphins.

After starting 3-2 (including victories against the Cleveland Browns, the Pittsburgh Steelers, and the Miami Dolphins), the New York Jets are arguably the most surprising team in 2022. The Jets should make an exotic move by bringing in an elite toy for Zach Wilson. Furthermore, the Jets also have the 10th most cap space in the league (which isn’t too shabby). The second-year HC Robert Saleh may need to acknowledge that he’s competing in one of the most frigid NFL divisions with his second-year QB and that he may need to pull the trigger on acquiring a freak talent to put his team over the top.

The Philadelphia Eagles would certainly have an unstoppable QB-RB duo with Jalen Hurts & Christian McCaffrey for many years to come. The Eagles are sitting gloriously at 5-0, which also means they’re the last undefeated squad in the league. It’s clear that their aggression to acquire the speed-demon WR A.J. Brown was worth it. Perhaps Howie Roseman can find more dopamine and acquire the mighty McCaffrey. It’s vital to note that the Philadelphia Eagles are second in cap space, too.

The 2-3 Denver Broncos are in dire need of a spark. The Super Bowl XLVII champion Russell Wilson is clearly on life support, as he’s merely unveiled four passing touchdowns to three interceptions this season. It’s impossible to not mention that the Broncos also square off (and are slipping) in the brutal AFC West division. The Los Angeles Chargers and Kansas City Chiefs should absolutely be Super Bowl contenders in each of the next few seasons, so the Broncos need to make a creative solution to fix their offense immediately.

The Green Bay Packers are reluctant to trade for a WR, but that doesn’t mean they can’t reel in a shiny RB. Burning man Aaron Rodgers is on his last legs, so the Pack should make an aggressive move to trade for a star or sign a FA WR (such as Will Fuller or OBJ). Aaron Jones is a quality RB, but he isn’t a future Hall of Famer. They could seek to make a trade that pushes Jones out the door for McCaffrey in return. Contrary to the past, I don’t feel the most confidence in the Packers finishing as a top-5 NFC team this season. I’d love to see them make an uncharacteristic, bold move to help A-Rod soon.

The Houston Texans can still escape their hole in the near future. The Texans have a steal in their 2022 fourth-round pick Dameon Pierce (412 rushing yds, 4.8 YPC, and 3 rushing TDs), but they could still benefit from an extremely gifted profile on their offense. The Texans could aspire to acquire CMAC, draft C.J. Stroud in 2023, and then continue to witness magic from Pierce and WR Brandin Cooks. The Texans aren’t in rainbow land with their 1-3-1 record, but they can make some noise with another stud & more growth from Davis Mills in 2022.

The Detroit Lions rank third in PPG, so why shouldn’t they add more fireworks to their offense? I already love the faces in the Lions WR room (Amon-Ra St. Brown, DJ Chark, and Jameson Williams), TE T.J. Hockenson, and the energy from RB D’Andre Swift. The Lions have a high-powered offense led by the underrated Jared Goff at QB, but it hasn’t been enough to oust victories (as they sit at 1-4). The team owned by Sheila Ford Hamp should roll the dice in their division that features three squads standing in front of them.

The Bengals have an abysmal OL, but that doesn’t give an entire excuse for Joe Mixon’s 2022 performance thus far (96 carries, 302 rushing yards, 3.1 YPC, and 1 rushing touchdown). Who Dey Nation and the fantasy owners of Mixon have wanted him to walk the line for quite some time now. The 2-3 Bengals need to remember their stripes & the fact that they were AFC Champions a season ago. I’d be ecstatic if the Bengals brought in McCaffrey to their offense with Ja’Marr Chase and Joe Burrow. They could aim to push Mixon out the door with another player or pick for McCaffrey.

Bill Belichick still reigns in the gritty AFC East division — which means his squad can surprise any given Sunday. The Pats, who may have a QB controversy between Bailey Zappe and Mac Jones, could take another step forward with an unguardable weapon. Devante Parker had an unbelievable outing against the Baltimore Ravens by hauling in 156 yards and two touchdowns. It could be time for BB to add another veteran playmaker for his team which is currently (but, perhaps not for long) last in the AFC East.