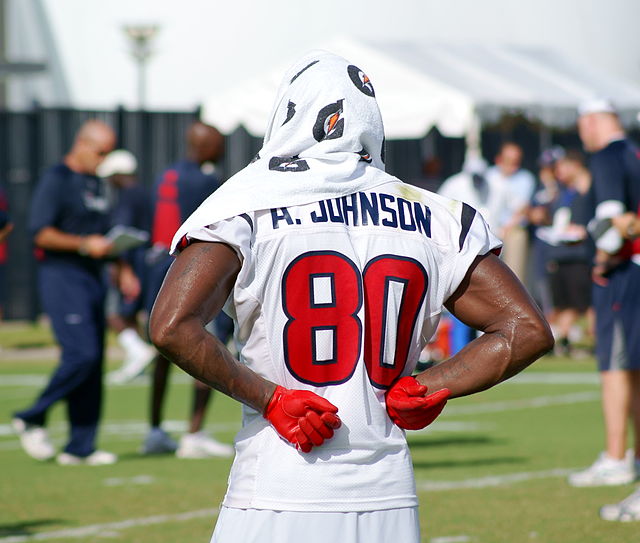 Will Andre Johnson be cast into Canton?

The NFL Hall of Fame is the golden standard for legendary players, with many fans and analysts using it as the bare minimum to be considered one of the best at your position.  Some of the best receivers ever have made the list, Jerry Rice, Randy Moss, Terrell Owens, Marvin Harrison, and many others are included on that list.  In this article, I will cover whether or not Andre Johnson should make the NFL Hall of Fame, and why he should or should not.

One of the most notable reasons Johnson is considered in the Hall of Fame discussion is his receiving yards total, where he sits 10th all time, behind only two non-Hall of Fame receivers in Larry Fitzgerald (not eligible yet) and Steve Smith Sr. (eligible in 2022, was not selected yet).  Johnson also ranks 9th all-time in receptions with 106, only 16 behind NFL legend Terrell Owens.  Compared to many other receivers, he played a lot fewer games than the average Hall of Famer.  He is 22nd on the list in games started among receivers and 33rd all-time among receivers in games played.  This goes to show how effective he was in the 14 seasons he played.

Does Andre Johnson deserve to make the Hall of Fame?

To put this in the most simple context possible, yes.  Johnson ranks among the best of the best at his position all-time in nearly every statistic and played quite a few fewer games than those at the top.  His impact on the Houston Texans is completely not possible to put in words, as he is one of, if not the best player in franchise history.  Despite never having the Super Bowl or offensive player of the year awards to back up his success, he is easily one of the best to ever do it at his position, with very little around him to make it easier.  If you ever want to be an NFL receiver, look up to Andre, he is the exact definition of hard work and success despite the situation.