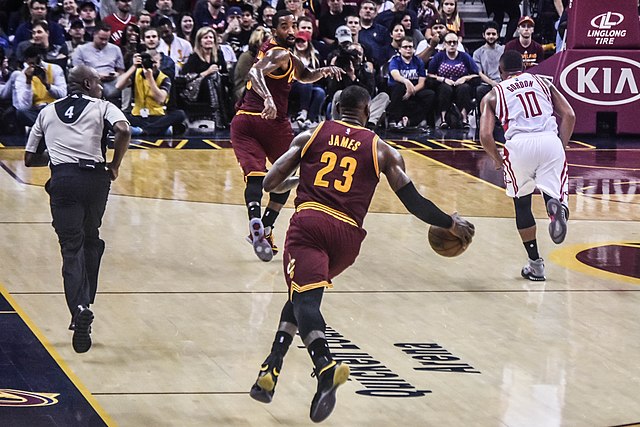 There are an infinite amount of influential icons that eat, breathe, and sleep football. The John Wick-like basketball player, Lebron James, has caught attention for making appearances at NFL games. It may be remembered that the Cleveland Cavaliers player showed up to support Johnny “Football” Manziel at a Cleveland Browns show-down many years ago.

The Dog Pound should rest assured knowing that Lebron is still a faithful Browns fan. After the Browns squad defeated the Carolina Panthers in Week 1, James tweeted “Wow Brownies!!!!!!!! @Browns AYYYYEEEEEE”. Although, I’m confident that James isn’t waving a foam finger with a Browns logo at this moment (as the Browns sit at 2-5 – which is tied with the Pittsburgh Steelers for last in the AFC North).

Last season, James stated on the Manning cast (on Monday Night Football) that he was a Browns fan, as well. It’s clear the case is closed on the question of whether the Cavaliers savior supports Cleveland’s NFL team. So, does Lebron feel bliss for any other squad? Well, James recently express that he is breaking up with the Dallas Cowboys — as he no longer supports the team led by Dak Prescott and Micah Parsons. He made it abundantly clear that he doesn’t support the Boys after the Cowboys ownership aimed to prevent their players from kneeling during the National Anthem.

James may also have mixed feelings about the controversial Deshaun Watson, but he should feel pleased that CLE will soon have an elite QB on the field and that the Browns will be really able to compete with the Cavaliers for the title of the best team in Cleveland. The Browns famously failed to make the playoffs last season, but they did make the post-season in 2020.

Let’s not forget that there are also countless other well-reputable Browns fans — such as Kid Cudi and Drew Carey. Of course, the voice behind “Hound Dog”, Elvis Presley was also a Browns fan! According to 24/7 sports, Presley was friends with Jim Brown (and Brown’s running style) and he even requested Gene Dickerson to send him Browns games every Monday. The article also states the King would also go into coach mode and liked to draw up his own plays in touch football with his pals.

Lebron will continue to support his squad through thick and thin. Hopefully, he can pass on his magical touch to Jacoby Brissett Deshaun Watson-led team for ages to come.