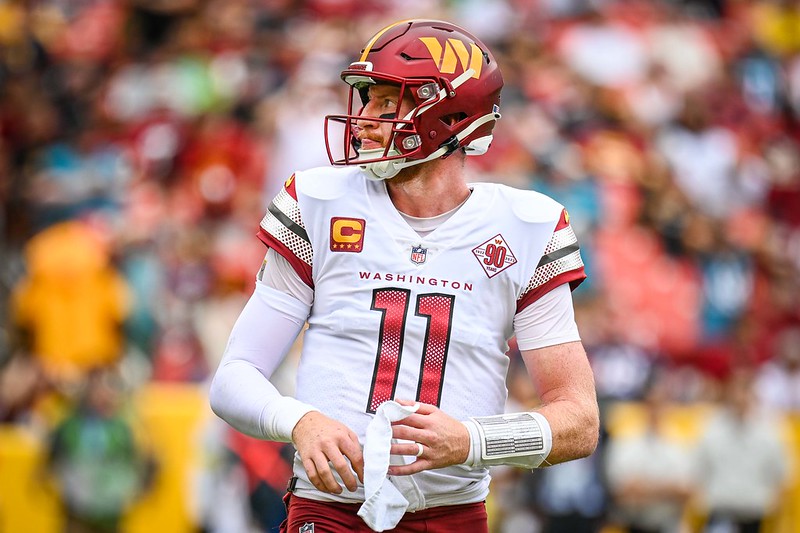 Ron Rivera has named Carson Wentz the starting QB going forward on Wednesday morning. I’m sure this was very difficult for Ron as he weighed both the pros and cons of this decision. I totally understand why he made the decision to start Carson, I mean the Commanders did pay him a lot of money to be their starting QB. From a football side, I also understand and here’s why I think this is the right decision.

You know what your going to get with Taylor Heinicke at the helm. That is, somebody that can escape the pocket make a crazy throw and keep the play alive. He also plays with moxie and the players love to play for him. What you don’t get from Taylor is the deep accurate ball, the arm strength, the experience. This is everything Carson has. There have been reports that Carson Wentz had time to reflect on his game and what he needed to work on. For Carson, he has to not take so many sacks, if there’s nothing available, check it down to Antonio Gibson or Brian Robinson Jr. I think if your Rivera you tell Carson, I just need you to run the offense and continue to do what Taylor has been doing. That means run the ball first, mix in some play action and play good defense. First and foremost though, protect the ball. If he does that, the Commanders should be successful.

A bonus with Carson is the ability to throw the deep ball and utilize their fast and talented receivers. If they get down 14-0, I feel more comfortable with Carson leading the team and the ability for him to get chunk plays back more quickly. There is a risk/reward with Carson but if this team makes the playoffs and want any thought of making a run, Carson needs to be the guy. If they stick to their identity the last 9 games or so, they should be fine. The real success of this team, will be the ability of the defense to continue playing like they have. This will make Carson’s job way easier. It remains to be seen how this will turn out but after some thought, Wentz gives the Commanders the best chance to win the next two games and then make a run in the playoffs.