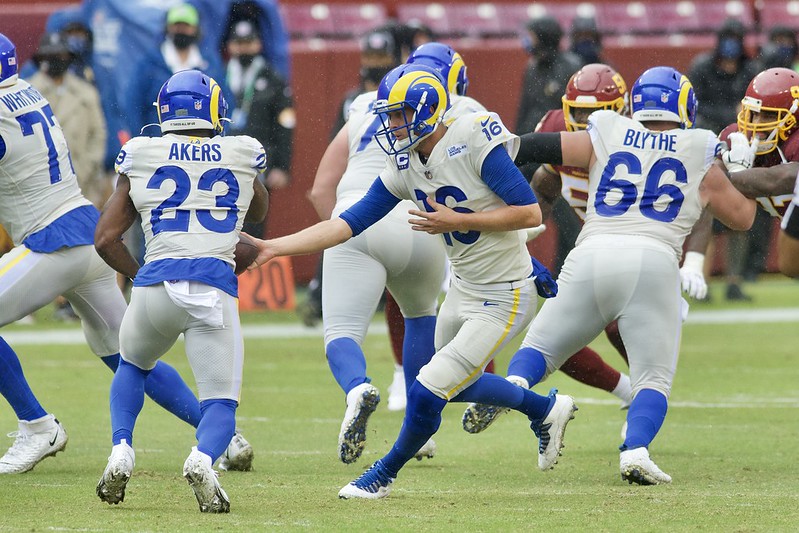 We are back with our Week 16 edition of DAWGS Of The Week. This series highlights the players who surpassed their projections for the current week. We use Sleepers’ PPR Format for the point system and forecasts. Let’s look back at the players that swung their team to victory this week.

Sam Darnold put in a solid performance to lead the Panthers to an upset victory over the Detroit Lions. The Panthers QB played his best game of the year when he threw for 250 yards and a TD to D.J. Moore. He also rushed in for a TD. The run game helped set the pace for the Panthers and made Darnold comfortable. Carolina is just a game back from the division lead as they face Tampa Bay in Week 17.

Cam Akers saved his fantasy owners with a performance for the ages. The Rams RB ran for 118 yards and three rushing TDs in a blowout victory over the Broncos. The LA Rams have interesting pieces for next year and Cam Akers looks to be the RB 1 next year.

Kendrick Bourne shocked everyone as he was the best WR in terms of overcoming fantasy projections this week. Bourne caught six passes 100 yards and a TD. He also had a run for 29 yards. Injuries to DeVante Parker and Hunter Henry gave him an opportunity to shine. He will need a repeat performance to help the Patriots against the Dolphins next week.

T.J. Hockenson led all fantasy players this week with an amazing performance against the New York Giants. The big trade deadline acquisition caught 13 balls for 109 yards and two TDs. His move to the Vikings has been a blessing, especially with Kirk Cousins passing the rock around. He has a date with the Packers in Week 17.

On Christmas, the Los Angeles Rams sent Nathaniel Hackett home with a dominating performance that shocked the NFL world. Cobie Durant took a pick-6 to the house as the final score. Larrell Murchison led the way with two sacks. Jalen Ramsey and Bobby Wagner each had a sack. Wagner’s interception even made Patrick Star laugh at Russell Wilson. This win basically ended the Denver Broncos season.

Thanks for reading! You can look forward to this series until the end of the season. You can check out the last installment of DAWGS Of Week 15.