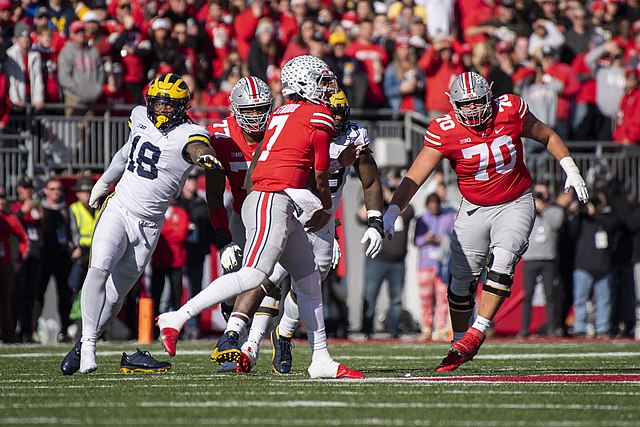 Hello and welcome to the inaugural edition of the 2023 NFL Draft Focus. In this series, we will take a look at the incoming prospects who are hoping for their names to be heard on draft night. Be sure to check often as we will produce content until the event’s start.

C.J. Stroud is a quarterback prospect from California. He attended Rancho Cucamonga High School, where he became known as one of the top QBs of his class. As a senior, he was named the Sun/Bulletin Offensive Player of the Year when he threw 3,878 passing yards and 47 TDs. In the famous Elite 11 camp, he was named MVP in 2019. Rivals listed him as a 4-star prospect and ranked #51 in the nation and #3 QB in the country. He committed to play for Ohio State.

As a freshman in 2020, C.J. Stroud sat on the bench and redshirted for Justin Fields. The year after, he won the starting QB job, impressing HC Ryan Day in the process. He threw for 4,424 yards and 44 TDs to just 4 INTs. He won multiple awards including the Big Ten’s Graham-George Offensive Player of the Year and was a Heisman Finalist. The Ohio State QB was getting a lot of praise and many were eager to see how he would perform the next year.

There was a lot of preseason hype with C.J. Stroud and Ohio State as he was one of the early favorites to be the Heisman Trophy Winner and Ohio State as a team capable of making it to the College Football Playoffs. They lived up to the hype as they were about to face Michigan in a battle for the Big Ten. Michigan was dominant as they handed Ohio State their first loss and potentially out of the College Football Playoffs. Stroud threw for 349 yards and two TDs while throwing two interceptions. Lady luck was on their side however as USC lost as the #4 seed and it bumped Ohio State as the last team in the playoffs. For the second year in a row, C.J. Stroud was also named a Heisman finalist.

C.J. Stroud tore up the vaulted Georgia defense. He made all the throws and showed his mobility to extend the plays and drives. People were hyped as the chances of a potential upset were brewing as Ohio State was up 38-24 at the end of the 3rd. Sadly, Georgia made a big comeback and had some calls go their way as Ohio State was down to a field goal attempt to win the game. The kicker missed the FG and Georgia won and advanced 42-41. In another timeline, we could be seeing Ohio State win the National Championship over TCU.

TEAMS WHO COULD DRAFT HIM

Now, C.J. Stroud’s draft range varies in the top 10 as he ranges from 2nd to even the 4th QB taken. Houston at 2, Colts at 4, Lions at 6, Raiders at 7, and Panthers at 9 are all in desperate need of a QB. It is possible that a team trades up for the first pick in order to get the services of a QB. For Stroud’s stock to improve, look for the pro days and draft combine as a way to impress the scouts and the competition. I think he deserves to be in consideration for the #1 pick in the NFL Draft.