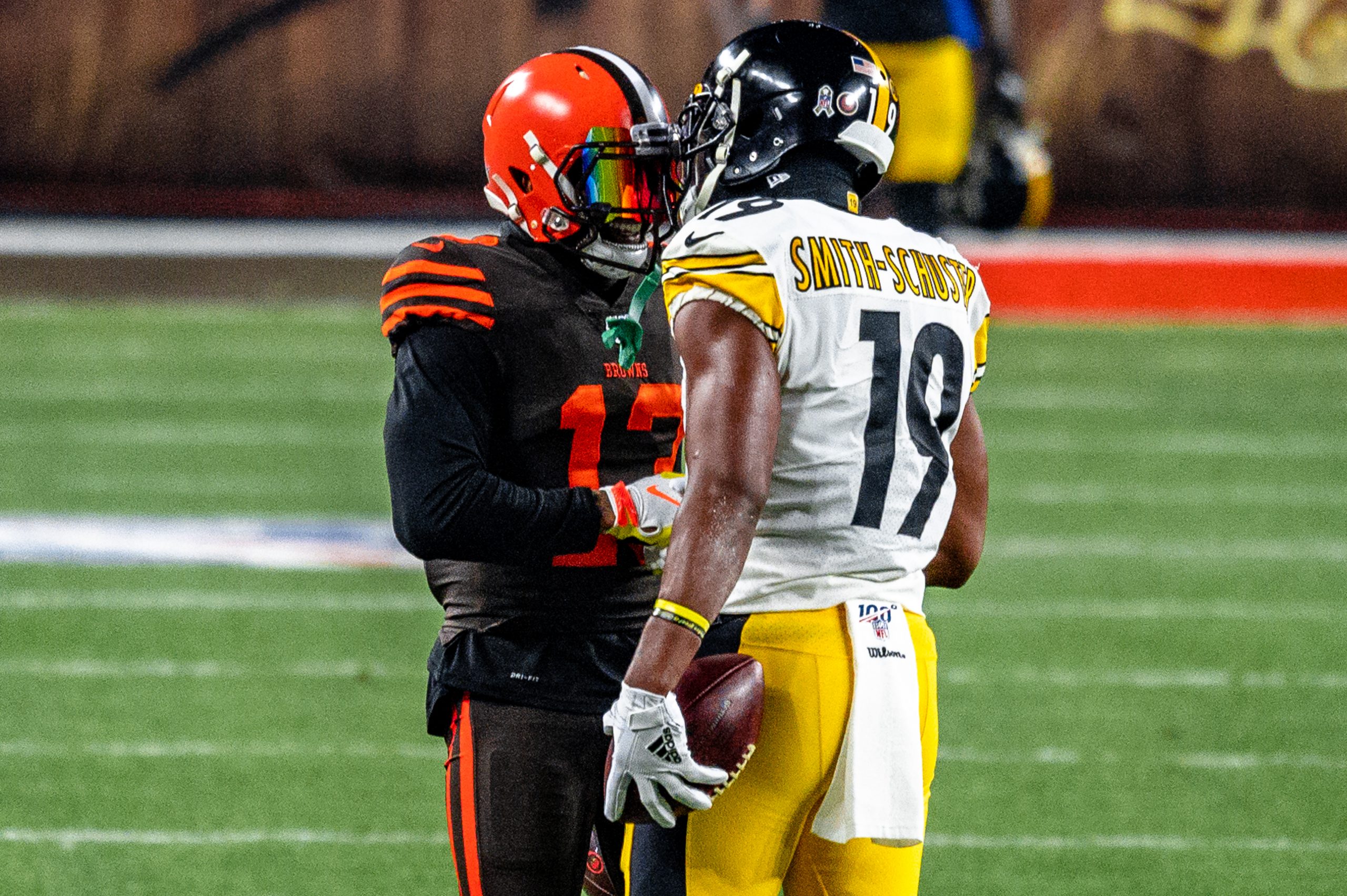 Where Could JuJu Smith Land as an NFL Free Agent Signing?

In 2017, JuJu Smith-Schuster entered the league as a baby-faced rookie with many question marks. But the USC product had potential, and he proved that early in his career, becoming the first player in NFL history to record five touchdowns before turning 21, while also becoming the fastest to reach 1,000 all-purpose yards.

It wasn’t until his sophomore season, however, that the young star really broke out.

In 2018, Smith-Schuster paired with All-World receiver Antonio Brown to form the deadliest duo in the NFL, with each surpassing 160 targets.

But the pairing’s success was short lived, as in the 2019 offseason, Brown was traded to the Las Vegas Raiders and subsequently released as a result of many off-field issues surfaced. Without Brown forcing defenses to account for him on the opposite side of the field, Smith-Schuster stumbled.

In 2019, the young Steelers star fell off hard, dropping to 42 catches, 552 yards, and just three touchdowns in 12 games. Part of this can be attributed to the loss of Ben Roethlisberger early in the season, but it was still an extremely disappointing year from the receiver.

Despite a resurgent 2020, in which Smith-Schuster piled up 831 yards and nine scores, it became more and more obvious as the season progressed that he had become more of a commodity than a necessity. With the emergence of Diontae Johnson and rookie sensation Chase Claypool, on top of Smith-Schuster set to hit free agency, it seems more and more likely that the now 24-year-old will be playing for a new team in 2021.

With that being said, lets break down three of the most likely destinations for JuJu Smith-Schuster in the new season!

Tua Tagovailoa is a strange case.

The former Alabama quarterback had an up-and-down rookie campaign for Miami in 2020, showing flashes of potential while also displaying issues.

JuJu Smith-Schuster could help by giving the young signal-caller options.

With just under $24 million in cap room, according to Over The Cap, the Dolphins will be able to sign the receiver to pair with veteran Devante Parker in an attempt to breathe life into their offense. Along with 2020 breakout runner Myles Gaskin and up-and-down tight end Mike Gesicki, the move would easily upgrade the talent around Tagovailoa and help move the needle in the right direction for Miami.

In Washington, Smith-Schuster would go back to what he does best: being a great WR2 behind a dominant number one. As reported by Sports Illustrated, Washington could be looking at receiving help in Free Agency. Terry McLaurin has emerged as a terrifying weapon for the WFT this season, amassing over 1,100 yards despite non-existent QB play.

While the team still has questions going into 2021 under center, whoever does happen to find a starting role there would benefit greatly from the two young receivers pairing together, along with breakout tight end Logan Thomas.

With cap space of $42 million this offseason, Washington has the room to make it happen while still remaining in the market for a quarterback upgrade.

It goes without saying, though, that this Batman-Robin pairing would make perfect sense to rejuvenate Smith-Schuster’s career!

The final team on this list may be the most interesting.

The Jets move into this offseason after a disappointing end to the season in which they failed in their attempt to “Tank for Trevor”. Despite this, they are still in a good position to draft a young quarterback to lead them moving forward, likely Justin Fields if they went that route.

Whoever they decide to go with, however, will need more help in the passing game than the team offers now.

With 2020 rookie Denzel Mims being the best option still under contract, the team will be looking at the deep free agency class at receiver to try to bolster the position.

JuJu makes near perfect sense for them moving forward.

The Jets are a young team trying to rebuild, and with Smith-Schuster still being just 24, he fits the timeline for the youth movement. Possessing the third-most cap space for the 2021 offseason (just over $63 million), along with a pair of first rounders, the team will be looking to compete sooner rather than later, so bringing in a proven option will be a big boost.

JuJu Smith-Schuster will be a hot commodity this offseason. After all, it isn’t often that a young star hits the open market. Many teams will be after his services, and he would help most teams out.

However, the biggest question surrounding him will be his off-field antics, as he faced a lot of backlashes this season for his immaturity on the viral social media platform TikTok.

If a team is willing to look past those issues, however, they will be getting a young talent just a few years removed from a Pro Bowl campaign.

Smith-Schuster’s name will be a hot topic this offseason, and he is someone everybody should be keeping an eye on!