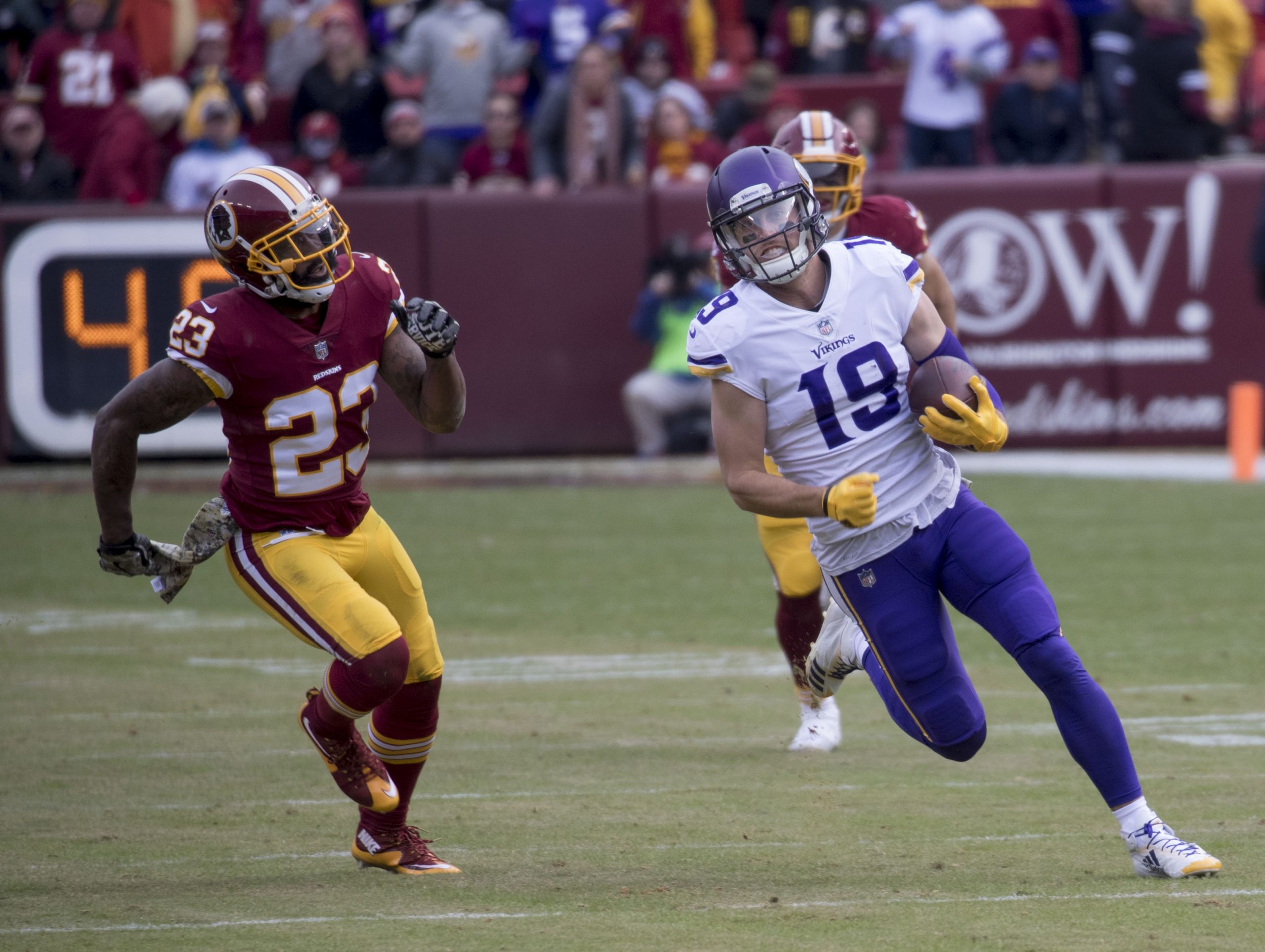 Why You Should Buy Adam Thielen

Wide Receiver is regarded as one of the positions of smaller importance to most Dynasty managers as Quarterback and Running Back positions usually take priority. RBs and QBs tend to score more points, but a consistent one is hard to come by. However, there are an abundance of solid fantasy-producing WRs throughout the league.

In three WR leagues and multiple flex position leagues, WR is just as important of a position if not more. While the top WR’s come at a steep price, you can get an older, middle-tier WR for a cheaper price, especially if that WR is over the age of 30. Dynasty isn’t always about having every young talent in the league and building for the next coming years ”“ it’s about winning the current season as well.

Older WR can come at a low price while still scoring consistently and help your team win a championship, without costing you your future. Even if you get only a year or two of real production out of these players, they can be worth the small price to pay. Here are three WR’s over the age of 30, that you should buy in your Dynasty leagues to help you win the 2021 Championship.

Julio Jones used to be the stud of all studs at the WR position in fantasy football. Before the 2020 season, Julio has finished inside the top seven in the PPR leagues since 2014. He posted an average of 1,565 yards per season in that time frame, on 162 targets with 104 receptions.

This consistency is rare in fantasy making Julio a coveted piece to any Dynasty team. Julio only missed four games over those six years giving managers confidence that he had the durability to maintain his greatness. Then 2020 happened, and a switch was flipped.

Julio only played in nine games due to a hamstring injury where he battled reaggravation all season. This made his owners drop him far down their lists of top WRs claiming the 32-year-old was done playing at the elite level. But, when you look at the games Jones was feeling healthy, he still produced elite numbers.

In Week 1, he put up 9 catches for 157 yards, with a YPC of 17.4. In the stretch between Week 6 and Week 9 for the Falcons, Julio had an average of seven receptions for 106 yards a game while scoring three times. In Week 13, Julio was targeted ten times for 94 yards.

When Jones was on the field and played his usual 80-90% snap count, he was back to his top-scoring ways. There are at least two years of this kind of production left if he manages to stay healthy as he is signed with the Falcons until 2023. The price is worth the gamble to add Julio Jones to your win-now Dynasty rosters.

Adam Thielen could possibly be the biggest touchdown threat of all WRs in the NFL. In 2020, Adam managed to catch 14 touchdowns, boosting his value for Dynasty owners.  His yardage totaled 925 yards in 2020 on 74 receptions, which are fairly average numbers – but his TD’s managed to make him the 10th overall receiver in PPR leagues.

What makes him a buy is that Thielen has never been a big name in the Dynasty community like Julio Jones mentioned above. Managers are not nearly as attached to him, but he is an unsung hero when it comes to winning on a weekly basis.

Thielen turns 31 this summer, and with the spectacular season he had last year, most owners are looking to trade him away. What those managers are forgetting is that Adam is signed up to 2024 with the Vikings earning an average of $13 million per year. It’s likely that Thielen will continue to produce these numbers with Minnesota.

Kirk Cousins is still there, he will remain in the same high-scoring offense and will have less talented defenders covering him – as most of the attention now goes to stopping Justin Jefferson. The Vikings don’t really have another Red Zone threat like Thielen.

They don’t target TE Irv Smith (five TD’s in 2020) or Jefferson (seven TDs in 2020) nearly as much, so look for him to continue those numbers in 2021 and on. Dynasty start-ups are taking Adam Thielen in the 10th round or later, so he could be going for a cheaper price than you are expecting and could help you win in the next three years.

If you are looking for a cheaper option than the above two and still are desperate for a WR in deep leagues or for a flex play, look no further than Cole Beasley. Cole was the WR 27 in PPR leagues in 2020 and had his best season yet since he entered the league in 2012.

Beasley caught 82 passes for 967 yards and scored four times. This is largely due to the Bills offense, and none other than Josh Allen’s rocket arm. With only an 11.79 YPC, Beasley is a quick route runner in the slot making him a PPR machine.

Twice in 2020, Beasley had 11 catches in one game ”“ that’s 11 points in PPR without adding in any yardage totals. His value to your team largely outweighs his cheap price making him a buy-in all PPR formatted Dynasty leagues.

Being 31, most owners don’t pay him much attention. However, Beasley is signed up until 2023 with the high-powered passing game of the Bills offense, and it doesn’t look like Josh Allen is going anywhere for a long time. Cole Beasley is a must-buy for owners struggling to find a flex piece to win the championship in 2021.

Dynasty: Over the Hill or Undervalued? Three Running Backs You Can Get at a Discount On Due to Their Age
Three QBs Under 25 You Should Sell
wpDiscuz
0
0
Would love your thoughts, please comment.x
()
x
| Reply