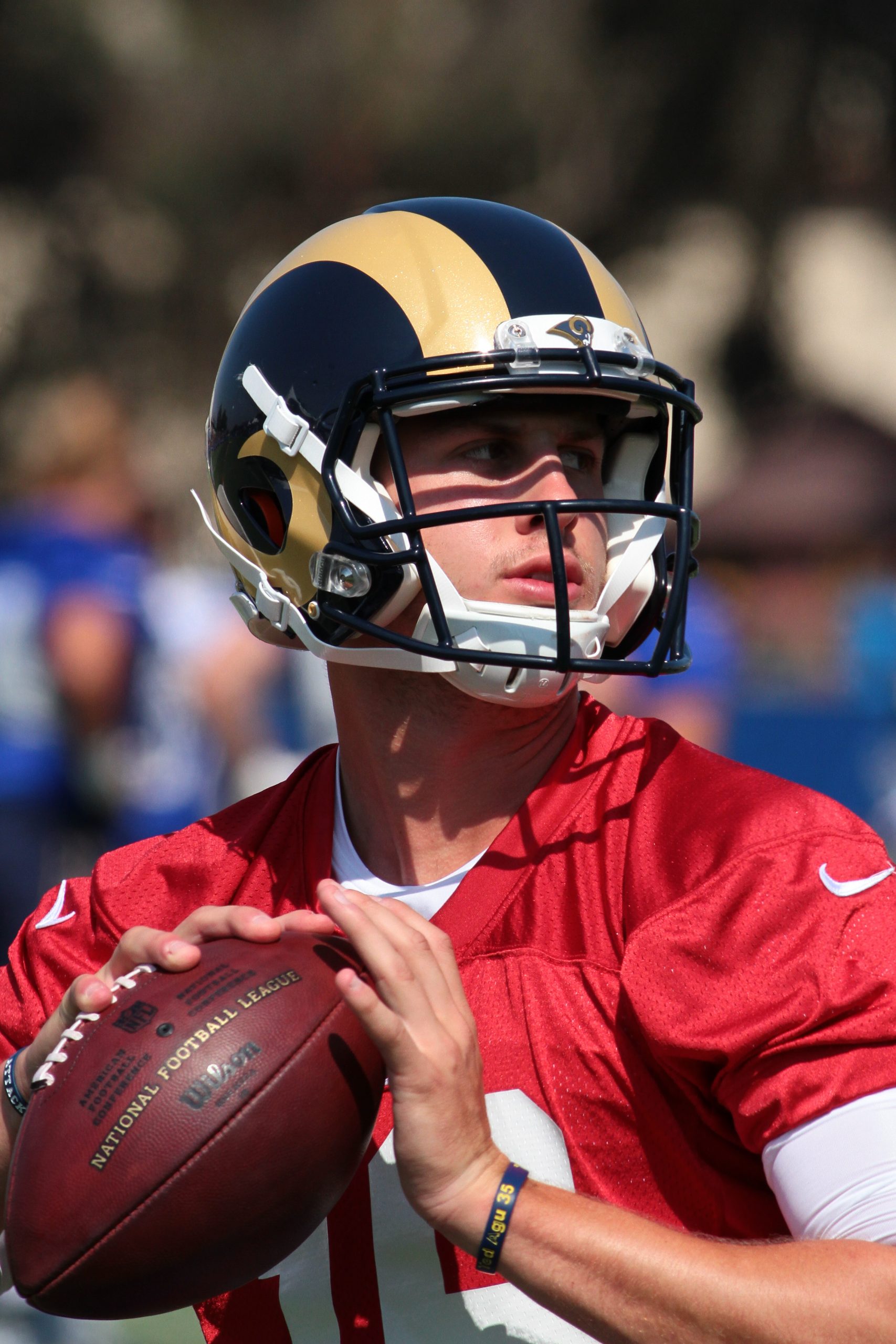 Andy Dalton Is a Buy

Hey all, happy to be here working on my first piece for Pro Football Mania!  Over the next few paragraphs I’m going to do everything in my power to talk about a few quarterbacks, while striving for my perfect crystal ball projection.  Alas, three sentences in and we’re already off to a great start.  Fantastic.

But let’s get to it and have some fun actually looking at players in the 2021 fantasy season.  And today’s focus is going to be on specifically the Quarterbacks of the NFC North.  So Aaron Rodgers, Kirk Cousins, and the newly acquired Andy Dalton and Jared Goff.

But before we even get into the players or metrics specifically, its important to know that in any buy/sell scenario, we’re not operating in a vacuum.  I may “buy” Ryan Fitzpatrick and “sell” Patrick Mahomes for the 2021 season.  That doesn’t mean I’d take Fitzpatrick over Mahomes in a draft, more so an explanation of where they’re each going respectively, I like the value of one player over that of another.

Additional programming note:  we’re evaluating Average Draft Position (ADP) and player value in April.  That’s absurd.  These will change.  Maybe not a ton, and there is still value in evaluating their general perception among the industry, but changes will happen.  The draft is right around the corner and could very easily shake up everything.

But that’s enough with the caveats and nonsensical hedges by which I’ll cover myself when one or all of these calls flame out miserably.

The first thing we have to do is stop and see the respective ADPs of each of the guys we’re discussing.  Right now, Aaron Rodgers is the highest ranked QB being taken of the four, towards the middle of the 4th round in 12 team leagues.  Andy Dalton is going undrafted.  As a note:  This data is full PPR (relevant only for the average draft spot, even though it means nothing to the QBs themselves) provided by fantasydata.com.

These are the respective values by which we’re going to judge our buy/sell decisions, as every player has a price.  Its just now our responsibility to figure out if its worth paying.

Woah hey alright, put the pitchforks down for a second”¦ I know Rodgers is coming off of an MVP season and all of that.  He’s a fantastic player.  That said, Rodgers threw 48 touchdowns in 2020, a career-high, as well as a figure that best his three previous season totals by over 20 touchdowns.

Now, I should take this opportunity to say I don’t expect Rodgers to regress to his totals of the past three years.  He’s playing better following 2020 than he was in those years where he threw 16 (in 7 games), 25, and 26 touchdowns, respectively.  I think the happy medium is right in-between that range, likely somewhere in the 30s.  And that’s completely fine.  But I think overall touchdowns are most likely to regress to what would be more “normal” for a quarterback of his age and use.  And nowhere reflects this quite like the goal line.  Of his 48 touchdowns, a whopping 29 of them came with less than 10 yards to go.  That number is utterly obscene.  And while it speaks to Rodgers’s trademark efficiency and safety with the ball, it’s a number that will likely normalize in 2021.

The last metric I want to point to isn’t even one of Rodgers, but rather that of the man he primarily shares the backfield with, Aaron Jones.  In 2020, within that same “opponent’s 10 yard line” range, Jones got 20 carries and converted 6 of them for touchdowns.   In 2019, what was considered a “breakout” year for Jones, he converted 11 of his 19 carries within the same range.   Similarly to Rodgers, he went from highly efficient to moderately inefficient given his opportunities, and could see a similar rebound to mirror a decline from Rodgers.  And that doesn’t even factor in the likely increased opportunities for 2nd year back AJ Dillon, who seems like he was built for goal-line work.

All in all, I see Rodgers regressing a moderate amount within the opposing 10 yard line.  Coupled with the likely increased efficiency of Aaron Jones, this could very easily result in a slight decline in the fantasy outlook of Rodgers.

As of this moment, Kirk Cousins is going off the board at Quarterback 20, in the back end of the 11th round.  And simply put, he’s better than that.  Always has been.  Over the last 5 years, his average finish among QBs has been 10.6, averaging just over 18 points per game.

And I find this telling, as he’s had Dalvin Cook during his entire Minnesota tenure (when healthy of course).  Any narrative of him being on a run-first team simply doesn’t hold up for that reason alone.  Sure, a reasonable argument can be made that the scheme doesn’t make it such that he’ll have a 50 touchdown season, and that’s perfectly reasonable.  But getting a mid to high end QB2 at an ADP of 20 if the definition of value.  Especially when he has two elite receivers in Jefferson and Thielen, and dynamic outlet options in Cook and Tight End Irv Smith Jr.

”¦all that said, I don’t want you to go into the season with Cousins as your primary plan at the position.  You should probably be shooting a little higher and locking up a guy that does have the potential for a bigger statistical output.  But if you’re looking to draft a backup QB to pair with a high-risk guy, Cousins is a fantastic option to return above-drafted value.

I cant pretend, I started the brainstorming piece of this article fully expecting Goff to be a buy.  The presumption would be that Detroit was going to likely be a bad team and that Goff would be able to garbage time his way to fantasy success.  And there’s a part of me that does still believe that.  Its easy to forget that towards the end of his time in Jacksonville, Blake Bortles was a valuable fantasy asset, as the team was often behind and he had to scramble in hopes of catching his team up.

I thought I’d likely try to push a similar narrative with Goff, I really did.  But then three main factors pushed me off of this narrative.

I won’t give the first its own paragraph, as its moderately self-explanatory.  For a player to get moderate value in the “dart throw” category, he has to be going late.  And the value of QB23, while certainly low, isn’t the most preposterous thing I’ve ever seen.  So that was a deterrent, but really points 2 and 3 got me thinking.  The first one is also moderately straightforward as well.  As it stands on April 7th, 2021, the Lions’ receiver room consists of Tyrell Williams, Breshad Perriman, and Quintez Cephus.  Yikes.  If you’re going to be in catch-up mode and constantly pushing for points to close games, it would generally be helpful to have some elite weapons on the outside to help drive that goal.  This group likely isn’t it, even if you count Tight End TJ Hockenson in that mix.  And even if they were to add a receiver at 7 overall, I don’t know that a young rookie quite moves the needle enough to make me suddenly feel confident in the group as a whole.

The final point is one of speculation.  And its driven by the idea of not knowing what exactly Jared Goff is.  We’ve seen one season of him without the play-action and QB friendly system of Head Coach Sean McVay.  That season (his rookie season) had him looking like one of the absolute worst Quarterbacks in the NFL.  Yes, I know, rookie QB on a bad team and all of that.  I get it.  There are ways in which it can be explained away.  But any explaining HAS to be done with at least some amount of respect to the concern.  None of us know.  We think we might know, but its no certainty that McVay wasn’t the driving force behind Goff looking completely serviceable following his rookie year.

My goodness this is free money.  And I both love and hate the fact that I took it.  Andy Dalton is an easy easy buy.  And simply put, its because he’s free.

Will Andy Dalton be an actual usable fantasy asset in 2021 though?  That’s the question we all have to look at and ask ourselves.  And my answer is”¦ kinda?  And I know, that’s such a hedge.  No doubt.

But the other side of that coin is that in 2020, Dalton wasn’t a fantasy tire fire either.  When he came back in week 11, he averaged over 17 fantasy points per game, which would have been a stream-worthy QB2 in many formats.  And that’s simply the definition of value if you can get it at an undrafted price.

All that said”¦ that was 2020.  And in Dallas.  Where the weapons are such that I could put up fantasy value throwing to those weapons.  Chicago is”¦ not that.  Chicago has Allen Robinson, who is fantastic, but beyond that is a plethora of question marks.  Can Darnell Mooney and Cole Kmet take the next steps?  Is Anthony Miller going to get traded?  Can Tarik Cohen come back from injury to be an outlet in the passing game?

I don’t have the answers to any of these questions, but I can tell you that I have a surprising amount of confidence that this offense won’t be terrible in 2021.  I think Dalton is a professional quarterback who can elevate the play of the other guys such that they can in turn facilitate his value as a fantasy quarterback in 2QB and SuperFlex leagues.  I wouldn’t push it in single-quarterback formats, but if you completely punt on the position or find yourself in a bind, Dalton is likely an asset that has far more value than his current market price.

Caveat: All of the things can and likely will change.  Its April, have fun with it and understand the draft is going to throw a wrench is all of your carefully laid plans.  But at the end of the day, it’s just a game we do for the amusement of challenging and heckling our friend, so whatever.

Hopefully you’ve enjoyed this diatribe.  If you want to discuss it or anything else related to the NFL, please don’t hesitate to hit me up on twitter, @FF_AHayslip.