Grading each first round pick of the NFL draft 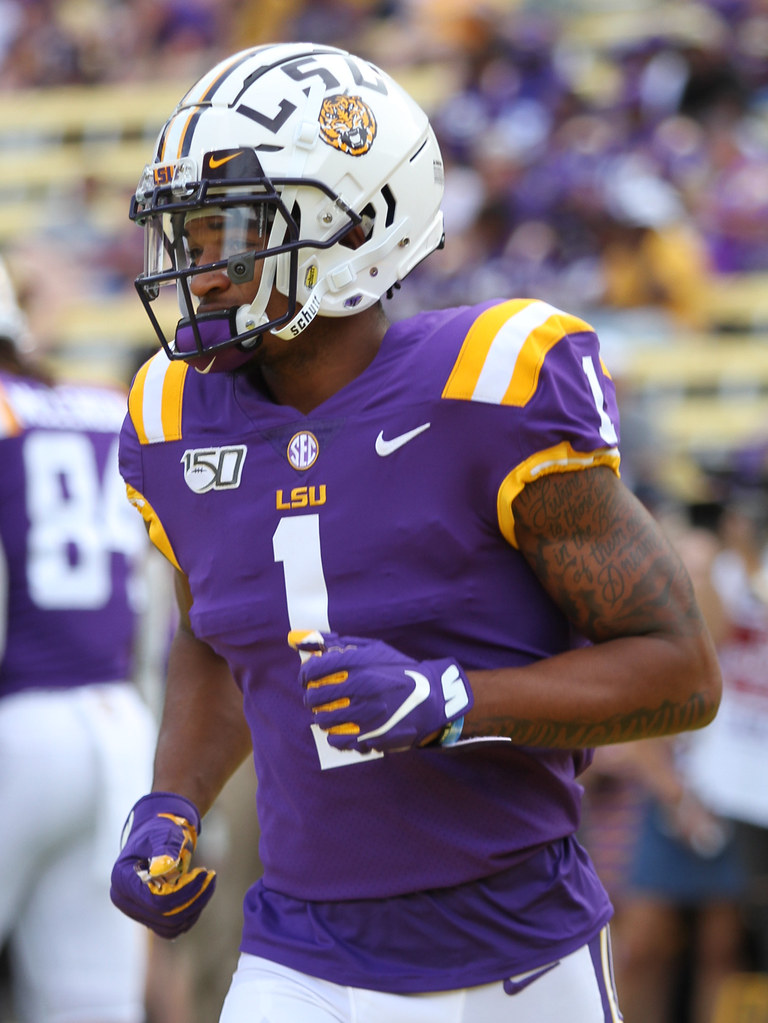 Honestly, it seemed like a weight was lifted off of Lawrence’s shoulders, as the Jaguars make it official. Behind Elway, Manning, and Andrew Luck, Lawrence is the highest rated quarterback in recent history. For Jacksonville, this was a no brainer. Finally, they have their guy.

Personally, I would have gone with Fields. But, unfortunately, fans don’t have say over General Managers. As with Lawrence, Wilson was not a surprise. Recently, GM Joe Douglass traded away Sam Darnold, opening the job for Wilson. Now, the Jets have to build around the BYU product.

San Francisco 49ers (via Houston thru Miami) | Grade: A-

After trading up for this pick, the 49ers chose the quarterback out of North Dakota State. From not receiving a single FBS offer out of high school, Lance has fought an uphill battle. That hasn’t stopped him as he now takes over a Kyle Shannahan offense. Also, a healthy Greg Kittle helps.

Realistically, the Falcons probably wanted Lance and went with plan B. However, they did land the most athletic player in the draft. At 6’6, Pitts is a matchup nightmare, with elite speed. Compared to Kelce, Waller and Kittle, clearly, Pitts has a very high ceiling.

“Wow!” to quote the great Booger McFarlane. Surprisingly, the Bengals did not take an offensive lineman to protect Joe Burrow. Instead, they reunited former LSU champions. In Chase, the Bengals have an absolutely lethal threat. Hopefully, Burrow and Chase will have an instant. connection, when Burrow returns.

Miami Dolphins (via Philly) | Grade: B+

In his college career, Waddle had 17 touchdowns, of which the average pass was 44 yards. Explosive is an understatement. For the second straight pick, a receiver is reunited with his quarterback from national champions. Clearly, Miami has full faith in Tua. Now, with Waddle, Fuller and DeVante Parker, Tua has ample weapons.

After trading for Sam Darnold, the Panthers decided they are satisfied with a trio of Darnold, CMC and Samuel. Mel Kiper thought the Panthers were drafting a lineman or Heisman winning Devonta Smith. Instead, they took the first defensive player of the draft. Son of Saints receiver Joe Horn, Jaycee will be put to the test often. In the NFC South, Horn will face Julio Jones, Michael Thomas, and Mike Evans twice each. Good luck, rookie!

Earlier, the Broncos traded for Teddy Bridgewater. As a result, they were not going to be in the quarterback conversation. Instead, the Broncos decided to. Improve their defense with an elite corner. Immediately, this pick may not be as flashy as the receivers in this class. However, the Broncos are facing Patrick Mahomes and Justin Herbert twice each for the foreseeable future.

Philadelphia Eagles (via Cowboys) Grade A

As the third Alabama player taken, Devonta Smith is also reunited with his former college quarterback. As with Waddle, he played for a national champion Alabama team, with Jalen Hurts as quarterback. In Smith, the Eagles took the best player available, and addressed their biggest weakness.

Chicago Bears (via Giants) | Grade: A

With the Smith going to the Eagles, the Giants were out of luck at receiver. Instead, they capitalized and traded the pick to Chicago.

In his college career, Fields threw for 63 touchdowns and only lost two games. Impressively, he has been listed as the second best quarterback in this draft by many analysts. Yet, Fields slipped down out of the top ten and the Bears seized the chance. Seemingly, the Bears drafted Fields to make amends for infamously drafting Triibusky over Mahomes and Watson. While Fields likely won’t start in 2021, he will be the franchise quarterback.

Dallas Cowboys (via Philly) | Grade: A-

With the recent retirement of Sean Lee, the Cowboys needed a linebacker. In Parsons, the Cowboys get a high upside player.

Arguably, the best lineman in this draft, Slater is an excellent selection for the Chargers. After Joe Burrow’s injury, this pick makes even more sense. Clearly, the chargers want to protect their young star, Justin Herbert. Additionally, Slater is going to provide improved run blocking for Austin Ekeler because he has played tackle, guard and center in his career.

For Jones, obviously, the comparisons to Brady come with the territory.  However, Brady was infamously taken in the sixth round, not 15th overall. This pick seems like the biggest reach of the draft. But, if there’s anyone who can turn Mac Jones into a star, it is Bill Belichik. Impressively, Jones goes from Saban to Belichick. Yet, with a Saban quarterback, it is hard to tell his true upside.

Interestingly, the Cardinals went with Collins rather than another receiver or a running back. In Collins, Arizona gains another player similar to Justin Simmons. Which is definitely a good thing, because Collins is very talented. But, the Cardinals need another receiving threat for Murray, to take pressure off of Hopkins.

True to character, Jon Gruden surprised many with the selection of Leatherwood. From Alabama, Leatherwood is a truly gritty lineman. Notably, the Raiders had lost three of their starting linemen from a year ago. With Leatherwood blocking, Waller and Jacobs will be more explosive in the pass game.

Clearly, the Dolphins are willing to take a risk on a player with a history of injuries in college. Between Jaelan Phillips, Jaylen Waddle, and Tua, the Dolphins have made that clear. But, undoubtedly, Phillips has a ton of upside. If he can stay healthy, then Phillips will help the Dolphins defense to pressure Josh Allen, Zach Wilson and Mac Jones.

In 2020, the Football Team enjoyed the success of rookie superstar Chase Young. Along with Montez Sweat, Washington’s defensive front led them to the playoffs. Adding Jamin Davis almost seems unfair. Impressively, Davis is an elite tackler as well as a steady pass defender. However, this pick did not address their offensive line, which Washington desperately needs to improve.

Originally, the New York Giants held the 11th pick, but traded with the Bears. Clearly, with the top three receivers off the board, the Giants no longer needed the pick. In Toney, the Giants got the fourth receiver on their big board, while gaining three picks in the future. Not a bad return.

Without a doubt, Paye is a tremendous athlete. However, he is very raw and inexperienced. For the Colts, pass rush was absolutely a top concern. But Paye will need to be developed. Additionally, the Colts lost a pair of linemen to free agency. With Wentz taking over at quarterback, an offensive lineman would have made sense.

In 2020, the Titans pass defense was terrible. Absolutely, terrible. With Caleb Farley, the upside is unquestioned. He is extremely fast and can play man coverage. However, the risk with Farley is his back. After a major surgery in March, Farley may have to miss the beginning of the season, delaying the start to his career.

Earlier in the night, the Vikings traded the 14th overall pick to the New York Jets, who took a lineman. Evidently, Darrisaw was the man Minnesota wanted. Essentially, the Vikings were able to get the lineman they desired, while gaining draft capital. In Darrisaw, the Vikings add protection for Kirk Cousins. As a result, Justin Jefferson and Adam Theilen get more time to run routes, and Dalvin Cook will benefit from better running lanes.

In the NFL, few teams have a history of running backs like the Steelers. Franco Harris, Jerome Bettis, Le’veon Bell and now Najee Harris. In 2020, the Steelers started the season 12-0 but ended the season losing three of their final four games. After getting embarrassed by the Browns in the playoffs, Pittsburgh desperately needed to add a run game for Big Ben. With Harris, the Steelers get a complete back, with tremendous speed, size and athleticism.  Immediately, Harris will have an impact in the Steelers’ high power offense.

Similarly to Harris, Travis Etienne has incredible speed, size and athleticism. But, there is no reason the Jaguars wouldn’t be able to get Etienne with the 33rd overall pick. Ironically, in 2020, James Robinson went undrafted and started 14 games for Jacksonville. Logically, the Jaguars would want to take a lineman to protect Trevor Lawrence. Instead, they continued the trend of pairing college champions with their college quarterbacks. Realistically, this just was just unnecessary for Jacksonville.

In the AFC North, the Browns have to play Lamar Jackson, Big Ben, and Joe Burrow. By taking Newsome, the Browns add a corner to work opposite Denzel Ward. Coming out of Northwestern, Newsome is a great coverage corner, who many expected to go earlier in the round. Now, with the addition of Jadaveon Clowney, Cleveland’s defense is going to be even better than a year ago.

Finally, Lamar Jackson has a true deep threat. After missing out on Kenny Golladay in free agency, the Ravens signed Sammy Watkins. Still, Lamar benefits from having a route runner like Bateman. However, with Elijah Moore still on the board, it seems that the Ravens chose the riskier of the two. Additionally, the Ravens need a tackle because they traded Orlando Brown Jr to the Chiefs.

With the departure of Trey Hendrickson, the Saints needed to improve their pass rush. However, Turner seems like a reach at 28th overall. While at Houston, Turner was very productive while on the field. But, he did suffer several injuries. Seemingly, the Saints could have gotten Turner or a similar edge rush later.

Hours before the draft, it was reported that Aaron Rodgers wants out of Green Bay. Naturally, internet chaos ensued. Rumors swirled in every direction possible, including many potential trades sending Rodgers in exchange for a top pick.

At the time of the pick, Rodgers is still a Packer. With that said, the Packers addressed their biggest flaw from 2020, their secondary. After getting torched by Tom Brady in the NFC Championship game, the Packers needed work on their pass defense. At 29th overall, Eric Stokes is a top corner prospect.

With 15.5 sacks in 2019, Rousseau rose on draft boards. However, a lot of those were coverage sacks. Then, Rousseau opted out of the 2020 season. While there are some concerns regarding his skill set, Rousseau has a large frame and can become a great pass rusher. Essentially, the Bills made this pick focusing on a rematch with the Chiefs. However, Rousseau is unpolished and will need coaching.

Unfortunately, for Baltimore, Oweh will not be able to replace both Matt Judon and Yannick Ngakoue. He is, however, a great steal at 31st overall. Incredibly, Oweh was named to the All-Big Ten defense, despite not recording a sack in 2020. Clearly, he was still impressive enough to earn the praise. At 6’5 257 pounds, Oweh ran a 4.37 forty-yard dash. Simply put, Jayson Oweh is an athletic freak. Unlike Rousseau, Oweh is ready to make an impact right away.

As with the two picks before him, Joe Tryon is a high upside pass rusher. Coming into the draft, the Bucs have had a pretty perfect offseason. They managed to resign all of their key free agents, and Drew Brees retired. Currently, the Bucs will not need Tryon to start right away. But, he makes an excellent insurance policy for potential injuries.