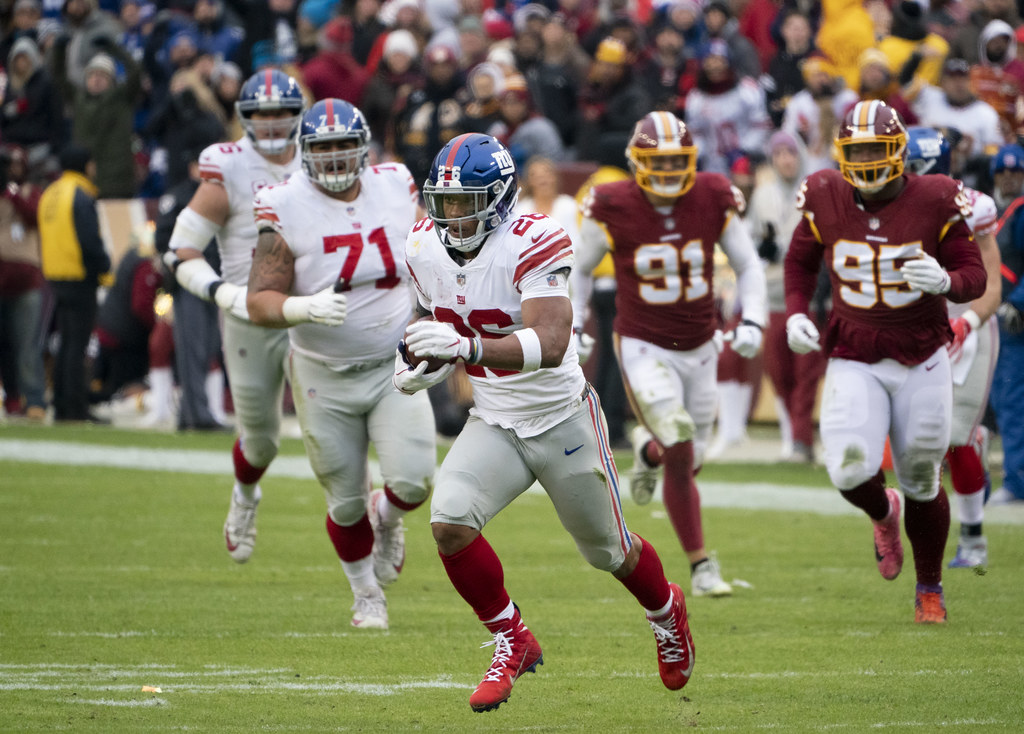 Could RB Saquon Barkley win Comeback Player of The Year?

Every year, the NFL announces one NFL Comeback Player of the Year Award. Some of the coolest stories of NFL careers, like Eric Berry in 2015, battled and beat cancer. Last year was no different when Alex Smith won the award. Today I will cover three candidates for comeback player of the year for the 2021 season.

Alex Smith was the epitome of what one would expect for an NFL Comeback Player of the Year Award winner. The man about lost his leg from an injury obtained on the field during an NFL game. An injury that was so atrocious, it led to seventeen surgeries! Smith broke his leg in 2018, missed the entire 2019 season to play in eight games for the Washing Football Team, where he started six games.

In those six games, Smith went 5-1, threw for over 1500 yards, and had six touchdowns. Not bad for a guy who wasn’t sure he would ever see the football field again. Alex Smith won the award in a landslide, 49 votes for, and Big Ben Roethlisberger got the only other vote.

Saquon Barkley Coming Back From Injury

To be clear, I don’t see anyone next year as a clear favorite for such an award. Christain McCaffery is coming off of any injury, as is Saquon Barkley. Two players that have had great success that saw their respective seasons end in lackluster performances.

Saquon has had such high expectations since being taken second overall by the New York Giants in 2018. Barkley primarily lived up to expectation his rookie year, where he won Rookie of the Year.

In 2019 Barkley battled a high ankle sprain for most of the year, then last year in 2020, Barkley tore his ACL and was lost for the season on week two. Before being lost for the season, Barkley averaged 1.8 yards a carry and 17 yards a game, atrocious numbers.

If Daniel Jones can start forcing defenses to respect the passing game, Saquon could be in store for quite the season. Let us not forget the season Adrian Peterson had after tearing his ACL, and Peterson did it much later in the season. As of writing this, there is zero belief that Barkley won’t be 100% ready by the start of the season.

The Giants need Daniel Jones to get those defenses to stay a little more honest instead of selling out to stop Barkley. If he does that and Barkley stops pressing and trying to break the big play on every down, Saquon has a real shot at being a position leader in the NFL.

I expect Barkley to improve upon his rookie stats and finally show what a complete back he is. However, if Barkley blows up, I think he’s capable of it; he should be considered for comeback player of the year.

Another player taken early in the 2018 NFL Draft was Sam Darnold, who was taken third by the New York Jets. Since the draft in 2018, Darnold has dealt with nothing but challenges.

You could argue his largest challenge was being on the team with head coach Adam Gase. I believe that the horror story that we call Adam Gase is overstated, but what isn’t overstated is the impact a coaching staff has over a young developing quarterback.

Sam Darnold now finds himself with what I think is a great coaching staff that Matt Rhule has built under his leadership in Carolina. It’s a fresh start with a team that looks to air it out. I thought this was a perfect landing spot for Darnold.

Another reason why I am so excited for Sam Darnold and his role with the Carolina Panthers is what the Panthers did during the draft. It’s more accurate to say what they didn’t do at the draft.

The Panthers had every opportunity to select a quarterback to either back up their new, unproven acquisition or potential upgrade if the organization thought that was appropriate. Instead, the Panthers didn’t take a quarterback, and they picked up the fifth-year option on Darnold.

You don’t have to read the “tea leaves” to see that the Carolina Panthers have all the faith in the world in Sam Darnold. Surprising since some people have already labeled Darnold a bust. Apparently, Matt Rhule feels much differently because, at this point, they are all in with Darnold for 2021.

Teddy Bridgewater was adequate in that same offense last year, and the organization didn’t think twice from moving on. However, if Sam Darnold somehow puts together an all-pro season, which I realize is a very bold take, he would easily be in line for Comeback Player of the Year.

The last player I will mention is DJ Chark. Chark splashed on the scene in 2019. Jacksonville drafted Chark in 2018 but only appeared in 11 games where he had 14 catches on 32 targets. In 2019 Chark had 73 catches for 1008 yards and touchdowns.

Sadly the 2020 season saw Chark essentially go underused, where he caught 53 catches for 706 yards. Chark has not played all 16 games in a season yet. That is a concern. Chark also hasn’t had a quarterback to count on. The rookie Trevor Lawerence will be the eighth quarterback Chark has played with since being drafted.

There are plenty of question marks about DJ Chark and what he can indeed be at the NFL level. But, at the same time, Chark has flashed, and the Jacksonville offense, as bad as it was in 2020, was much better when Chark was on the field.

Jacksonville took one wide receiver in the draft, round six, and they took Jalen Camp out of Georgia Tech. So Chark should be slated into that number one receiver spot, with a legit quarterback under center now.

If Chark can stay healthy, and as much as that offensive presumably will be throwing the ball, Chark could finish the season as a top ten to fifteen wide receiver.