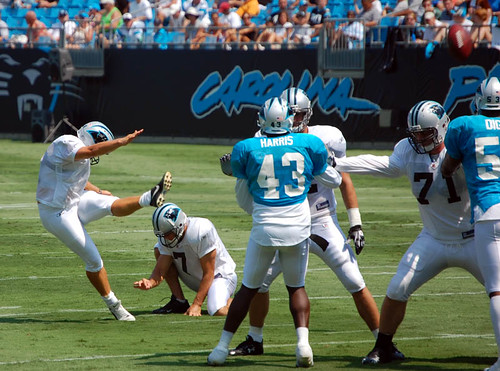 Can the Vikings uphend the Panthers?

In the NFL, and really across all sports, the term “moral victory” is often thrown around. Teams with low expectations who surpass those expectations while still suffering defeat frequently call those performances moral victories. The Minnesota Vikings managed to do the complete opposite in Week 5 against Detroit. In no capacity was a loss against the Lions going to be acceptable, and yet, after leading almost the entire game, it took a 54-yard Greg Joseph field goal as time expired to snatch victory from the jaws of defeat against the Motor City Kitties. In a world of moral victories, this was about as close to a moral loss as you can get.

Kirk Cousins and Mike Zimmer had quite possibly the most awkward post-victory celebration of all time, and while they were both fired up, neither were too happy about how the game went. Fans have rightfully felt the same way this week. Now the 2-3 Vikings head to the 3-2 Carolina Panthers before they head into their bye. Do not let the Panthers winning record or 3-0 start fool you, this is not a good football team. That is reflected by Minnesota, who has had a very unimpressive past 2 weeks, being 2.5 point road favorites.

After giving up a very generous package in a trade for Sam Darnold this offseason, the Panthers started hot, but Darnold has shown he is still the QB he was in New York. As anyone in Minnesota knows, though, being expected to win and taking care of business is a very big difference. With the Vikings’ post-bye schedule featuring some of the best teams in football, a win in Carolina is essential to not only keep their season alive but for some people in Minnesota to keep their jobs. There are three big matchups in this game that will be key in how this game plays out, for better or for worse.

While the 2021 Minnesota Vikings season has felt eerily similar to the 2020 season thus far, one big difference between the two has been Minnesota’s revitalized pass-rush. This was to be expected with the return of Danielle Hunter and Everson Griffen on the outside and the trio of Michael Pierce, Dalvin Tomlinson, and Sheldon Richardson on the inside. Hunter and Griffen both rank in the top-12 among edge defenders in Pro Football Focus’s Pass Rushing Productivity metric, and Pierce is 7th in the same metric for interior defenders. While Pierce will not play against Carolina, Tomlinson has the 10th highest pass-rushing grade among DTs in the NFL thus far.

Brandon Thorn, well-known for his fantastic work focused mostly on offensive and defensive line play, created a “High-Quality sack” metric, which Griffen leads the NFL in thus far with Hunter not far behind in 4th. All of these stats showing the Vikings’ improved pass-rush is a very welcome sight to what Minnesota fans witnessed in 2020.

Expect this trend of stellar pass-rushing to continue in Week 6, as Carolina’s pass-blocking ranks at the bottom of the league in PFF’s pass-blocking grade and ESPN’s pass-block win rate. In a way, the Panthers’ offensive line mimics the Vikings’ situation. Their right tackle Taylor Moton is a very good player similar to Brian O’Neill, and he is the only player on their line who has a pass-blocking grade above 51.9. That is”¦ not good.

To make that better for Vikings fans, Sam Darnold struggles under pressure as well. This all adds up to a hopeful recipe for success for Mike Zimmer’s defense. With the Minnesota offense struggling lately, leaning on the defense to make big plays will be important. Six of Darnold’s eight Turnover Worthy Plays this season have come while under pressure, per PFF. Former Viking Pat Elflein is eligible to return off of the IR but likely will not. If he is indeed activated, that would make for a fun storyline within this matchup as well.

After looking quite potent through three games, Minnesota’s offense, specifically the passing game, has not looked the same lately. A team with Kirk Cousins playing well throwing the ball to Justin Jefferson and Adam Thielen should score more than 26 points over a two-game span. Full stop, no excuses. That does not get any easier when they visit a resilient defense in Carolina.

The Panthers defense has allowed the second-lowest EPA per play on passing plays so far this year. They own the fifth-best team coverage grade in the NFL, the only PFF team metric where they rank in the top ten. While Carolina does not boast any elite players in their secondary, they are a good example of how important it is to have a defense where no one is a big liability. They are a young and talented defense and got younger with the acquisition of CJ Henderson, who is questionable for Sunday’s game. The Panthers also got a bit older trading for Stephon Gilmore, but he is on the Physically Unable to Perform list and will not be active vs Minnesota.

The football “nerds” will often say defensive success is a product of the offenses you face, and this could be the case with Carolina so far this year. Through five weeks, they have gotten the benefit of playing against the Jets, Saints, Texans, and Eagles, none of which are impressive passing teams. The one talented passing team they did play, Dallas, lit them up to the tune of 36 points in Week 4. Minnesota’s play over the last few weeks does not give them the benefit of the doubt in this regard, though. Will Kirk Cousins and the Vikings’ offense regain their mojo, or will they join the list of unimpressive offenses Carolina has faced?

There are going to be a lot of factors that play into that question. The first being whether or not the Vikings continue to beat themselves before the opposing defense even does anything.

This self-scouting for Minnesota’s offensive coaches should start with their play-calling on second and long. According to Vikings reporter Courtney Cronin on Matthew Coller’s Purple Insider podcast, Minnesota has run the ball 29 times this year on second and long. They have converted 4 of those plays into first downs. While a play can be successful without resulting in a first down, a rate shy of 14% on converting such plays into first downs is abysmal no matter how you dress it up. If the Vikings want to set themselves up for success, putting themselves in desirable down and distances would be a good place to start.

Offensive Coordinator Klint Kubiak says Kirk Cousins’ freedom to change the offense at the line of scrimmage has “evolved.” Cousins taking the reins at the line and changing plays could result in calling his own number on more pass plays. At least many Vikings fans will hope that to be the case. Kirk also needs to trust his elite playmakers more often. Against a solid coverage team like Carolina, Jefferson and Thielen might not have a lot of separation at times. Cousins needs to remember he has two receivers who are fantastic at contested catches.

In plays such as the one above against Detroit, Jefferson may have tight coverage on him but that does not mean Cousins can’t throw it. On that play he does, and Jefferson rewards him with one of the biggest plays the offense had all game. Cousins will always let it rip accurately when he has time, and his receiver has separation. It is those times where there is not much separation and Cousins panics and either checks it down or pulls the ball down for a sack where he needs to flip the switch. This matchup between Cousins, Jefferson, Thielen, and company against Donte Jackson, AJ Bouye, Jeremy Chinn, and company will likely decide whether the Vikings season still has hope or not. Also, after having a sizeable impact in the first two games, KJ Osborn has been quiet lately. If he once again balls out in Carolina, when do we discuss the narrative of Osborn performing much better on the road than at home? People are asking.

The Carolina Panthers boast what might be the most under-the-radar pair of pass-rushers in the NFL in Brian Burns and Haason Reddick. Burns is in his third season as a former first-round pick and was a popular choice as a dark horse Defensive Player of the Year candidate coming into the season after putting up 57 pressures and an 86.7 pass-rushing grade last season. Reddick posted similar numbers, 56 pressures and an 82.6 pass-rushing grade, last year for Arizona. Reddick is tied for the league lead in sacks so far with eight.

Neither finds themselves in the top-30 in terms of pressures thus far in 2021, but when they do get to the QB, they get there fast. Burns has pressured the QB 17 times to Reddick’s 15. Getting 8 sacks on 15 pressures means Reddick’s current sack rate is unbelievably unsustainable, but that does not mean he will not keep it up against Minnesota. Carolina flips what side Burns and Reddick line up on at will, with both of them splitting almost half of their snaps on the left and ride side of the defensive line. That means that the Vikings’ combination of Brian O’Neill on the right side and Rashod Hill/Christian Darrisaw on the left will all have to be ready to face both pass-rushers.

Brian O’Neill received his lucrative contract extension in September and has continued being worth every penny, posting the lowest pressure percentage allowed among all offensive tackles on plays without RPOs, screens, and play-action. The Minnesota left side, however, is a much larger question mark. First-round rookie Christian Darrisaw made his debut against Detroit, rotating in for a few drives for Rashod Hill. Darrisaw is clearly the better option moving forward, but all signs point to them both seeing time against the Panthers. Mike Zimmer and the Vikings have long been stubborn when it comes to replacing struggling offensive linemen, so the fact that Darrisaw saw the field is a big first step.

Rashod Hill has spent a lot of time getting comfortable with how it feels to lay on the turf at US Bank Stadium the last two weeks, with the above clip being a prime example of that. While Darrisaw will surely have his “welcome to the NFL” moments, Hill has simply gotten ran over far too many times for him to fend off the rookie for much longer.

Darrisaw got beat a few times against Detroit as well, but none of his mistakes were of the “wreck the play before it even has a chance” variety that Hill’s have been. His performance against Haason Reddick and Brian Burns could catapult him to the full-time starter if he fends them off well enough. O’Neill will hold up on the right side, it will be up to the combination of Hill and Darrisaw to keep Cousins’ blindside clean on Sunday. While Carolina moves both their rushers from side to side, will they move their strongest pass-rusher to the right side of the defense to face Minnesota’s weaker tackle? And if so, that leads to the question, who does Carolina consider to be their premier pass-rusher? While Reddick leads in sacks, I would say Burns is still the more talented of the two. These little games within the game play a vital role in the final outcome, and this specific one will be of utmost importance as it pertains to keeping Kirk Cousins upright and able to whip the ball around to his playmakers. If they are unable to do that, prepare for another dreadful performance out of the Minnesota offense.

Deep Fantasy Football Stashes For Week 6
A new era in Baton Rouge: Who should replace Ed Orgeron at LSU?