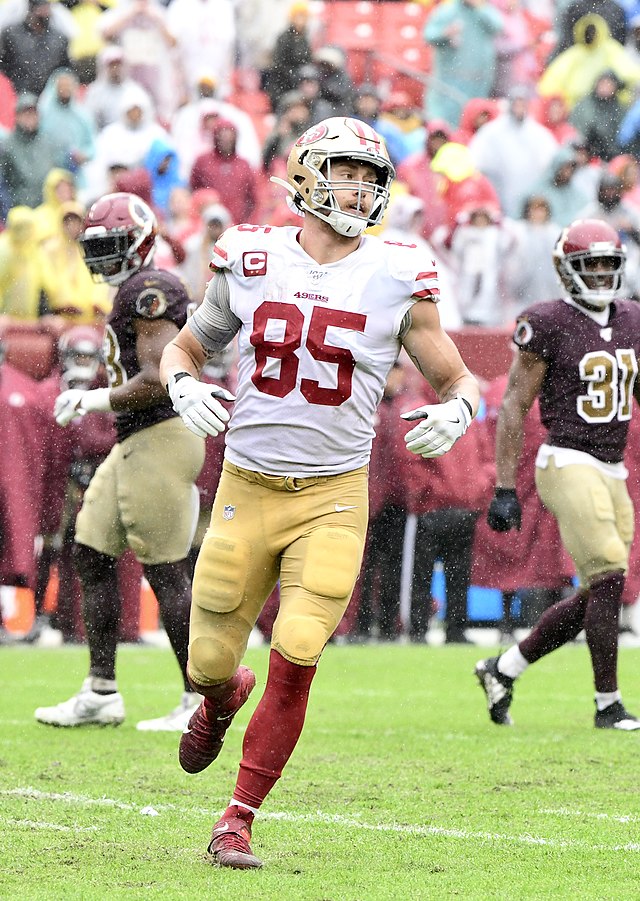 Will John Lynch be trading George Kittle away soon?

The San Francisco 49ers were gifted a talented profile and energetic persona in George Kittle at pick 146 in the 2017 NFL draft. Kittle has made three Pro Bowls and garnered one All-Pro spot in his career thus far. Impressively, the Tarzan-like character managed to be PFF’s second-best player in 2019 and 2020 combined.

Nonetheless, Kittle is still human and the 28-year-old may be at his peak or beginning a slow decline in 2022. There have been bold opinions about the idea of trading away Kittle by NFL analysts. For example, Grant Cohen from 49ers Nation suggests that SF should trade Kittle ASAP.

It could be wise for Lynch to accept an offer from a desperate team in this trigger-happy trade world. Although, the 49ers need to decide if they feel close to playing on a special day in February with Kittle in the future. Furthermore, the 49ers have to ponder if they can replace Kittle’s production (and potentially Deebo Samuel’s ability) in the likely Trey Lance-led offensive attack.

With that enunciated, I’m going to outline the pros and cons of SF trading away Kittle. In the end, I will reach a verdict on the idea of Shanny shipping away Kittle.

Cons of trading away Kittle

Kittle is 28 years old, but it would be ideal if he’s dominant for 4-6 more seasons and potentially a caliber- starting TE for several more seasons. Travis Kelce was elite at 32 years old and Gronk was a stud at 31 years old for much of last season. The Saints legend Jimmy Graham also had 8 touchdowns at age 34 in 2020.

It will be a challenge for the 49ers to hand the keys to Trey Lance AND lose George Kittle. The SF TE had 94 targets and 71 receptions from the TE spot last season. Kittle may not have been effective in the recent playoff gauntlet, but he was instrumental in his team’s ability in the season to ultimately snag a miraculous playoff berth.

It may honestly be sexy for SF to exchange Kittle for many early draft picks from an overly aggressive team, but they definitely shouldn’t send Kittle out the door if Deebo Samuel flees the Bay Area. I believe the 49ers are retooling their squad with a switch from Jimmy G to Lance, regardless of Samuel’s situation. If Samuel leaves, the 49ers should keep the ship afloat and allow the creative Lynch to obtain 1-2 playmakers in space for the 49ers HC wiz.

Pros of trading away Kittle

There have been many blockbuster trades (Tyreek Hill, Davante Adams, Khalil Mack) in the NFL this offseason. It may seem like the 49ers could be in awe of the ability to possess many early draft picks. Most importantly, the 49ers could potentially have multiple younger weapons via a new draft pick to build around Lance for a very long time. The 49ers could also not place all of their marbles in the Trey Lance experiment and use one of the potential early picks in a Kittle trade to select a QB.

The 49ers recently restructured Kittle’s contract, but he is still on a hefty long-term contract that he signed in August of 2020. The 49ers could REALLY use some moolah to keep the 2021 All-Pro Deebo Samuel in their offense right now. The clock on a Nick Bosa extension is also ticking fast.

I believe the idea of SF trading away Kittle is more logical than the lack of rumors surrounding the thought. Although, I believe it’s too risky for the 49ers current team to lose Kittle in the short term (and long-term). He has been a huge part of their success in 2019 and 2021. I am also not convinced that his injury concerns are real, as he’s played in 14+ games in four out of his five seasons.

The 49ers had a movie-like entrance to the playoffs with “Samuel and Kittle” last season. The 49ers should really find a way to keep Samuel and slightly young Kittle, so they can help Lance be successful for many more seasons.