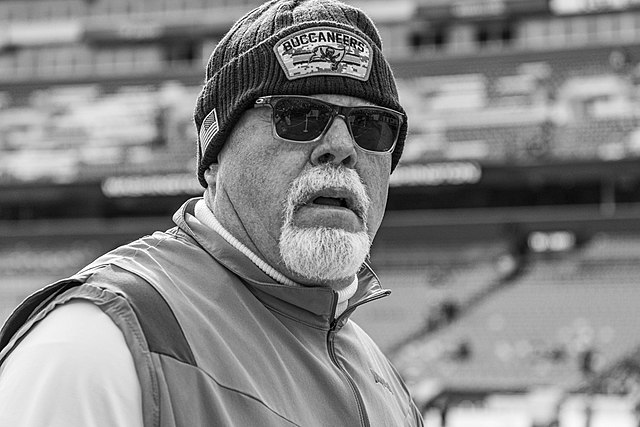 Is Bruce Arians bound to be in the Hall of Fame?

In one of the surprise moves in an already topsy-turvy offseason, Buccaneers head coach Bruce Arians left his post behind, ending a coaching career that spanned 40-plus years throughout the NFL and college football.

Arians is most notably known for his time as the Bucs head coach, as he joined forces with Tom Brady to win the franchise’s second Super Bowl title following the 2020 season. He also guided the Arizona Cardinals from 2013-17, taking the team to the NFC Championship Game in 2015.

But some things people may have forgotten are his prior stints as an assistant coach. He was able to elevate some of the most talented arms in league history outside of Brady — Peyton Manning, Ben Roethlisberger, Andrew Luck, and Carson Palmer.

His NFL head-coaching life may have been short-lived, but so was the late great John Madden’s. But the big question now; is Arians a Hall of Famer? It’s something that needs to be discussed.

For starters, we should discuss Arians’ Super Bowl rings. Yes, he did claim one as head coach of the Bucs, but he also contributed to the Pittsburgh Steelers’ most recent title teams (2005, 2008) as a wide receiver coach and offensive coordinator, respectively.

But his biggest selling point may be his work with some of the game’s best QBs. Arians worked with Manning as his QBs coach in his first three seasons in the NFL (1998-2000). After a shaky rookie year, the future Hall of Famer had two Pro Bowl seasons with Arians, which also included two second-team All-Pro nods, as Manning led the NFL in TD passes (33) and passing yards (4,413).

Wondering what Manning did after Arians left for Cleveland? He regressed a bit, amassing 42 interceptions over the next two seasons, and going 16-17 record-wise (including the playoffs).

While as OC of the Browns, Arians did not have a ton of offensive talent during his stint there (2001-03), but he was a major factor in the franchise getting back to the playoffs for the first time in since its return to the NFL in 1999. The Browns’ loss to the Steelers in the 2002 Wild Card round would prove to be Cleveland’s lone postseason appearance until 2020.

Arians would then join the division-rival Steelers, as they went 15-1 in their first season with him on the staff. The team ultimately lost in the AFC Championship game to the eventual-Super Bowl Champion New England Patriots, but Pittsburgh would get it back with the Super Bowl XL win over the Seattle Seahawks.

As a WRs coach in Pittsburgh, Arians mentored Hines Ward to a Pro Bowl season in ’04, as well young future Super Bowl heroes in Plaxico Burress and Santonio Holmes. And once he took over as OC, that’s when the Steelers began to see the emergence of Roethlisberger into superstar territory.

In 2007, Arians’ first season as Steelers OC, Big Ben had his first 30-TD pass season. While working with Arians (2007-11), the Miami of Ohio product was named the ’07 Comeback Player of the Year and earned his first two career Pro Bowl nods.

After leaving Pittsburgh to go back to Indy, the 2012 season may be Arians next-best achievement on his resume. With head coach Chuck Pagano having to step away from the team after four games due to his cancer treatments, Arians nobly stepped in as interim HC, lifting the Colts to a 9-3 record at the helm (11-5 overall) and a berth in the Wild Card round.

Arians was acknowledged as the 2012 Associated Press COY due to his contribution’s in Pagano’s absence.

Just like he did so many years prior for Manning, Arians was a key figure in Luck landing his first Pro Bowl selection and setting several NFL and Colts records for a rookie QB.

Then as head coach with the Cardinals, Arians had a record of at .500 or better in four of his five seasons with the team and won his second Coach of the Year honors there (2014). Arizona had two playoff berths under Arians and in 2016 won its first division title since going back-to-back in 2008 and 2009. The loss to the Carolina Panthers in the 2015 NFC Championship game was only the second conference championship appearance for the team since moving to AZ in 1995, and was just the fourth time in team history that the Cardinals made back-to-back postseason appearances.

BA’s 50 wins in AZ (including the postseason) are the most in franchise history.

Arians’ run in Arizona was notably coupled with the revival of Palmer’s career. The former No. 1 overall pick had a 91.1 passer rating and averaged 279.7 passing yards while working with BA. But the 2015 was Palmer’s finest — the Heisman Trophy winner led the league with a 76.4 QBR, had a 104.6 passer rating, 35 TD passes, 11 INTs, and 4,671 passing yards in leading the Cardinals to a 13-3 record.

Once BA got to Tampa, he had another reclamation project with Jameis Winston, and although people will remember that the fellow former Heisman winner threw for a league-high 30 INTs, he also led the league with 5,109 passing yards and 33 TDs. That cleared the way for Brady to come in, as he won his seventh ring with the team in his first year there, before claiming the Bucs’ first divisional title since 2007.

And even with the great Brady under center, Arians took him to heights he’s never been. The GOAT had never had back-to-back 40-TD pass seasons in his career before coming to Tampa and he also set a new career-high for passing yards last season (5,316).

Outside of that, BA also was the oldest HC in NFL history to win the Super Bowl (68). He also has the highest winning percentage in Buccaneers history (.651), nine seasons as an HC/OC where he had top-10 scoring offenses, and another seven with top-10 total offenses.

Billick may not get into the Hall due to such a short time working in the NFL, but Johnson did just get inducted in 2020, which was most likely due to his two Super Bowl wins in 1992 and 1993.

The biggest drawback to BA’s head coaching career would be the length of time. He only had eight seasons as a head coach, which would be on the lower end for an HOF coach. But that should not be the end all be all for Arians. Other Super Bowl era coaches have made it to the Hall after short tenures.

Madden, Johnson, Vince Lombardi, and Bill Walsh all made it in with 10 or fewer seasons as an HC. And although each may have a certain piece of their respective resumes that elevates them above Arians’, BA’s achievements aren’t that far behind.

Three Super Bowl wins in total, two COY awards, and holding respective wins and winning percentage records with two franchises that have losing records all-time in the NFL. When you stack it all up, Arians’ case is stronger than you’d realize.

The Bucs have already announced BA will be inducted into their Ring of Honor this coming season. And that honor could be coming at any moment for the Cards to do the same. So do those add to his already stellar resume? Yes.

But do they make him a sure-fire Hall of Famer? That’s up for debate. All I know is, if I had a vote, I’d have no problem sending Arians on his way to Canton.