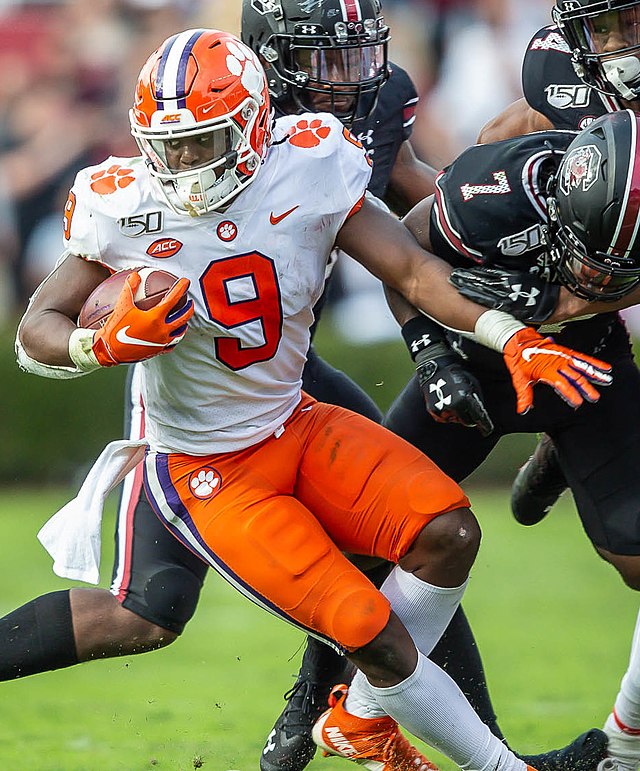 Few things in life move at the speed of fantasy football. Player values skyrocket, or tank, based on the mere editing of a player’s social media bio. In fact, I’m old enough to remember when some considered Travis Etienne the best running back in his class. Fast forward to the present, and fellow blue-chip sophomore running backs Najee Harris and Javonte Williams is making waves in both their NFL careers as well as in dynasty rankings as they charge ahead of a slew of veterans in most people’s ranks.

One can’t say the same about Etienne, who remains an enigmatic RB13 on the KTC rankings. Slotting in just after Nick Chubb and before Saquan Barkley and Alvin Kamara. Does his current outlook justify his consensus value?

Etienne had a good college profile, with ample production both on the ground and through the air. Drafted in the first round to pair with his college QB Trevor Lawrence, expectations for him were high in 2021 before his Lisfranc injury in August 2021. There is still cause for optimism, as Etienne’s rehab has gone well by all accounts, and he is projected to be present in the team’s offseason workout programs, buoying hopes that he’ll be available for the start of training camp. That timetable is reasonable, given an average recovery period of about 30 weeks for athletes who suffered a Lisfranc injury. It should be noted that it is not uncommon for recovery to stretch over a year for your typical patient.

A 30-week recovery period would put us at about March 15th from the date of his injury. On The Players Podcast, Etienne mentioned that he had started running back in February, “My foot is doing much better,” Etienne said. “Really just got back into the gym for the first time and I’m squatting for the first time this past week. So that’s been good and I’ve been running for a while now. I’m kind of getting to that 80% to 85% range.”

As encouraging as his recovery has been, it’s worth noting that the research regarding player performance following a Lisfranc injury seems less elucidating. Scientists tracked athletes following surgical treatment for Lisfranc injuries and noted that on average athletes subjectively attained 87% of their previous “level of play” following their recovery”¦with the emphasis in that sentence on the term subjective.

In an unrelated study, scientists tracked the performance of NFL players following Lisfranc injuries, determining that players return to play at a median of 11 months from injury. They also found that the performance of both offensive and defensive players decreased following injury, but that decrease was not statistically significant, i.e. it may have been a chance finding an artifact of the sample data. In this study, they defined performance based on the “power rating” metric, defined as (touchdowns x 6)+(total yards/10), and the defensive power rating as (total tackles)+(total sacks x 2)+(total interceptions x 2). They then compared player performance pre/post-injury. The use of the “power rating” metric to gauge player performance has a precedent in comparing the performance of players post ACL injury. My concern with this type of analysis is that year-over-year variation in most of those metrics is already poor. Stats like touchdowns, interceptions, and sacks are simply not “sticky” year over year. That they found no statistically significant decrease in production is demonstrative of that reality.

So, while so many remain optimistic about Etienne’s dynasty outlook, it would be prudent to temper expectations, especially for the upcoming season. His long-term outlook may not be as good as it was when he was drafted 25th overall in 2021, though there’s little reason to believe that he won’t be active at the start of the season. Additionally, with teammate James Robinson rehabilitating his own very serious injury, with recovery from Achilles injury far less predictable than Lisfranc, the workload for Etienne appears likely to be ample. Additionally, with RBs Rachaad White and Brian Robinson Jr. available when the Jags picked twice in the 3rd round, the team opted to take an LB and OL instead, tipping their hand regarding their thoughts about their running back room.

There is certainly still a chance that Etienne will return to his pre-injury form, but there’s also a chance we see a diminished performance from the sophomore running back.

I would recommend taking a dart throw at incoming rookie Snoop Conner in the later rounds of drafts, as low acquisition cost RBs in muddled backfields tend to be a good bet. That being said, if you can get a first-round pick for Etienne with perhaps a late-pick kicker, I’d take that trade today. I’d also be willing to trade Etienne for any number of vets going near Etienne in drafts, because it’s hard for me to believe that some fraction of Etienne will produce superior numbers than those vets, especially in 2022. Keep your ear to the ground, if the Jags add a veteran to their backfield in the months leading up to the start of training camp he’d be well worth rostering in most formats.

Which free agents should the Buccaneers bring back?
3 cornerback free agent targets for the Giants right now