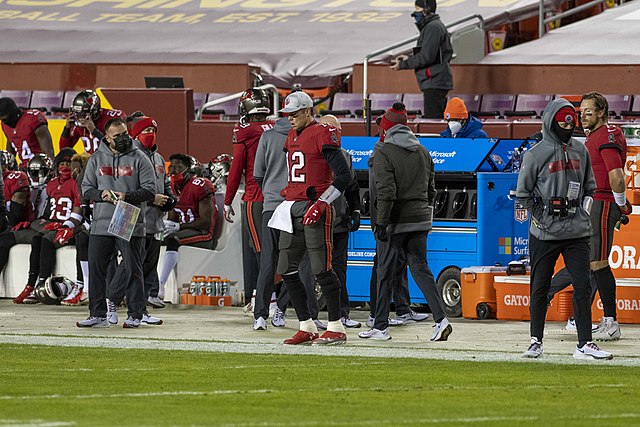 The Tampa Bay Buccaneers quarterback Tom Brady’s success at age 44 could be due to his unmatched TB12 method or perhaps we’re living in a simulation (or it could be a combination of the two points). Brady threw for the most passing yards and passing touchdowns last season, but the other greek god-like QB in Green Bay won MVP. Well, I’m going to untwine three reasons why Brady could win MVP in his potential last stand.

The GOAT may not have Rob Gronkowski next season, but he did retain Chris Godwin and Leonard Fournette (aka Playoff Lenny). Godwin was actually on pace for his best season in 2021: 98 receptions and 1,103 yds in 14 games last season. It’s also spectacular that the Bucs scooped up former Falcons WR Russell Gage, who was named Rich Eisen’s top under-the-radar signing this off-season. Per Fantasy Pros, Brady has been impressed with Gage in OTAs thus far. Scotty Miller should noticeably bounce back from his 38 yds in 9 games a season ago, as well.

Brady had excellent team success and unearthly stats last season, but his offense dropped a goose egg against the Saints in their second battle. His 0-point effort against Who Dat Nation was the first time he was shut out since 2006! His lack of anything at home against the Saints was a factor in why Rodgers won MVP. With that said, I would be absolutely shocked if Brady didn’t have a monster plan and chip on his shoulder against the Saints in 2022. He may lose a game (or potential two games), but I highly doubt he will be close to being shut out against Cameron Jordan and Chauncey Gardner Johnson for the second straight season.

It may be a popular narrative that the Davante Adams-less offense will hurt Aaron Rodgers’s chances of winning MVP for his third straight season while helping every QB have a better chance to win MVP. Yet, it’s quite true that Brady should feel more ecstatic than nearly every QB that Rodgers will Tae — as Brady has been chasing A-Rod for the MVP crown over the past two seasons. Brady also plays Rodgers at home on September 25th and I really expect the Bucs QB to improve his MVP chances after I project the Brady bunch to win.