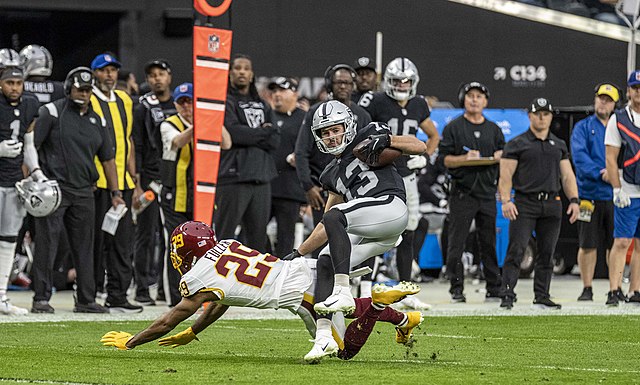 What is Renfrow’s dynasty outlook in 2022 and beyond?

One of 2021’s biggest surprises was the Hunter Renfrow breakout. With struggling receivers on the outside and TE Darren Waller battling through injuries, Renfrow stepped up and became Derek Carr‘s favorite option. Despite the top thirteen finish at receiver, Renfrow is currently viewed as outside the top 36 options. Is that low ranking justified or is he a strong buy-low option?

One big change, which isn’t being accounted for enough in his value, is the hiring of Josh McDaniels. The Patriots’ system, where he came from, has had prolific slot receivers for years. If Renfrow continues in the same mold as Wes Welker and Julian Edelman, he’s vastly underrated and should be viewed as a WR2 type.

Looking back through Patriot seasons, it’s hard to find apples-to-apples comparisons. Unfortunately, Randy Moss, Welker, and Rob Gronkowski all played together, as Gronkowski joined the year Moss left. The fewest targets a healthy Patriots slot WR saw since 2010 is 86, to Danny Amendola when playing with Brandin Cooks and Gronkowski. So that is the absolute floor, health permitting.

That undersells the targets though, which routinely hit 130+ in those seasons. The Patriots were aware of Amendola succumbing to injuries often and minimized his usage to protect him for the playoffs, especially with Julian Edelman already out. I believe a better comparison is out there though. Let’s look at the 2013 season. In 2013, the Patriots had four primary targets: Edelman (134 targets), Gronkowski (131), Brandon LaFell (119), and Shane Vereen (77).

I brought up the difficulty in finding a Patriot comparison because the Raiders no longer have just Renfrow and Waller, they made a huge offseason addition. Davante Adams is now in Las Vegas, reunited with his Fresno St running mate in Carr, and is clearly the team’s new alpha. Adams has seen at least 127 targets in each of the last four seasons, and that low was in only 12 games.

It’s unlikely the Raiders have two players still mentioned in the above tweet after the 2022 season. Which is bad news for Renfrow because those targets aren’t coming from Adams. What it does mean is that Renfrow is likely to see a lot less coverage, as teams are going to have to roll safeties towards Adams and Waller. So I’m expecting more efficiency in 2022, though less scoring.

I want to circle back now to the 2013 Patriots. While this is the closest comparison, I still think it’s flawed. For one, while Josh Jacobs has shown an ability to catch passes before, I don’t think he’ll be used that way (again). McDaniels prefers sharing the load, so likely a combination of Jacobs, Kenyan Drake, and possibly Zamir White split backfield touches.

With less short-area target competition, this bodes well for Renfrow. Waller and Adams are both vertical threats to challenge defenses. So were Gronkowski and Moss. Renfrow is likely to be the open-off-the-line guy Carr targets to move the chains and when he sees a blitz or free rusher coming. Which is likely to be a lot with all the pass rushing in the AFC West.

That’s to say nothing of the current offensive line situation. It’s gross and unlikely to improve drastically. The way McDaniels calls plays to combat this? Get it out quick to the open slot WR. It’s why Edelman saw so many targets later in his career. I expect similar from Renfrow this year.

Darren Waller and Davante Adams both turn 30 in the season, while Renfrow will only hit 27. This gives him his prime years with Carr as his QB and likely a slot-friendly scheme for at least his next two years. He’s shown adept at collecting targets, including the red zone. His role can grow too, as both Waller and Adams have injury histories that only get worse with age.

In any PPR leagues, I think I’m comfortable with Renfrow as my WR2 or 3, likely paired with a higher variance player like a Terry McLaurin or Drake London. He’ll never be highly sought after, but is going to be a steady contributor to whoever manages him. As a contender, he’s someone I absolutely want on my team. I think now is the time to buy before people see him pop in the system.