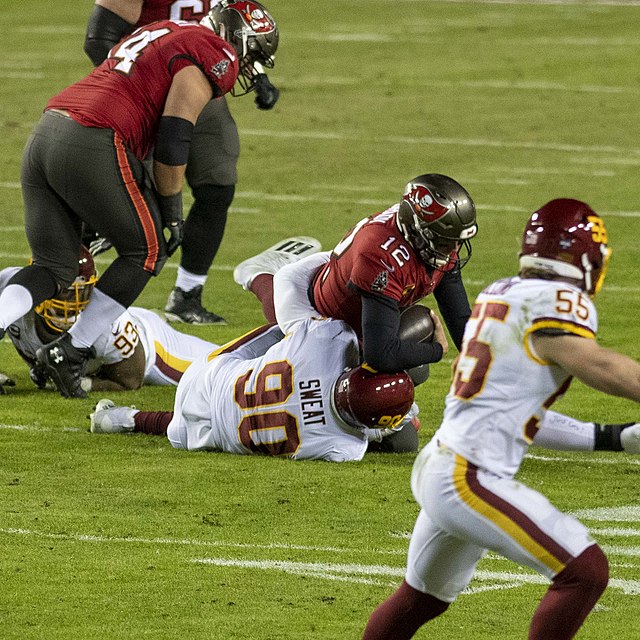 Will the Buccaneers bounce back?

The Tampa Bay Buccaneers have endured a torrid start to the 2022 NFL season.

Not one person, whether they are members of the media or just your regular fan down the street, would have predicted the Buccaneers to start the season 3-5.

Shock losses to the Pittsburgh Steelers and Carolina Panthers, who both had one win prior to beating the Buccaneers, were then followed by a loss at home to the Baltimore Ravens.

This is the first time in Tom Brady’s career that he has lost three games in a row. With a division that appears wide open, there is every chance that the Buccaneers end up making the playoffs and all is well again. However, there is also the possibility that a team that has won a Super Bowl and narrowly lost in the Divisional Round during the last season, could miss the playoffs entirely this season. Here are three reasons why this could happen.

It does not get any easier for Brady and the Bucs when looking at their schedule. Their next game is against current Super Bowl champions, the Los Angeles Rams. Whilst they are also coming off the back of a loss and have a 3-4 record, this is not exactly a game that head coach Todd Bowles will want even with an extra few days’ rest.

After the Rams game, they face the 5-3 Seattle Seahawks in the first ever regular season game to be played in Germany. They will not want to play a team in form, let alone in a neutral venue with jetlag.

This is not an easy ride, so expect the Bucs to be challenged right the way until the end.

With four teams ahead of them in the race for the Wildcard spots, and two of those with three more wins, the Bucs better turn things around quickly, otherwise they will be watching the playoffs from their living rooms.

Brady’s personal life has been the subject of much media coverage of late, with Brady addressing the rumours on Instagram, confirming their divorce.

This is bound to have played some part in Brady’s slump in form.

Lack Of Protection And Receiving Help

Mike Evans has still been excellent as ever, if you exclude the dropped catch against the Panthers, ranked as having the eighth-most receiving yards (577) and Godwin (368) has done well considering the comeback from injury. Running back Leonard Fournette (273) is their next best receiver, which shows the issues at hand.

Russell Gage and Julio Jones both came in during the offseason in attempts to give Brady as much help as possible, but Gage has just 231 receiving yards and Jones has been non-existent with just 97 yards from 11 targets and six receptions. Cole Beasley came and went in the space of a couple of weeks.

Whilst Brady is second in the league for passing yards, he is tied for 17th in passing touchdowns. This shows the struggles Brady and the team have had in getting it down the end zone. According to FantasyPros.com, Brady is eighth in the league for passing yards in the red zone and eleventh for passing touchdowns. This also shows the issues Brady has had, a lot like Aaron Rodgers this season, with receiver help.

Brady has already been sacked thirteen times this year, which means he is projected to finish the season with just under 30 sacks. This would be the eighth-highest total of his career. To put it in perspective, he was sacked ten times at this stage in 2020, and twelve times at this point last season. The loss of Ali Marpet to retirement has been huge, even with the addition of former teammate Shaq Mason. Ryan Jenson’s injury has had a big impact also, with Robert Hainsey and Luke Goeseke seemingly failing to deliver in their absence.

There is still plenty of time to go, but the Buccaneers certainly have cause for concern at this present time.