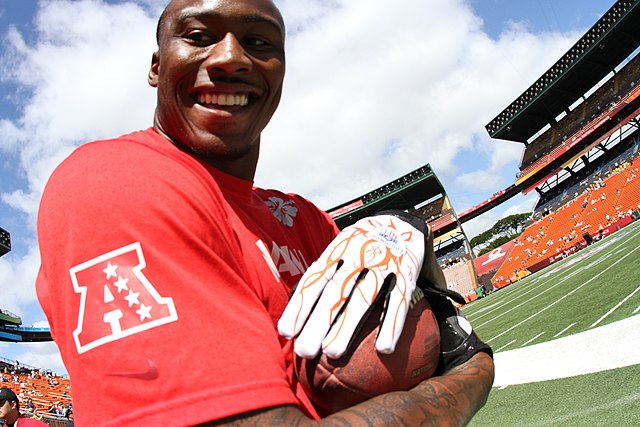 Will Brandon Marshall be cast into Canton?

Brandon Marshall was one of the most dependable wide receivers in the NFL for a good portion of his 13-year career. He had at least 1,000 receiving yards for seven consecutive seasons between 2007 and 2013. Arguably his best season, though, was in 2015 for the New York Jets, when he led the NFL in receiving touchdowns (14) and scrimmage yards per touch (13.8). But is he a Hall of Famer? Was he that much better than other wide receivers of his generation to warrant that honor?

Marshall put in a number of great seasons with the Denver Broncos, the Miami Dolphins, and the Chicago Bears. As good as he was throughout these seasons, he never played a single down in the postseason. Nevertheless, he made six Pro Bowl appearances and was a first-team All-Pro selection in 2012. His resumé resembles that of… A.J. Green.

Like Marshall, Green had a period of time in which he was one of the NFL’s best wide receivers. But where is the line drawn between the Hall of Fame and the imaginable Hall of Very Good? The difference is in how much a player exhibits control over the league.

Number of Seasons Leading the League in Receiving Yards:

Number of Seasons Leading the League in Receiving Touchdowns:

This is the separation. Marshall and Green in one grouping; Johnson, Fitzgerald, and Owens in another. You also have other factors here separating these groups. Johnson is arguably the most physically dominant wide receiver in NFL history. Fitzgerald is one of the greatest postseason performers in NFL history. Owens’s explosiveness is the stuff of legend. The best thing you can say about Marshall is that he performed at a high level for a long period of time. There’s nothing about him that elevates his profile to the positioning of these other all-time great wide receivers.

There has to be a threshold for electing members of the Pro Football Hall of Fame. Allowing a player like Brandon Marshall in, as good and consistent as he was, makes the requirements for making the Hall of Fame less stringent than they should be. There’s nothing wrong with being elected to the imaginary Hall of Very Good.