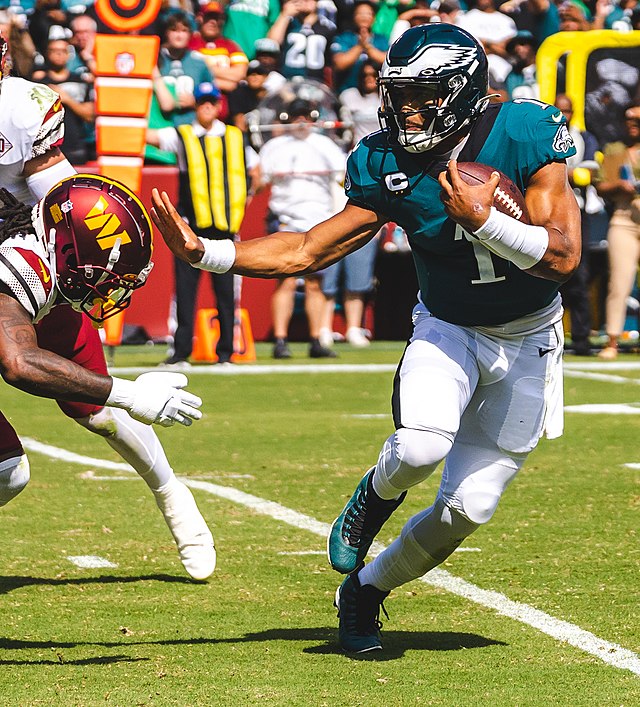 The Philadelphia Eagles are currently the best team in the NFC, sporting a perfect 8-0 record. They’re currently ahead of their rival Dallas Cowboys and New York Giants in the NFC East, which seems to have returned to the status it had attained some years ago as the NFL’s best division. Despite the Eagles’ favorability in the outlook of both their division and the conference, they’ll be taking advantage of a top-ten draft pick in the 2023 NFL Draft.

The Eagles have a stout roster at the moment, but there are a couple of areas in which they could stand to shore up resources. It isn’t overly apparent where the weaknesses on this team are, but even the best teams can find improvement somewhere. With six picks in the first seven rounds, here’s a direction they could go.

Kelee Ringo is arguably the most versatile defensive back in the 2023 NFL Draft. His ability to play the entire field in pass coverage as a corner makes him a heavily sought-after prize. The flaws he has exhibited in the past have been largely corrected in 2022, like his ability to be a bit overly aggressive in coverage.

For Ringo, having played in the SEC could go a long way for his outlook in the NFL. The SEC is the closest college football gets to NFL-level competition, and that’s a plus for his draft outlook. His tutelage with the Eagles and Darius Slay, one of the NFL’s best corners, only improves this outlook.

Alabama’s mill of running backs to the NFL continues with Jahmyr Gibbs who, while not a defining offensive element a la Derrick Henry, will make an excellent addition to an offensive with a number of other key pieces already in place. His playmaking ability is what has made Alabama’s offense even more difficult to disrupt.

An Eagles offense with Jalen Hurts, Myles Sanders, A.J. Brown, DeVonta Smith, and Dallas Goedert is loaded and the addition of someone like Gibbs seems a plus in every respect. Even if Sanders goes to another team, Gibbs could be ushered in nicely.

More SEC here with Rashad Torrence II out of Florida. The safety has a great ability to recognize routs and has top-notch close-in abilities. He also has abilities when being used in a blitz package. All of this makes him an addition for NFL teams to get excited about, and he has enough quickness to be able to make an instant impact.

The Eagles have a lot of depth in their defensive backfield with Slay and C.J. Gardner-Johnson, allowing for a player like Torrence II to be able to grow into his own at the NFL level. He’ll need to grow a bit, literally, as his size is more like a corner at the moment than a safety.

Jaquelin Roy has played a major role in the recent resurgence of the LSU program. The 6’4”, 297-pound interior defensive lineman has excellent quickness for his size and is able to utilize that quickness to create disruption, particularly as a pass rusher, which stands out as his best asset at the current moment.

Neither Brandon Graham nor Fletcher Cox are as young as they used to be, so the Eagles could stand to benefit immediately as well as long term from a player like Roy. His addition could take some pressure of these veteran pieces and tighten up a defensive line rotation.

Cameron Latu isn’t one of the most recognizable pieces of the Alabama offense, but he is one its most reliable. Intermediate and short routes are his specialty, and he has some of the strongest hands in the ’23 draft. He’s one of the most solid tight end options in the draft because there’s very little risk with his profile.

Dallas Goedert has become one of the best tight ends in the NFL for the Eagles, but it’s always worth it to add depth to your skill positions. Latu, like Goedert, has been dependable for his team and can be deceptive with his ability to show out.

6’6”, 315-pound offensive tackle Zak Zinter from Michigan struggles with pass protection, but he has major upside in the running game. He hasn’t played a ton of football either, which makes him a tad worrisome, and the reason why he comes up back in the 7th round. But he isn’t going to be a player who comes in to start immediately, so his upside gets him a spot.

The Eagles’ offensive line, led by Jason Kelce, has proven to be a strength for the team in 2022. Bringing in a guy like Zinter means they’ll be able to get him the kind of experience he’ll need to adapt to the NFL level and could lead to him being a dependable piece at some point.