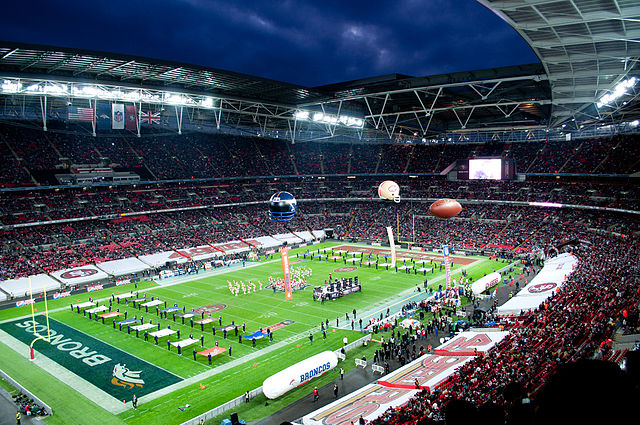 NFL in the UK is on the rise

The NFL international games for 2022 were announced last week. With there now being three UK games rather than four, and Germany now hosting a game, has the sport in the UK’s interest peaked?

For years, there has been discussion about a team potentially being relocated to London from the States. From 2014 to 2019, there were at least three games a season held in England’s capital, sometimes even four before the Coronavirus pandemic hit in 2020.

2022 hosts three games as the Minnesota Vikings face the New Orleans Saints, the Jacksonville Jaguars make their annual trip hosting Russell Wilson and the Denver Broncos, and the Green Bay Packers finally play across the pond to host the New York Giants.

The popularity of American Football in the UK has grown massively in the UK since the first regular-season game in 2007 between the Giants and Miami Dolphins. We are now at the point of no turning back and it is hard to see the London games ever ending. However, what has died down is the talk of a London team.

The popularity of American Football in the UK will always remain, with the London games becoming very quick to sell out and in extremely high demand. It is hard to see where the sport goes from here in Britain.

Germany hosting its first regular-season game this year represents a new country for the NFL to target but this interest is not good for the UK in the long term.

Plenty of British fans is vocal about their desire for there not to be a team that relocates to London. On paper, this sounds great, 8 games a season in London. However, the NFL players certainly would not enjoy the amount of traveling, and fans of the sport in the UK fans often state the point of why there needs to be a London team when they already have a team they support. Some may decide to adopt a second team or change allegiances, but most would stay loyal to the team they grew up following.

What’s next for American Football in the UK? If the sport is to grow even further, then an NFL team in London is the most logical step towards doing this.

Other ways include hosting the Draft or Super Bowl in London, something that possibly appeals more to both the league and the British fans than a London team.

Super Bowls tend to go to cities that have NFL stadiums, and the NFL Draft often follows the same path. NFL commissioner Roger Goodell has always talked about expanding the sport globally and this could be the way to further increase its popularity.

London would be a great host city for the NFL Draft and there would be no need to worry about travel as players often spend the entire week in the host city of a Super Bowl.  Otherwise, there is a real fear of the momentum of American Football in the UK stagnating.