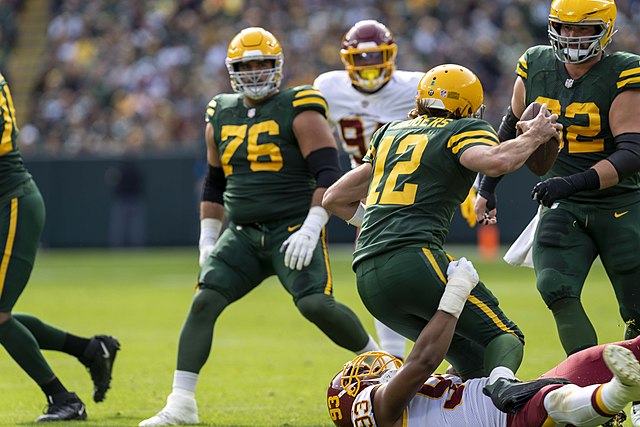 What is the biggest obstacle for the Packers?

The Green Bay Packers are aiming for another Super Bowl win with the ageless warrior in Aaron Rodgers. A-Rod and his band of misfits will surely face a different mountain in 2022 than any previous season. The Packers will not have Davante Adams and it will be more difficult for Rodgers to “own the Bears” with Justin Fields leading CHI out of the tunnel. Nonetheless, the Packers will aim to be the top seed in the NFC for the third straight season.

With that enunciated, I’m going to untwine the biggest challenges that will attempt to break the Packers spirit in 2022. Let’s begin.

I really believe the loss of Tae will haunt the Packers passing attack next season. Adams has arguably been the NFL’s most indispensable WR in the NFL over the past couple of seasons. A vital question arises after the exit from Adams: how quickly can Christian Watson develop into a 1,000+ yard WR?

I would also still like to see the Packers ink Will Fuller or OBJ, so they have a few quality WRs and Rodgers would always have favorable match-ups with his wideouts. The Pack has an underrated talent in Sammy Watkins, but they are also relying on Watkins to stay healthy for most of 2022, which is a scary thought. I’d love to see the Pack ink a FA WR or trade for a superb WR, so their WR room is well-prepared to dazzle opponents like LAR, TB, and even NO.

The Packers may not have a Top 3 WR in Tae, but they will have an elite, healthy former Top 3 LT in David Bakhtiari. The Packers legendary LT missed 16 games last season and it’s clear the return of his presence will benefit the reigning NFC North champions. Furthermore, Elgton Jenkins (who missed 9 games last season) will be healthy and hungry moving forward. The 49ers stud pass rusher Nick Bosa had two sacks (including a strip-sack) against the Packers backup RT in the recent pivotal divisional round. The ultimate question is: can the Packers have their tackles return to their prior form?

The Packers cut ties with Za’Darius Smith this offseason, but they did add Quay Walker. The Packers new LB is off to a hot start, according to UGA Wire. The cheeseheads in the world will hope he can have a similar impact as the 2009 Clay Matthews in his first season. The 38-year-old Rodgers will hope that his young friends can help him win another Lombardi trophy in Titletown soon.