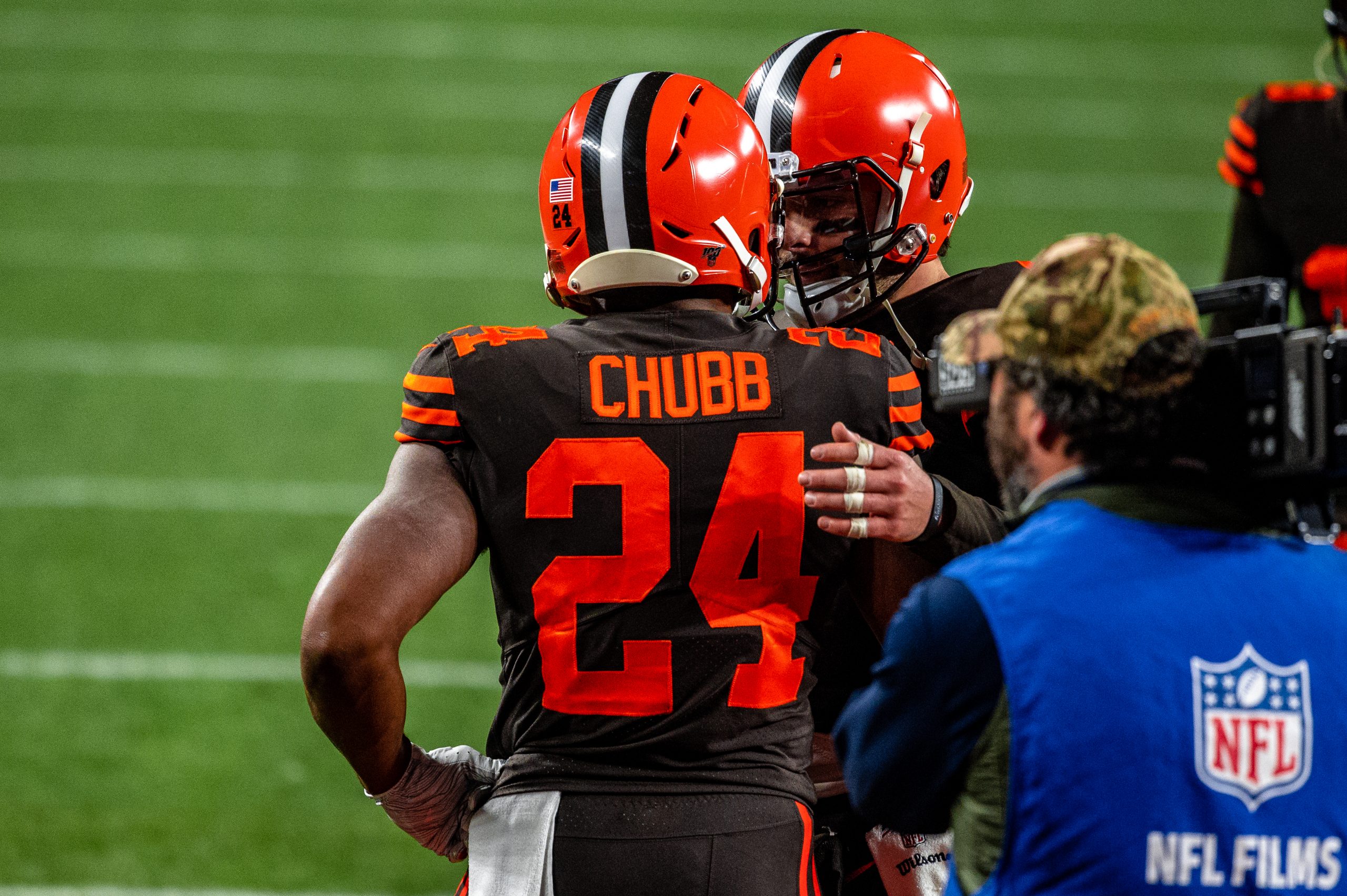 Which surprise franchises have a legit shot at winning the Super Bowl?

The NFL Draft came and went like a hurricane once again, with winners and losers grades flying in from every analyst in America. According to aggregate rankings, some of this year’s draft champions were teams like the Chicago Bears, Cleveland Browns, Los Angeles Chargers, New York Jets, and Miami Dolphins. Do any of these franchises actually have a shot at the Super Bowl though?

The short answer is yes. The Tampa Bay Buccaneers flipped the script in a single offseason, going from 7-9 to parade yachting through Tampa’s harbor. I know they signed the greatest quarterback the game has ever seen, but we’ve seen the NFL pull championship 180’s more often than any other sports league, and we could definitely see another dark horse Lombardi winner in February of 2022.

Based on both the NFL Draft and NFL Free Agency, here are four teams that could make the jump to SB Champs in what is now less than one calendar year away.

Now I know this one seems like a cop-out, because the Browns were pretty darn good last season, but they’re still not even favorites to win their division according to most oddsmakers right now. On FanDuel Sportsbook, Cleveland has +1700 odds to win the big game, behind the AFC North rival Baltimore Ravens at +1400. To me, the Browns might have had the top draft in football, and that’s after having a solid free agency and an 11-5 record in 2020.

General manager Andrew Berry made a splash just before the draft when he signed edge rusher Jadeveon Clowney. He had already bolstered the secondary in March, bringing in safety John Johnson III and corner Troy Hill (both formerly of the Los Angeles Rams), not to mention DT Malik Jackson and LB Anthony Walker elsewhere on the defense. This unit held Cleveland back in 2020, with a fluid consistency on the other side of the ball. After the signings they made, and the sleeper potential of draft picks like CB Greg Newsome II and LB Jeremiah Owusu-Koramoah (who never should have fallen out of the first round), it might be their strength just one year later.

The Brownies have been improving ever since Baker Mayfield took over at quarterback, and now this team is built to win it all. Top offensive line, ferocious pass rush, youthful secondary, blistering run game… oh, and star wide receiver Odell Beckham Jr. set to return from injury. Cleveland somehow faces a third-place schedule with a first-place roster, and I expect them to dominate.

A lot of people had the Denver Broncos as dark horses in 2020, but I promise you that I was not one of them. Even before the Courtland Sutton and Von Miller injuries (both healthy again), I thought Denver was a few missing pieces away from contention, but they may have solved a large chunk of that puzzle this offseason. They rank 11th on the aggregate draft boards, but I actually thought they deserved a higher grade. GM George Paton did a ton of things I liked this Spring, and it all started in the secondary with signings Kyle Fuller and Ronald Darby. It continued in the draft.

The tweet above doesn’t even include seventh round pick Kary Vincent Jr., who I thought was one of the top value picks of the entire draft. The LSU cornerback’s rank seemed to fall after he opted out in 2020, but he was very productive the season before when the Tigers won the College Football Playoff. The Broncos needed a deep secondary that could keep up with Patrick Mahomes and the Kansas City Chiefs, and this one can. Factor in Miller and Bradley Chubb finally pairing together off the edge, and this defense could have championship pedigree under Vic Fangio. The offense should be no slouch either, with a plethora of young weapons and the one tricky question being at quarterback (Drew Lock and Teddy Bridgewater set to compete).

P.S. Denver is currently the front-runner to trade for Aaron Rodgers… and that would only boost their +2400 Super Bowl odds.

The Dallas Cowboys may not have had the best draft grades in their entirety, but I thought they made a couple of very key selections early on, like middle linebacker Micah Parsons. After trading back for a couple of extra picks, the Boys drafted the top LB in the draft. Parsons is not only talented, he’s a leader with the ceiling of a Bobby Wagner type captain. They also filled their cornerback need in the second round (after missing out on Jaycee Horn and Patrick Surtain II), drafting Kelvin Joseph out of Kentucky (a solid prospect with elite speed), and UCLA defensive lineman Osa Odighizuwa is another intriguing prospect nabbed in the third.

Jerry Jones and Dallas went defense, defense, and more defense this draft after dishing out $240 million to Dak Prescott this offseason, and I loved the commitment here by Jones and company. This offense was spectacular before Prescott’s injury, averaging 32.6 points per game (PPG) during the five games he started. Dak plus a healthy offensive line should put the Cowboys back near the top of the league in efficiency, but this defense was in desperate need of reinforcements, allowing the fifth most PPG last season. When you consider how many injuries the franchise suffered in 2020, plus the improvements they’ve made this Spring, they are an easy 2021 dark horse in my eyes at +2800 odds.

I’m surprising myself with this one as I’ve been one of the biggest Matt Nagy-Ryan Pace haters the past few seasons, and most Bears fans would probably agree with me after the way this franchise has been run. That could all change with one draft decision, however, the trade-up for dual-threat quarterback Justin Fields. Now you are either a Fields believer or you aren’t ”” and I am ”” ranking the Ohio State product as my QB1 in 2021 (yes, that’s including Trevor Lawrence). As expected, NFL GM’s disagreed with us Fields supporters drafting Lawrence, Zach Wilson, and Trey Lance over him. To be fair, I like Wilson and Lawrence and think both could be successful, Lance I’m less sure about it.

Having the game-ready Fields as the Chicago QB1 instead of Andy Dalton makes all the difference in the world when evaluating this roster’s chances, but it wasn’t just the addition of Fields that changed my entire perspective on the Bears. Pace was drafting like his life depended on it (only because it totally did), and I have to admit that he struck gold under pressure. Left tackle Teven Jenkins was a steal in the second (a first round talent that will start after the release of Charles Leno). Then guard prospect Larry Borom and cornerback Thomas Graham Jr. were also some picks with some major potential to be had.

This once-great defense still flaunts playmakers like Khalil Mack, Roquan Smith, Robert Quinn and Eddie Jackson. The defensive line should also get back 2020 opt-out Eddie Goldman alongside Akiem Hicks. So long as they get something out of corners Desmond Trufant and Jaylon Johnson, this is a formidable unit again in 2021. On the offensive side, the Bears managed to hold onto Allen Robinson, while adding interesting weapons like Damien Williams, Damiere Byrd and Marquise Goodwin for Fields to get the ball to. There are still problems to solve, but Chicago took a major leap in the Super Bowl odds after draft night in my opinion, yet they still sit at +4800 odds on FanDuel. I may just have to take that bet.

Three Reasons Mac Jones Will Be the Patriots Starting Quarterback
Becky Hammon is on a mission
wpDiscuz
0
0
Would love your thoughts, please comment.x
()
x
| Reply