The 10 Most Controversial 2021 NFL Draft Prospects 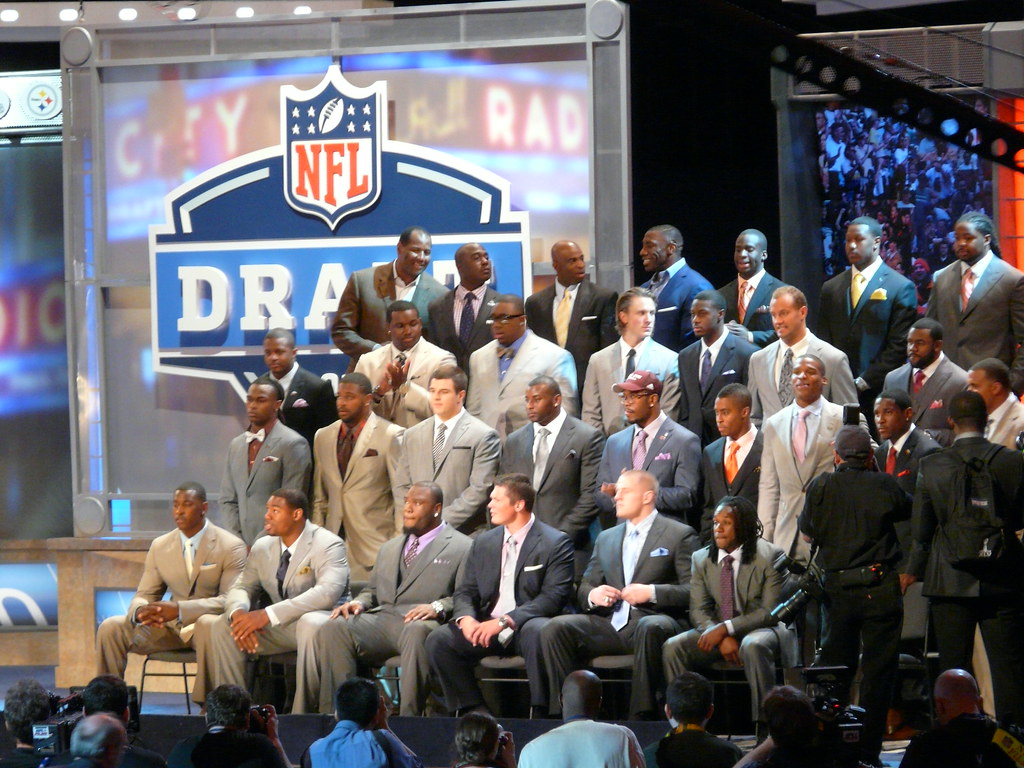 Every year a multitude of players are controversial for one reason or another. Sometimes a player is considered a 1st round talent, but then they return to college for another season and fall to day 3 in the subsequent NFL draft. other times a player is a premier NFL prospect but suffers a gruesome injury and as a result, teams are afraid to draft them. The most controversial of all is when an elite NFL prospect has damning off the field concerns. The 2021 NFL Draft is no different, and this list contains each of the previously listed scenarios. This article will count down the top ten most controversial players in this draft, and when you finish reading this article you can decide for yourself who you think is the most controversial of these ten.

Before the 2020 College Football season both Mel Kiper Jr. and Matt Miller considered Paulson Adebo a first-round talent in the 2021 NFL Draft. However, now most NFL Draft analysts expect that he will fall to day three of the NFL Draft. You’re probably wondering what caused such a dramatic fall from grace. Well for one, more scouts got ahold of Adebo’s game film against UCF and watched Adebo get torched by Gabriel Davis on multiple occasions. Secondly, and arguably, more importantly, COVID-19 hit and with the expectation that the Pac-12 wouldn’t have a season, Adebo decided to opt-out of a potential 2020 College Football season. This decision cost Adebo the opportunity to improve the weak points of his game as a defensive back. Opting out may have been the better decision for Adebo and his family, but it undoubtedly hurt his draft stock.

Like Adebo, Dylan Moses was considered by Matt Miller and others to be a potential first-round pick before the 2020 College Football Season. Now, most people would agree that he will not be drafted in the first or second round of the 2021 NFL Draft. Some don’t think he will get drafted until the 4th round or later. Why is this? Because Moses seemingly has never fully recovered from the ACL injury that caused him to miss the entire 2019 college football season. Moses himself even admitted that he was still experiencing pain in his knee throughout the 2020 college football season. Injury concerns and a drop in productivity have led to his descent down draft boards.

In 2019 Shaun Wade played solely as a nickel cornerback, with Jeff Okudah and Damon Arnette serving as the outside corners at Ohio State. He played so well in the slot, that before the 2020 NFL season he was considered a first-round talent. Those opinions quickly changed after analysts watched Wade attempt to play outside cornerback during the 2020 College Football season. The final nail in the coffin was when Wade attempted and miserably failed to cover DeVonta Smith in the National Championship game. many now believe Wade will need to play solely in the slot/and or transition to playing safety to be successful at the NFL. As a result, most believe he will hear his name called no earlier than the third round of the 2021 NFL Draft.

Some consider Andre Cisco to be the best safety in the 2021 NFL Draft and his college statistics do a pretty good job of backing that up. In 2018, as a freshman at Syracuse, Cisco recorded 7 interceptions. He continued to impress in 2019, recording 5 interceptions in 9 games played. Cisco is hands down the best ball-hawking safety in the 2021 NFL Draft. Sadly in 2020 Cisco only managed to play in two games, missing the other nine to injury. In three seasons at Syracuse Cisco has missed 14 games due to injury. His most recent injury was an ACL tear, suffered early in the 2020 season. As a result, any hope of Andre Cisco getting drafted in the first round has vanished into thin air. Now Cisco can only hope that a team will still take him in the second round, despite his injury concerns.

Rousseau is one of the most fascinating 2021 NFL prospects. He only played one season of college football. He has also only played DE for a short period of time, as he played wide receiver and safety in high school. What Rousseau did in that 2019 season though, had many believing he would be a first-round pick. Some even considered him a top-10 pick in the 2021 NFL Draft. Time, however, has not been in his favor, as most no longer view him as a first-round talent. Many believe the 15.5 sacks he racked up as a 19-year-old redshirt freshman should be credited to the defensive system run by the University of Miami, rather than Rousseau himself. Rousseau lost the opportunity to prove his doubters wrong though, when he opted out of the 2020 college football season, due to Covid-19 concerns. In time, we will discover whether Rousseau is a diamond in the rough, or simply fool’s gold. For now, we must simply wait to see what happens.

Caleb Farley was considered by many to be the best cornerback in the 2021 NFL Draft for most of the 2021 draft cycle, but recently the report of a microdiscectomy has caused his stock to plummet. Back injuries are always concerning and needing to undergo a back procedure months before the NFL Draft is going to scare a lot of people. As a result, Farley may be the 3rd or 4th cornerback taken in the 2021 NFL Draft. It’s even possible that Farley falls outside the first round altogether and isn’t selected until day 2 of the NFL Draft.

Trey Lance might be the most unique quarterback prospect in NFL History. He only played one season of college football, which was at the D1-AA Level. As a result, he’s never in his lifetime, faced the speed and athleticism that almost every other NFL quarterback prospect has faced at this phase in their career. Lance, however, did dominate the competition he faced at the D1-AA level. In 2019 he threw for 2,786 yards 28 touchdowns and 0 interceptions with a 180.6 passer rating. It’s worth noting though, that he only averaged 174 yards passing per game during that 2019 season. Lance isn’t just elite at throwing the football, he’s also excellent at running the ball. In that same 2019 season, he ran for 1100 yards and 14 touchdowns on 169 rushing attempts. Trey Lance will likely be drafted with a top 5 selection in the 2021 NFL Draft. If he does get drafted in the top five, it will likely be the greatest risk-reward scenario in NFL history. Lance could be a complete bust. He could become a dynamic weapon who dominates the NFL for years to come. Any true fan of football should be excited to watch his career and see what becomes of him.

Devonta Smith is one of the best wide receivers in the 2021 NFL Draft class. Some even consider him the top wide receiver in the 2021 NFL Draft. However, concerns about his weight, and specifically his weight in correlation to his height, have raised concerns around the NFL. At 6’1” tall and only 170lbs, Smith will be one of the skinniest players in the NFL. This begs the question; will he be prone to injuries in the NFL? In the NFL availability is the best ability, and if Smith’s slight frame causes him to be at a higher risk for injury than other players, it could lead to his downfall. If Devonta Smith can stay healthy, he could become one of the next dominant receivers in the NFL. He has received comparisons to NFL greats Chad Johnson (aka Chad Ochocinco) and Marvin Harrison. If Smith does stay healthy throughout his career, he could be seen wearing a gold Jacket in front of a crowd of thousands in Canton, Ohio about 25 years from now.

Michael McCorkle Jones is one of the most controversial football players in the 2021 NFL Draft. Some believe he will get drafted 3rd overall to the San Francisco 49ers this year, others don’t believe that he should be drafted within the first 32 selections. Some claim that Jones doesn’t have the arm strength or the mobility to be an elite quarterback in the NFL. For what it’s worth, Mac Jones was the most dominant quarterback in college football last season. He had a season eerily similar to that of Joe Burrow in 2019. In 2020 he led the NCAA in completions (311), completion percentage (77.4%), passing yards (4,500), yards per passing attempt (11.2), and passer rating (203.4). He also had the second-most touchdown passes in college football with 41. Additionally, he was the 4th most accurate deep ball passer among draft-eligible quarterbacks, ahead of both Justin Fields and Trey Lance. The controversy around Mac Jones doesn’t end there though, when he was 19 years old, he was arrested and charged with a DUI. He was also charged with improper ID by a minor. To spell it out plainly, he was drinking and driving while also possessing a fake ID. Clearly, Jones made some very poor decisions early on in his career at Alabama. That incident occurred almost three and a half years ago, so hopefully, Jones has matured and learned from the poor choices he made in his past. NFL teams, however, cannot have that same hopefulness, they will need to have done a throughout background check on Jones to ensure they feel comfortable making him their franchise quarterback come draft day.

Lastly, and certainly the most controversial on this list, is linebacker Micah Parsons. On the field, there are no concerns with Parsons. He is widely regarded as the top linebacker prospect in the 2021 NFL Draft, and many also consider him a top 10 talent. Off the field, however, is where the concerns begin. Former Penn State defensive back Isaiah Humphries filed a hazing lawsuit against Penn State University, Head Coach James Franklin, and former teammate Damion Barber. In the lawsuit, Humphries alleges that he was subject to hazing and harassment from four players, on an average of 2-3 times per week for nine consecutive months. Those four players were Damion Barber, Micah Parsons, Yetur Gross-Matos, and Jesse Luketa. In the Lawsuit, Humphries claims that on March 26th, 2018, Parsons attempted to strangle him and that he had to pull out a knife, which forced Parsons to release his grip on Humphries neck. When Humphries reported this information to his head coach, James Franklin’s response was “you should have just gotten your ass beat and not pulled a knife.” Additionally, Humphries claims that Barber, Parsons, and Gross-Matos did the following to him and certain other players:

All of this can be read in full detail here. If true, these are all damning accusations for Micah Parsons. I would assume quite a few teams have already removed Micah Parsons from their big board completely. Obviously, the Carolina Panthers won’t be one of those teams, as they were comfortable drafting Yetur Gross-Matos last year. Any NFL teams even remotely interested in drafting Micah Parsons will need to have completed an extremely thorough background check on him, otherwise, they would be making a foolish decision. Micah Parsons the player might be an elite football player, but Micah Parsons the player, might be un-draftable. Hazing is a cancerous culture and can quickly lead to an inhospitable environment for players. If an NFL team hopes to bring a winning culture to their franchise, they should avoid drafting a player as volatile as Parsons if the accusations are true.

This concludes my article on the top 10 most controversial players in the 2021 NFL Draft. If you think there’s anyone that should have been included in this article but wasn’t, let me know in the comments section.

Best Destinations For Todd Gurley
Why The Falcons Need to Trade Back
wpDiscuz
0
0
Would love your thoughts, please comment.x
()
x
| Reply