Who is the best WR trade target for the Baltimore Ravens?

The Baltimore Ravens don’t have the sexiest wide receiver group without Hollywood Brown heading into the 2022 season. If Rashod Bateman can prove to be a quality WR1 leading up to the season, LJ should still have modest passing production w/ him and TE Mark Andrews. Nonetheless, Jackson could certainly benefit from the arrival of a proven and electric wideout. Hence, I’m going to untwine 5 WR trade targets for the Baltimore Ravens right now.

The explosive wideout Curtis Samuel recorded 851 yds in 2020 and then fell off the end of the earth last season (27 receiving yds in five games). Samuel is certainly a unique athlete, but he clearly doesn’t jell well in the Washington offense. Samuel is still 25 years old and he can be a dynamite profile for many years to come in the right scheme. It would be quite intriguing to see Samuel involved in the Ravens diverse offense, to say the least.

Denzel Mims is certainly a polarizing wideout that sits among a talented and crowded WR room. Mims stands behind Elijah Moore, Corey Davis, Garrett Wilson, and Braxton Berrios at this point in time. Mims actually had a strong opening day of mini-camp – as reported by Brian Costello of the New York Post. Yet, it may be quite difficult for Mims to come close to unleashing his full potential in the Big Apple. The Giants should be aggressive to acquire Mim’s talent.

The Saints completely changed their WR position this off-season — as they brought in Jarvis Landry and Chris Olave. They also retained the gifted Michael Thomas. They still have the exceptional KR/WR Deonte Harris and the speed-demon Marquez Callaway. With that enunciated, the Saints may be tempted to ship away the WR4/WR5 Callaway — after he ousted 698 yds and 6 TDs last season. The Ravens lost the juice from Brown, so they could help heal the wound by acquiring the young, deep-threat in Callaway.

The Ravens should make a sneaky move by acquiring Sterling Shepard — who has slowly fallen out of the Giants WR picture in the past two seasons. He will be a FA in 2023, so the GMEN may wish to ship him out. The 29-year-old wideout that wouldn’t cost the house (to say the least) could be a fine slot weapon for LJ for 2-3 more seasons. 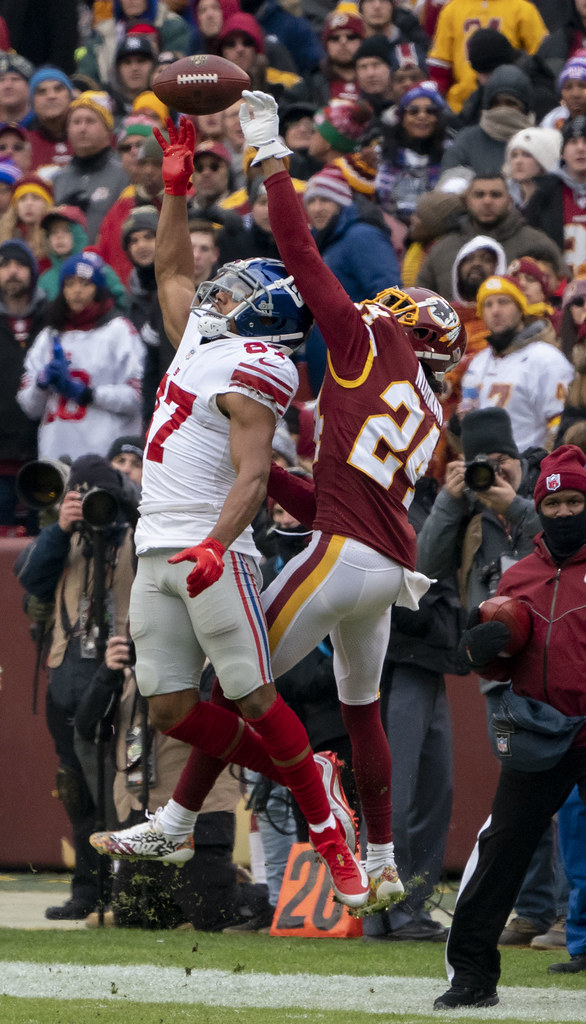 What is the WR and TE outlook for New York?

The Giants wide receivers were nothing short of underwhelming this year. The top 4 options on the depth chart all missed games with various ailments, and even when on the field were often invisible. Pricey free agent signing Kenny Golladay was often ignored and barely cracked 500 receiving yards. Sterling Shepard could not stay on the field and eventually tore his Achilles, knocking him out for the season. Darius Slayton suffered from the drops and missed five games with various ailments. Rookie Kadarius Toney certainly flashed a tantalizing skillset but missed seven games with several different injuries. Shepard is likely to be a cut, with a high salary and bad injury history. Slayton certainly took a big step, making this a position of more need than it appears.

Options in the Draft

This is a solid draft for wide receivers, with plenty of talent stretching through the middle rounds. Some names to watch include David Bell, John Metchie, Jahan Dotson, and Jalen Tolbert. Metchie is a true speedster, with the ability to stretch the field and keep defenses honest, a similar profile to Jaylen Waddle. Bell and Tolbert are excellent route runners, and can use double moves to fake out defenders. Dotson can do a little bit of everything, and has really good hands, something the Giants could use, as their receiving corps has been dealing with drops for a couple years now

This is an avenue I can almost guarantee the Giants will not take unless it is a flyer. They have no cap space to spend big money on another wide receiver after forking over $18M a year for Golladay. A shame, as this year’s free-agent class, is deep, with names like Mike Williams, Chris Godwin, Davante Adams, and Allen Robinson. The same goes for the trade market. The Giants need every single one of their many drafts picks to plug holes in more important spots on the team.

Outside of a mid to late draft pick, do not expect the Giants to invest any resources in the wide receiver position. The offseason goal will be to make sure Golladay, Toney, and Slayton return healthy and in shape for next season. The hope is that a new head coach and offensive coordinator will push the offense in the right direction.

This is a position that is going to be very interesting to watch heading into the offseason. Evan Engram, former first-round draft pick in 2017, is going to be a free agent. Kyle Rudolph is likely going to be cut, as he has a high salary with minimal usage. The Giants will have to decide if they want to bring Engram back, or look elsewhere for a solution.

Options in the Draft

There will be a few options in the draft if the Giants choose to invest a draft pick at the tight end position. The best of the bunch is Jalen Wydermyer out of Texas A&M. Wydermyer has been a consistent producer for three straight seasons despite having a different quarterback each year. A huge physical player, Wydermyer stands at 6’5″, and weighs in at 265 pounds. As you can see from the clip above, he possesses an amazing catch radius, and his size makes him a premier red-zone threat. This would make him a reliable target for Daniel Jones, or whichever QB is at the helm for New York. Other options that could be drafted include Isaiah Likely, Trey McBride, and Cade Otton.

This is an avenue unlikely to be explored, simply because the Giants have no cap space to work with. However, if they find ways to free up some room, David Njoku is a player to keep an eye on. Drafted in the same class as Evan Engram, he possesses a blend of speed and power that is tough to beat. His opportunities were limited in a run-first offense in Cleveland, but a new team could give him a better opportunity. Other free-agent tight ends include Zach Ertz, Gerald Everett, and Dalton Schultz.

If I had to guess, I would think the Giants will attempt to bring back Engram on a cheap one or two-year deal. If that is unsuccessful, they will shop in the bargain bin, and draft a tight end in the middle rounds of the draft. Daniel Jones will need a reliable 3rd down/red-zone target with good hands, and there are some quality choices if the Giants know where to look.