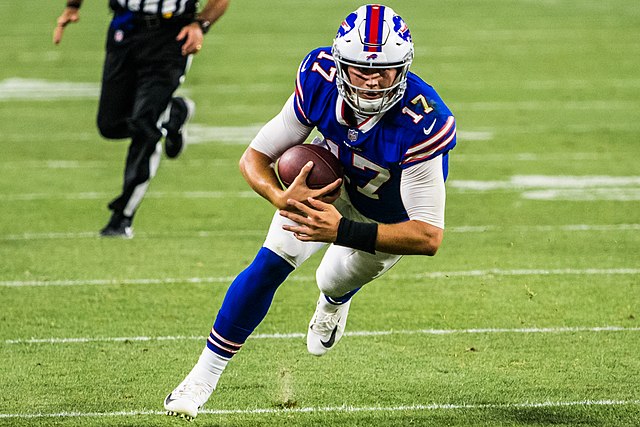 What are the Bills expectations right now?

The Buffalo Bills have fallen just short of the Super Bowl for the last 3 years and have been very active in Free Agency to try and get them there this season. They have tried to fill all their holes so they could go into the Draft picking the best player available at their turns. They have been particularly busy in the trenches and are one of the favourites in the AFC to reach the Super Bowl this season. However, they have one glaring hole which could end up being their achilles heel, which we will get to shortly.

We have to start with the big money splash on DE Von Miller. He has a 6 year $120 million $51.5 million guaranteed contract. Last season he had a PFF grade of 88.7, had 9 sacks, 17 QB hits, 19 tackles for loss and 33 solo tackles. His Run Defense grade was 85.9 and after 2013 he has finished every season with at least 8 sacks. With Gregg Rousseau, Jerry Hughes and Shaq Lawson opposite him the Bills have substantially improved their Edge Room. Jerry Hughes’s PFF pass-rush grade last season was 81.1. The only question mark over Miller is his age, at 33, but the Bills are in win-now mode and this is an excellent addition to their roster.

The Bills have added depth to their interior Defensive Line with Tim Settle, DaQuan Jones and Jordan Phillips brought in to join Ed Oliver. PFF said of Settle that he was one of the best under-the-radar signings of Free Agency with a pass-rush grade of 72+ for the last two seasons. Over the last 4 seasons, he’s played 63 games, had 54 tackles, and got 7 sacks. He’s certainly a solid piece, and DaQuan Jones, Jordan Phillips are similar players being more pass rushers than run blockers. The Bills Defense was the No 1 Defense in the NFL last season and led the League in:

The Bills have outstanding depth at Safety and haven’t felt the need to address this Room in Free Agency with Jordan Poyer and Micah Hyde their starting Safeties. Poyer had a PFF coverage grade of 89.2 last season and Hyde’s was 88.3 with an overall grade of 82.0. Even the backups are quality players with Damar Hamlin receiving an overall grade of 82.4. This is a very strong defensive unit with one glaring hole- the Corner Back Room.  The Bills have lost their No 2 CB for the last 4 seasons, Levi Wallace, to the Steelers. In that time he recorded 219 tackles and 6 interceptions. What’s more their No 1 CB Tre’Davious White is returning from an ACL injury. This leaves Dane Jackson and Cam Lewis currently as their CB Room. I’m presuming the Bills have a plan of action for this hole unless they’re confident these two players are going to have a breakout season.

On to the Offensive side of the ball and the Bills have brought in/back some targets for Josh Allen to hit. They have 2 Slot Wide Receivers in Isaiah McKenzie and Jamison Crowder who replace Cole Beasley. McKenzie was re-signed on a 2 year $44 million deal and had a very good 2020 season with a PFF receiving grade of 78.8. Jamison Crowder is an ex-Bills player and has been brought back for depth on a 1 year contract. Stefon Diggs is their WR1 and a very good player being 6th in the League last season for receiving touchdowns and 7th in the League for receiving yards (1,225). Is Emmanuel Sanders going to retire? No concerns the Bills have Gabriel Davis ready to fill the void who, according to the football analytics outlet, was the second best 2nd year WR against man coverage.

This depth meant the Bills hit the TE market in Free Agency and brought in TE OJ Howard on a 1 year contract worth $3.5 million. He will pair with Dawson Knox who got 9 touchdowns last season which was first amongst Tight Ends and 15th in receiving yards with 587. Howard has 3x 400+ yard seasons so will strengthen this Room. The Bills have been active in Free Agency and secured two Running Backs in Duke Johnson and Taiwan Jones, both on 1 year deals to support Devin Singletary. I really like the signing of Johnson who had 4.6 yards/carry last season which was 14th in the League. In Cleveland, over 4 seasons he caught 235 passes for 2,170 yards and 8 touchdowns with 4.3 yards per carry. He can run and he can catch, my only surprise is that he didn’t receive a slightly longer contract. Taiwan Jones graded well in 2019, but he is 34, and re-signed with the Bills so they’re clearly comfortable with him. Duke Johnson is the receiving threat to Singletary’s running threat.

The Offensive Line was targeted with the Bills adding Guard Rodger Saffold and re-signing Ryan Bates and Ike Boettger. Bates received a 4-year deal so will be a starting Guard and is a good run blocker with a PFF grade of 74.5 last season, and Boettger was a good run blocker too grading 72.2 before tearing his achilles. Saffold graded 76.1 at run blocking so Duke and Devin should have a lot of success running behind these Guards, LT Dion Dawkins, C Mitch Morse, and RT Spencer Brown. Finally, the Bills have added 2 Quarterbacks in Matt Barkley and Case Keenum who replace Mitch Trubisky who joined the Steelers to be their No 1 QB.

The Bills are an all-around very strong team with only one weakness. Bills fans will be expecting another deep run into the postseason, and with Hill leaving the Chiefs, a visit to the AFC Championship game is firmly in their sights. Will the Bengals repeat their success of last season or will teams scheme successfully against Ja’Marr Chase? Will the Browns get Watson back early enough to pick up speed? Will the Broncos under Wilson be a significant threat now? The AFC is loaded with talented teams and the Bills march to the Championship gets tougher each year, but they have the talent and the coaching staff and might well be the favourites in 2022.