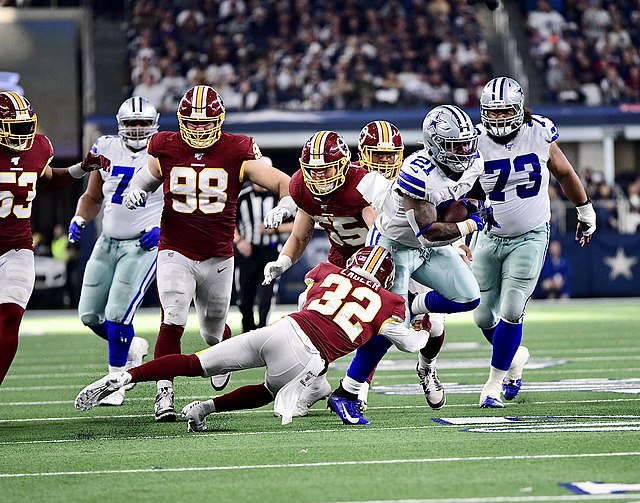 The Dallas Cowboys have reaped the benefits from the former Ohio State legend Ezekiel Elliott for six seasons. Zeke had a career-high 322 rushing attempts in his rookie season, which led to 1,631 rushing yards, 15 rushing touchdowns, and All-Pro honors.

Since the eclipse of his rookie season, Zeke has unleashed three 1,000+ rushing yd seasons and two seasons of 10+ rushing touchdowns. The Cowboys legend has also been fed in numerous ways, as he’s averaged 1,605 all-purpose yards in each season. It’s obvious that Jerry Jones showed his faith in Zeke by making him the highest-paid NFL RB on Sept. 4th of 2019.

It’s true that Zeke has unveiled one of the best six-season spans from the RB spot, but how much tread could actually be left on his tires? Elliott averaged 65.3 rushing YPG in 2020, which was a career-low mark at that point in time. His 58.9 rushing YPG mark in 2021 broke his 2020 career-low rushing number and it’s clear that his tank is losing gas. Meanwhile, Tony Pollard unveiled 719 rushing yards and averaged 5.5 yards per carry. Pollard is hurting fantasy owners of Zeke, to say the least.

Zeke is currently the 22nd-ranked RB in dynasty RB rankings (PPR) on Fantasy Pros. The Cowboys RB1 that has more career touches than any other RB starter shouldn’t return to being an overly impressive RB for the Cowboys, but I believe the 26-year-old can be a 1,000+ rushing-yard RB for one or two seasons.

I wouldn’t be thrilled about the bruised RB behind the Cowboys struggling offensive line. The Cowboys offensive line is far from the OL unit that propelled Zeke or really helped Demarco Murray. Most importantly, the 24-year-old Pollard is coming off a career season and he could realistically be the future of the Cowboys backfield after one or two seasons. Zeke is a dying breed, so it’s time to celebrate the remaining magic by pardoning him if possible and enjoying his limited highlights on TV.