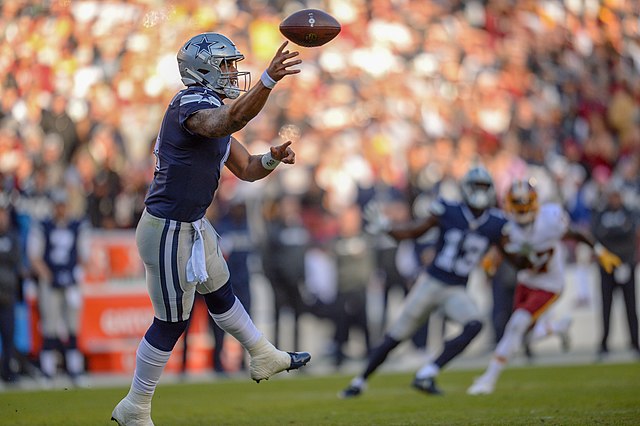 Dak Prescott is a darkhorse candidate in 2022

The Dallas Cowboys quarterback Dak Prescott may have lost to San Francisco in the playoffs, but I believe there is astronomical potential for Dak and his offense. Dak has stated, “We definitely haven’t taken a step back”. I believe Prescott has better than the 1-20 odds that NFL.com gives him at winning MVP next season (behind the likes of Russell Wilson, Justin Herbert, and Joe Burrow). With that said, I’m going to untwine three reasons why Prescott is an underrated MVP candidate.

The Cowboys were confident when they delivered Amari Cooper out of Dallas. The young TE Dalton Schultz will aspire to thrive with the empty chair that Cooper left behind. Schultz had 89 targets in 2020, a career-high 104 targets and I expect him to be a more popular target next season. After Michael Gallup missed countless games in 2021, Schultz was a major factor. The 25-year-old TE should have a bigger piece of the pie in the Cooper-less offense moving forward.

The Cowboys legendary LT Tyron Smith missed 14 games in 2020 and the Cowboys were happy to have a healthy, talented LT in 2021. Smith missed six games last season, but he was still able to make the Pro Bowl last season. I love that the Boys have held onto the expensive, injury-riddled veteran LT in hopes that Prescott can take bigger steps in the near future.

The reigning Super Bowl champions (Los Angeles Rams) have the most difficult schedule, while the Boys have the easiest schedule in the league (tied with Washington). Aaron Rodgers has preyed on the weak NFC North competition over his last two MVP seasons and it’s surely time for Prescott to feast on a very favorable 2022 schedule.