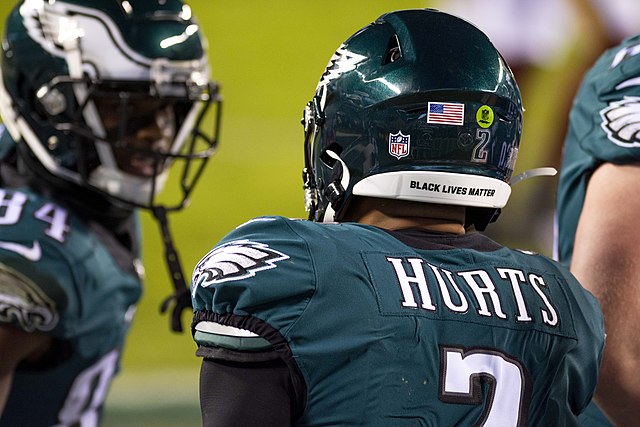 The Philadelphia Eagles have an Invincible (hi, Vince Papale) record 6-0. With that said, there is no reason that Philly should take their foot off the pedal in their stride to win a Lombardi trophy in 2022-2023. I believe they want to seek to add another face at WR for their up-and-coming QB Jalen Hurts. Hence, I’m going to untwine five potential WR trade options for the Philadelphia Eagles — as the November trade deadline mightily approaches (November 1st).

The Eagles don’t have the sexiest WR3, Quez Watkins (6 catches, 88 yards, and 1 TD), so it may be wise for them to shop for another face at wideout. Russell Gage was favored to be a threat in Tampa Bay until Julio Jones ruined his party. I still believe that Gage has a potent ceiling & that he can dominate his match-ups from the WR3 spot.

The speed-demon Mecole Hardman doesn’t quite fit in with Kansas City, but he could be a superb gift with Jalen Hurts. Hardman, who has clocked a 4.33 40-yard dash, is also 24 years old — which is a year younger than A.J. Brown. Hardman has 1,977 receiving yards and 14 TDs in his short career to this point.

The underperforming Kadarius Toney is a popular pick to be shipped away from his squad. After Toney collected 420 yards in 10 games last season (which was honestly underperforming), Toney has only registered two catches this season. The GMEN and the Eagles compete in the same divison, so the Giants may not be overly open to traded him to the Eagles, however.

After the Arizona Cardinals brought in Robbie Anderson, it may be time for them to move on from the veteran WR AJ Green. The Bengals legend has only hauled in 10 catches for 56 yards this season, but it may be a better picture for him in the Eagles offensive attack.

K.J. Osborn managed to unleash 655 yards and seven touchdowns in his sophomore campaign, but he’s taken a step back this season: 19 catches for 177 yards and 1 TD. Osborn could look to resurrect his career in the frigid NFC East.