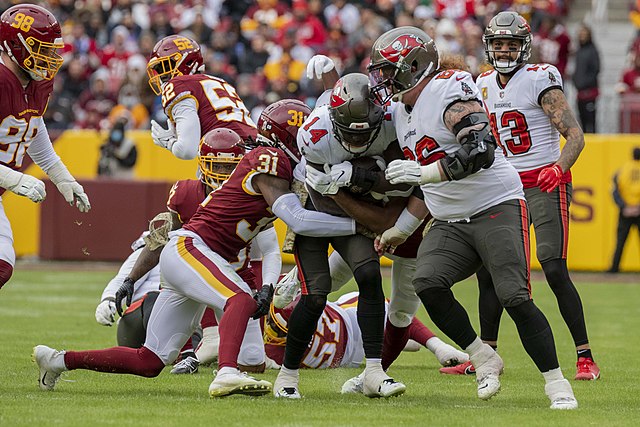 The Tampa Bay Buccaneers wide receiver Chris Godwin was geared up for a career season until he tore his ACL in Week 15 against the New Orleans Saints. Godwin ousted 98 receptions (127 targets), 1,103 yards, and five touchdowns in 14 games last season. His presence was clearly missed in the playoffs, as the Brady bunch were defeated by the Los Angeles Rams in the NFC Divisional contest.

The Bucs are obviously confident Godwin bouncing back to a superb playmaker for their Brady-led offense, as they re-signed him to a three-year – $60 million dollar deal. Godwin is only 26 years old and he should be a prolific WR for many more seasons.

Godwin has been often been a Top 8 WR in PPR with or without Tom Brady. Although, Godwin should feel happy that TB12 is unretired and that should help him return to being a slot machine. The complete absence of Antonio Brown and Robert Gronkowski should help Godwin have a career season in receptions/targets in 2022, in my opinion.

However, I’m not a huge fan of Godwin’s ability to climb the ladder beyond a likely terrific season in 2022. I expect Brady to hang up his cleats after next season, so the WR should be awarded a much less impressive QB in the post-Brady era.

The biggest difference in Godwin’s potential degression lies in the fact that the Buccaneers offensive scheme could change. I don’t like the chances of Byron Leftwich staying in Tampa Bay in the near future. He nearly left for Jacksonville this offseason and I would be shocked if he doesn’t walk on a red carpet to a new team after Brady retires. Leftwich/Bruce Arians were a big reason why the Bucs throw it around the yard with Brady or Jameis Winston. Godwin is a special route runner and consistent play-maker, but I really expect his production to noticeably dip “without Brady and the heavy passing offensive design”. It’s time to sell the potential 2022 stat machine to many fantasy owners that are surely licking their chops for his Buccaneers magic.

What does Sony Michel bring to the Dolphins?
What’s Terry McLaurin’s dynasty outlook for 2022 and beyond?